McDonald’s just added a new burger to its menu, the Bacon BBQ Burger. It is a fairly secretive release; there are only a few McDonald’s locations that this New Bacon BBQ Burger is being sold at so far, and the restaurant does not seem to be advertising it online or on TV quite yet. 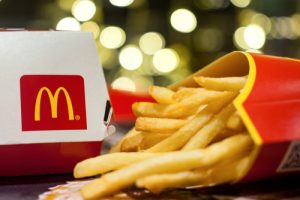 But, what we’ve seen from the burger so far is that customers can choose between a single or double Bacon BBQ Burger. Included in the burger is the beef patty, two slices of cheese (one of the top and one on the bottom of patty), fried onion rings, well-cooked bacon, and a spread of BBQ sauce on two sesame seed burger buns.

The McDonald’s Bacon BBQ Burger has some resemblance to other burgers that the restaurant previously removed from their menu, but customers can visit the local McDonald’s restaurant to see if this tangy new burger is available in their area.

According to Chef Michael Haracz, McDonald’s Manager of Culinary Innovation, “People Love Bacon, and they love our iconic Big Mac, fresh beef quarter pounder burgers and world-famous fries, so we had to see what would happen if we combined all that tastiness.”

For now, it seems as though the Bacon BBQ Burger at McDonald’s is in the testing phase. If anyone has gotten the chance to taste test the new menu item, let us know in the comments below. As for the rest of us, we’ll just have to wait and see if the burger rolls out nationwide.