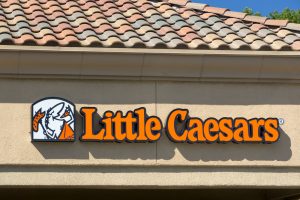 Little Caesars is a pizza chain that competes with other large national pizza restaurants such as Dominos, Pizza Hut, and Papa John’s. The big difference is that Little Caesars menu prices are the least expensive out of the major pizza chains.

Although some Little Caesars restaurants offer delivery services, they focus more on carryout. The restaurant offers less choices on their menu than the competition, which is how they can afford to keep their prices so low. Little Caesars offers large 1 topping Hot-N-Ready pizzas for only $5. In addition to pizzas, the restaurant also offers chicken wings in various flavors and spices as well as cheese bread.

Below are the latest Little Caesars menu prices.

Little Caesars was founded in Garden City, Michigan, in 1959 by Mike and Marian Ilitch. Originally, the restaurant offered many food items besides pizza such as hot dogs, shrimp, and fish, however, over the years the menu was trimmed so they could primarily focus on pizzas.

Little Caesars prices are among the cheapest in the pizza food industry. Although other chains offer coupons that lower the price, Little Caesars offers $5 Hot-N-Ready pizzas without any coupon.

For more information about Little Caesars, visit their official website.

What time does Little Caesars open?

Little Caesars opens at 11 a.m. Monday through Sunday. However, some locations choose to open their doors at 10:30 a.m. to expand their lunchtime hours. Little Caesars opening hours are at the discretion of the franchise owners, so it is a good idea to check online or call ahead to ensure that your nearest location is open when you plan to visit the restaurant or order carryout.

What time does Little Caesars close?

Little Caesars closes at 10 p.m. Sunday through Thursday and 11 p.m. Friday and Saturday. Extended hours on weekends are to accommodate for the higher amount of customers who visit the restaurants and order takeout on those days. Some locations, however, choose to remain open until 11 p.m. on weekdays, as well. These Little Caesars outlets are usually in bigger cities or popular locations. As a rule of thumb, you should always check with your local Little Caesars to see when it closes.

What year was Little Caesars founded? 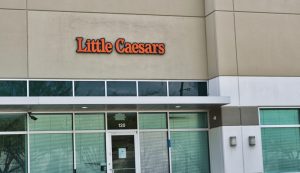 Where was the first Little Caesars opened?

In addition to Illitch Holdings, there are also entrepreneurs who can buy into the Little Caesars franchise. These are the people that own and operate outlets around the world.

How many Little Caesars restaurants are there?

There are approximately 4,400 Little Caesars restaurants in the world. The pizza chain has grown into one of the largest corporations in the industry and has plans to continue expanding its footprint.

Husband-and-wife team Mike and Marian Illitch started Little Caesars. They invested all they had into opening the first store, and fortunately for them (and the rest of the world) – the restaurant took off, and just three years after starting Little Caesars, they began to franchise and expand all over the country. 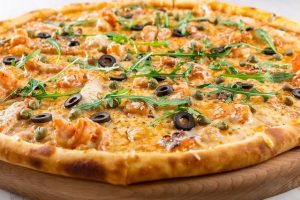 How did Little Caesars get its name?

How many slices is a Little Caesars large pizza?

A Little Caesars large pizza contains eight slices of pizza. However, if you have ever been to a Little Caesars, you’ve probably realized that they only sell one size – a 14-inch pizza – that is premade before you order it. The purpose of serving one size of pizza is to offer customers a quick and convenient experience, as well as eliminate the wait time that normally comes from a pizza being made after ordering it.

What is the healthiest thing to eat at Little Caesars?

The healthiest thing to eat at Little Caesars is a Little Caesars Pizza. While it is not necessarily a nutritious meal, one slice of pizza offers the lowest number of calories, fat, and sodium out of anything on the menu.

Can I get a job at Little Ceasars?