Culver’s is a fast-food restaurant that mainly operates in the Midwestern parts of the United States. Its trademark foods are ButterBurgers and frozen custard. Culver’s menu prices are usually more expensive than the industry’s average, and that’s partly because their food servings are larger.

Below are the latest Culver’s menu prices.

Culver’s was founded in 1984 in Sauk City, Wisconsin, and today it is headquartered in Prairie du Sac, Wisconsin.

Culver’s prices are considered to be higher than the average fast food industry because they’re categorized as somewhat of a novelty fast food due to their wide range of offers in frozen custard. Their menu is similar to that of Steak ‘n Shake.

To view more information about Culver’s, visit their official website. 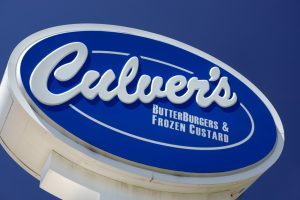 Which states are Culver’s in?

Culver’s is in 25 states. They are located mostly in the Midwestern states, and there are 18 more restaurants under construction.

What time does Culver’s open?

Culver’s opens at 10 a.m. seven days a week depending on the store’s location. However, the opening hours may differ on holidays, so just be sure to view their website.

What time does Culver’s close?

Culver’s closes at 10 p.m. In some locations, the closing hours may differ by one or two hours, so be sure to use the official website to confirm.

What year was Culver’s founded?

Culver’s was founded in 1984. They barely survived because of tough competition, but Culver’s was known for their butter burgers and frozen custards and has ever since grown to become one of the most popular fast food franchises in the country.

Where was the first Culver’s opened?

The first Culver’s was opened in Sauk City, Wisconsin. Culver’s has extended from Minnesota to Florida and many states in between. There are some locations they haven’t opened yet, but there are plans to expand throughout the entire US.

Culver’s is owned by Roark Capital Group. Roark is big in the quick-serve game with holdings in the principal company that owns many other well-known restaurants like Carl’s Junior, Hardee’s, and Moe’s.

How many Culver’s restaurants are there?

There are 710 restaurants in 25 states. Amazingly, out of the 710 restaurants, there are six that are company-owned and the rest are operated and owned by independent franchisees.

Culver’s was started by Craig Culver and his family. The original Culver’s was owned and managed by his parents George and Ruth Culver with the business name as Sauk City A&W Rootbeer. This business was sold, and they later managed a country club. Craig later left college and bought back the A&W, which he operated for a few years and then later sold A&W Rootbeer again. Two years later he gave it another shot and with a huge transformation. He reopened A&W Rootbeer and renamed it Culver’s Butter Burgers and Frozen
Custards.

How did Culver’s get its name?

Culver’s got its name from a dollop of butter on the crown of the bun, which gives it a toasty and buttery flavor. Most have the imagery of a bun dipped in loads of butter, but the name is a misnomer. The Butterburger from Culver’s isn’t really a “butter burger.”

What is the healthiest thing to eat at Culver’s?

The healthiest thing to eat at Culver’s is their: