Dunkin’ Donuts is a fast food restaurant that serves mainly donuts and coffee. Dunkin’ Donuts menu prices are based on the idea that donuts should be purchased in 1/2 dozen or dozen packs. Even though they sell individual donuts, the bulk options are a much better value.

Dunkin’ Donuts serves many items such as hot coffee, iced coffee and teas, frozen beverages such as Coolattas, sandwiches, and bakery goods like donuts, muffins, bagels,  cookies, and munchkins. Although their menu is quite large, they’re best known for their coffee and donuts.

Below are the latest Dunkin’ Donuts menu prices.

Dunkin’ Donuts was founded in 1950 in Quincy, Massachusetts by William Rosenberg. The restaurant gained success quickly and it became the favorite coffee and donut restaurant of many people.

Compared with the rest of the fast-food industry, Dunkin’ Donuts prices are higher in many scenarios, however, they’re competitive with their direct competitors such as Starbucks and Krispy Kreme. 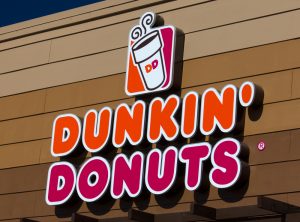 What time does Dunkin Donuts open?

Dunkin Donuts opens anywhere from 4:30 a.m. to 7 a.m. depending on the location. Usually, opening hours are subject to the franchise owner’s discretion. Stores that open at 4:30 a.m., for example, are typically in metropolitan areas of the country where there are a higher number of customers awake and active at earlier hours of the day.

What time does Dunkin Donuts close?

Dunkin Donuts closes anywhere from 8 p.m. to 10 p.m. depending on the store’s location and time of the week. Many stores stay open until 8 p.m. Monday through Thursday and Sunday and choose to close at 10 p.m. on weekends to accommodate the higher foot traffic on Friday and Saturday nights. Just like opening hours, closing hours are up to the franchise owner.

What year was Dunkin Donuts founded?

Dunkin Donuts was founded in 1950. However, the business opened its doors for the first time in 1948 under a different name: Open Kettle. After two years in business, Open Kettle’s founder, along with a team of executives, decided to change the name to Dunkin Donuts. The business has grown from a single coffee shop to one of the most successful franchises in the fast food industry. And while Dunkin Donuts was originally started with donuts and coffee in mind, some of their best-selling menu items are their breakfast sandwiches.

Where was the first Dunkin Donuts opened? 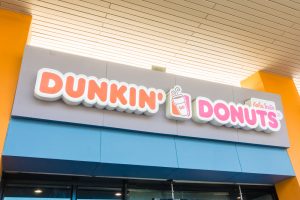 Dunkin’ Brands Group, Inc. owns Dunkin Donuts. They also own Baskin-Robbins, which is why you sometimes see the two restaurants sharing a building. From time to time, Dunkin Donuts and Baskin-Robbins will even collaborate with their menu items, from serving ice cream flavored coffee to coffee-flavored ice cream.

How many Dunkin Donuts restaurants are there?

There are nearly 11,300 Dunkin Donuts restaurants spread across the globe. 8,500 of those coffee shops are found in the United States, with 600 of them in New York City alone.

William Rosenberg started Dunkin Donuts. Rosenberg always had business on the brain, even as a kid. He started working in his early teens and developed a relentless work ethic. After advancing in his career, Rosenberg decided to go off on his own and start a catering company, where he unexpectedly found himself selling more coffee and donuts than anything else on the menu, leading to the opening of Dunkin Donuts.

How did Dunkin Donuts get its name?

Dunkin Donuts got its name after being open for business for two years under the name Open Kettle. After realizing that the restaurant’s best-selling items were coffee and donuts, the team decided to change the name to better reflect their business.

Where are Dunkin Donuts made?

Dunkin Donuts are made in a kitchen at the restaurant. Some Dunkin’ locations, however, have their donuts delivered from another Dunkin’. It depends whether the location has the proper equipment to bake them on-site, which is typically decided by the franchise owner. Some locations also get them delivered frozen and bake them in the store. 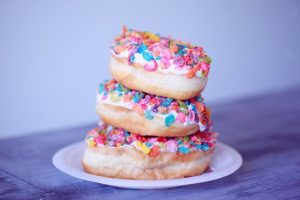 How many ounces are in a medium Dunkin Donuts coffee?