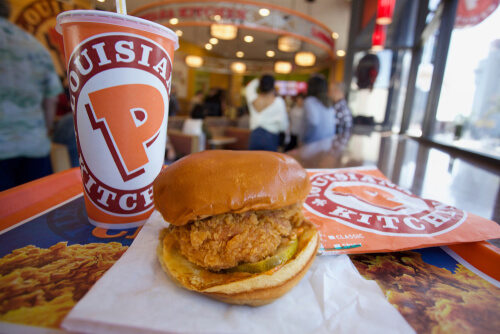 Popeyes, also known as Popeyes Louisiana Kitchen, is a fast food restaurant chain originally from Louisiana that mainly sells fried chicken. Popeyes prices are comparable to that of other fried chicken restaurants such as Church’s Chicken and Kentucky Fried Chicken.

Some of the most popular chicken dishes include the famous Popeyes chicken sandwich, wings, tenders, nuggets, and legs, but you can also find popcorn shrimp and a variety of sides like mashed potatoes with gravy, Cajun fries, Cajun rice, green beans, and biscuits on their menu.

Below are the latest Popeyes menu prices.

Popeyes was founded in 1972 in Arabi, Louisiana, however, it is currently headquartered in Sandy Springs, Georgia. Popeyes has over 2,000 restaurants in over 22 countries in the world making it the second largest fast food chicken restaurant.

The food from Popeyes has a very distinct taste and is very different than the average fast food chicken. It offers many of its meals in a spicy variation. Popeyes prices are very competitive to rest of the industry, and if you are planning on feeding your entire family, try their family meals which offer a much better value. 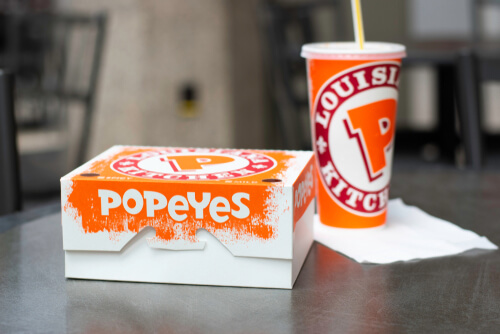 What time does Popeyes open?

Popeyes opens at 10:30 a.m. Monday through Sunday. You can check online to verify your location as to their opening hours.

What time does Popeyes close?

Popeyes closes at 10 p.m.  Monday through Thursday and Sunday. On Friday and Saturday, Popeyes closes at 11 p.m. Certain franchises may close at different times, so check with your local restaurant to confirm. Popeyes is closed on certain holidays, as well. Just be sure to verify on which days they are closed.

What year was Popeyes founded?

Popeyes was founded in 1972. At this time, it was called “Chicken on the Run.” Just months later, the founder changed the name to Popeyes because the restaurant was not performing very well. Popeyes is known for its famous fried chicken and biscuits. With many locations worldwide, everyone refers to Popeyes as having the most delicious chicken. 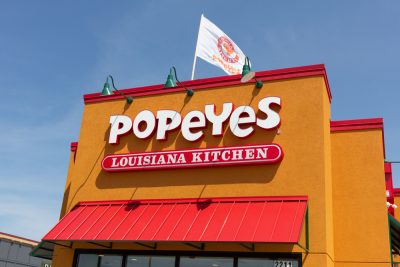 Where was the first Popeyes opened?

The first Popeyes was opened in New Orleans, Louisiana. Popeyes was formerly known as  Popeyes Chicken & Biscuits until eventually the name was changed in 2008 to Popeyes Louisiana Kitchen Inc. With a slow start at the beginning, business improved down the road, and Popeyes became one of the biggest multinational fast-food chains in the world.

How many Popeyes restaurants are there?

There are 3,102 Popeyes restaurants. They are located in more than 40 states and 30 countries worldwide.

Popeyes was started by Al Copeland. Not only was he an entrepreneur but also a successful restaurateur. Popeyes wasn’t his first business, however. Prior to opening the fast-food restaurant, he ran many other successful businesses. 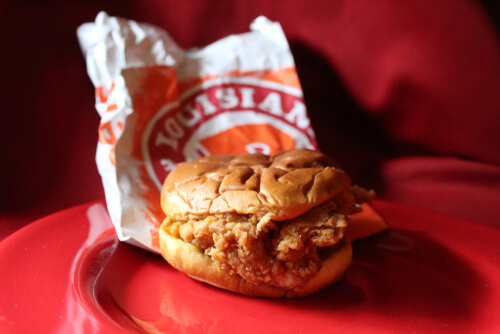 How much is a Popeyes Chicken Sandwich?

The Popeyes Chicken Sandwich is around $3.99. If you order the sandwich as a combo meal with a side, biscuit, and a drink, it will be closer to $8.00. However, prices may vary by location.

When Did Popeyes Chicken Sandwich come out?

The Popeyes Chicken Sandwich came out on August 12, 2019. Just two weeks after the launch of the sandwich, Popeyes was sold out until that November because of how popular it was. To this day, people still talk about how the restaurant sold out so quickly.

How did Popeyes get its name?

Popeyes got its name from a famous fictional 70s detective show, “The French Connection.” The character’s name was Jimmy Popeye, and Al Copeland loved his character, so he went for the name Popeyes.

Does Popeyes still have $5 box?

Popeyes has a $5 2-piece chicken dinner on their menu. This includes two pieces of Signature Chicken, a regular side, and a biscuit.

What is Popeyes $10 special?

There is not currently a $10 special at Popeyes.

What is Popeyes $20 meal deal?

There are two $20 meal deals available, the 10 Piece Family Meal and the 14 Tenders Family Meal. Each meal comes with two large sides and five biscuits.

What is the best thing to order at Popeyes?

The best thing to order at Popeyes is the Chicken Sandwich.

How do I get free Popeyes?

Does Popeye’s have a senior discount?

Popeyes has a senior discount of 10% for customers who are at least 55 years. You can also get a free drink.