Whataburger serves larger-than-usual patties and buns. People tend to associate this fast food chain with Texas (it started in Corpus Christi, after all) but now boasts more than 760 locations spread out over 1o states and growing. Quite a few surveys rank it top of the list when it comes to the best burger in the country. Now you may have tried out all the Whataburger classics, but have you tried the items off the secret menu yet?

The Whataburger secret menu is rather extensive, and that’s because the employees are often very accommodating when you make requests. And that’s essentially what secret menu items are. They’re variations that customers have asked for over the years, and some of them were ordered enough times they went viral. 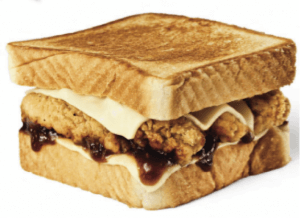 This is arguably the most popular item on the Whataburger secret menu. It’s so popular that there’s a Facebook campaign run by passionate devotees who want to make this a permanent part of the menu.

If by any chance you stumble upon a Whataburger worker who doesn’t know what this is, describe it as a regular chicken strip sandwich, except it comes with BBQ sauce. What makes this part of the secret menu is that you can’t always be sure that the place has any BBQ sauce on hand. If they don’t have the BBQ sauce, maybe you can ask them for whatever seasonal ingredients they have handy instead.

If the Honey BBQ Chicken Strip Sandwich has a rival in popularity, it is this drink. It also has its own Facebook page. Its green color explains the name, and it will turn your tongue green too.

Making the Hulk doesn’t really require anything that’s exclusive to Whataburger. What makes this the Whataburger Hulk is that only Whataburger folks are willing to make it for their customers. It’s made by filling a cup of ice about ⅛ to ¼ full with Powerade. Then you add Vault soda until the cup is full.

Sometimes you and your friends come in and one doesn’t really want a burger. But in that case, that person can enjoy two slices of toast sandwiching gooey melted American cheese. Since it’s so simple, it really is so cheap. But the taste!

In-N-Out has trademarked the Double-Double term, but that doesn’t mean Whataburger can’t serve its own version. That’s especially true when it’s on the secret menu. So just ask for it by name, and if the employees aren’t familiar with it then you can ask for two beef patties, layers of cheese on top of the patties, and all the veggies you want. 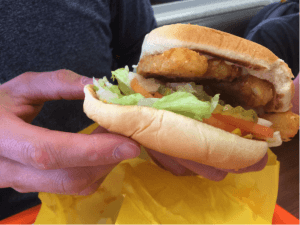 Now if the idea of eating “all the veggies you want” really gets you going, then you may try this special veggie burger from the secret menu. While other joints may simply take out the beef patty, Whataburger replaces the beef patty with the potato hash brown patty.

This is Whataburger’s response to chicken and waffles, but you can’t really ask for it as a single item. And you have to pick the right time to order it and that’s during the breakfast hours of 11 pm to 11 am. During this time, you can order the pancakes a la carte. You can then also order the biscuit sandwich which comes with the chicken strips.

So ditch the biscuit or eat it later, and you have chicken with pancakes. You get all these with just an entrée and an a la carte item!

This is the Breakfast on a Bun with either bacon or sausage. The Ranchero version includes jalapeños in the scrambled egg, and they also put in red or green (whichever you want) picante sauce.

This is the secret menu item that really lengthens this list if you want to be technical about naming each option. That’s because this is not a specific burger, but rather a burger category. This is the Whataburger with any combination of the regular toppings (like ketchup, mustard, cheese, tomato, lettuce, onions, and pickles.) And because Whataburger locations are usually really cool about requests, they let you have your burger your way.