Subway is a fast-food restaurant that primarily sells sub sandwiches and salads. Because of that, they are generally considered to be one of the healthier choices when it comes to fast food. They sell sub sandwiches in 2 sizes, 6-inch and 12-inch, otherwise known as footlong. 6-inch Subway menu prices are very affordable, but the footlong subs are a better value. If you are looking for a catering menu, you can view Subway catering prices here.

There are over 35,000 subway restaurants in over 100 countries worldwide. Subway has quickly gained popularity with the rise of health-conscious consumers of the 21st century.

Below is a list of all recent Subway menu prices.

Subway was founded in 1965 in Bridgeport, Connecticut by Fred DeLuca and Peter Buck. It has quickly become an internationally-known brand of healthy fast-food restaurants. We aim to provide you with up-to-date Subway prices. 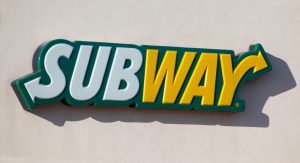 What time does Subway open?

Subway opens at 7 a.m. Monday through Sunday. This time may vary by location, so be sure to verify with your nearest restaurant.

What time does Subway close?

Subway closes at 10 p.m. Monday through Sunday. Hours may vary based on your location. 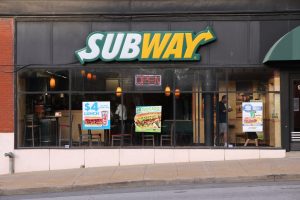 What year was Subway founded?

Subway was founded in 1969. Previously named Super Submarines, Fred DeLuca got a loan from his friend to start his business. A few years later they expanded, and the sandwich shop was renamed Subway.

Where was the first Subway opened?

The first Subway opened in Bridgeport, Connecticut. Subway is well known for its salads and subs. Their slogan “Eat Fresh” says it all. They believe each menu item is to be served fresh each day to customers.

How many Subway restaurants are there?

There are 42,000 Subway restaurants in 111 countries worldwide.

Fred DeLuca and Peter Buck started Subway. The duo established Doctor’s Associates Inc in order to manage their franchise. They also wanted to gain an income from their company to pay for their school.

How did Subway get its name?

Subway got its name from Fred DeLuca, who borrowed $1000 from his friend Peter Buck. The restaurant previously named “Pete’s Submarines” was named after the most famous sandwiches back then, “submarine sandwiches.” After the expansion of the business many years later, it was changed again to “Pete’s Subs.”

What time does Subway serve lunch?

Subway serves lunch all day. Many stores are open 24 hours a day, while some close at certain times during the day. Checking your nearest Subway location would be a great help. 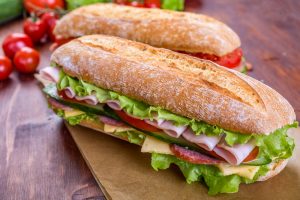 What kind of bread does Subway have?

Subway has a variety of different bread, including white bread, flatbread, whole grain, wraps, and a variety of 9 Grain Honey Oat and Parmesan Oregano bread.

How to order at Subway:

You can first review the menu, and the worker will ask you to begin ordering whenever you’re ready. Tell them your size bread (six-inch or footlong), select meat(s), and add vegetables, cheese, and condiments to your sub. At the end, you can tell them if you want your order to be a combo meal, or if you’d like to add any chips, drinks, or desserts.

What kind of vinegar does Subway use?

Subway uses Red Wine Vinegar. This vinegar has 5% acidity, according to Subway.

What kind of oil does Subway use?

Subway mostly uses canola oil, but sometimes it is a blend of 10% olive oil.

What kind of cheese does Subway have?

Subway has a number of different cheeses. These include American Cheese, Provolone, Pepper Jack, Swiss, Cheddar Cheese, and a Monterey Blend.

Subway stops serving breakfast at 11:00 a.m. After this time, eggs are removed to prepare for the lunch orders. Just be sure to verify based on your location.