You are here: Fast Food Prices > A Walk Down Memory Lane with Dairy Queen History

It’s a sunny day, and you suddenly crave ice cream, what’s the first thing that pops into your mind? Going to the nearest DQ store! You can grab a cup of their famous DQ Shakes, a bowl of banana split and sundaes or the all-time favorite DQ Blizzard! We all have our own preferred DQ dessert, of course.

DQ, or Dairy Queen, is a chain desserts shop and restaurant that offers both soft-serve desserts, especially ice cream, and hot food. It is run by the parent company International Dairy Queen, Inc. which is a subsidiary of Berkshire Hathaway. It is also a sister company of Karmelkorn and Orange Julius because they have the same owner.

Before it became the famous and big dessert and fast food restaurant it is now, it started out small, too. Find out it’s history through its logos here:

Do you want to know who was behind the magical recipe of soft-served ice cream? It was father-and-son John Fremont McCullough and Bradley McCullough who have formulated the now famous ice cream. They partnered with Sherb Noble, their friend and avid costumer, to operate the business by offering the ice cream in his store in Illinois. On their first day, they dished out 1600 desserts in just two hours! This success has led them to open their own restaurant. 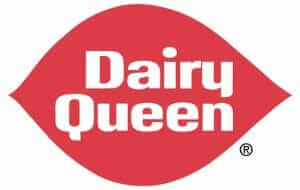 The first ever DQ restaurant was opened in Joliet, Illinois on June 22, 1940. It served assorted frozen products highlighting their famous soft served ice cream. Up until today the building is preserved and is a city-designated landmark at Chicago St. even though it has stopped its operation since the 1950s.

Their first logo was mainly used in their drive-in restaurants. It’s usually printed on their signature blue blade. 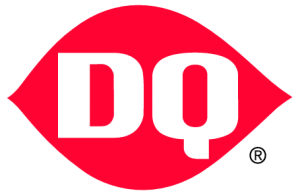 In 1960, Dairy Queen changed the logo. It had a different font and the color was changed to white. The new word mark was placed inside a red lip background. In the 1980s, an alternate version of this logo was presented to the market. However, this one remained more popular. Then, the first DQ store in Canada was opened in Saskatchewan. This store used this logo in their spoons.

This logo lasted until the early 2000s, but you can still find it used in some branches in Canada nowadays.

Through time and modernization (2001-2006), the logo was altered. The wordmark was abbreviated to just “DQ”. This logo was only used as a secondary logo for cups, signs and packaging. This logo can still be seen in some locations.

A modification in the logo was made in the year 2006. The red lip shaped background was evened out and orange and blue stripes were added to to the top and bottom of the logo. These lines are made to represent the main offers of the chain restaurant– the orange represents the hot foods and the blue represents the ice cream and dessert products. The “DQ” letters were italicized and change into Seriff font. This is now the font that we see in their restaurants nowadays.

An earlier variant of this logo in 2001 uses the old font introduced a new restaurant known as “Grill & Chill”. 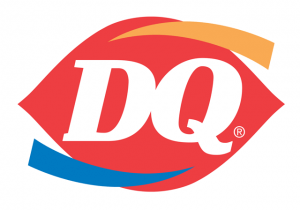 In 2007, Dairy Queen has spelled out a version that’s primarily imprinted on their signature red spoons. We now see this at some new locations and mall stalls.

Nowadays, DQ restaurants are scattered all over the world. In the US, Texas is the state with the most Dairy Queen stores. It has over 5,600 stores worldwide.