Out of all the secret menus we’ve come across, the Dairy Queen Secret Menu is by far one of the most popular. It contains treats that customers have come up with, as well as treats that once graced the regular menu for a limited time. From blizzards to shakes and food items, there’s something everyone can enjoy. And as long as your local DQ carries the ingredients that go into the treats, chances are they can make it – it’s just a matter of if they are willing to bend the rules. Asking nicely helps.

Some people will argue that there is no “real” Dairy Queen Secret Menu because you can customize your order however you want anyway. Rather, there are delicious customer creations that not everyone knows about… until now, that is. Check out these new blizzard flavors, as well as some throwbacks that you may have seen before.

Keep in mind as you order that Secret Menu treats are only available at participating locations who have the right ingredients on hand. 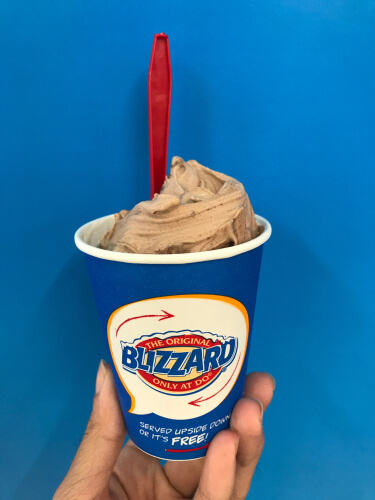 In the winter months, Dairy Queen often adds a hot chocolate-flavored blizzard to the menu. For instance, they debuted the Peppermint Hot Cocoa Blizzard at the end of 2019, and prior to that, they have also whipped up an Oreo Hot Cocoa Blizzard. From these fancy creations, the Secret Menu Frozen Hot Chocolate was born. It’s a thick, blended drink that tastes exactly like it sounds.

The Brownie Batter Blizzard is one of the most popular Dairy Queen menu items in history. So, while it is not a customer creation, we still consider it to be a Secret Menu treasure because it is not always listed on the regular menu. This delectable treat has a base of vanilla soft serve that is combined with brownie batter. Brownie chunks are folded into the blizzard. However, since this treat is not on the regular menu right now, they may not have brownie batter mix available. In this case, you can opt for chocolate ice cream and brownie pieces.

The Banana Split Blizzard is another treat that has graced the DQ Blizzards menu in the past. But since it is no longer a regular menu item, it’s made its way onto the Dairy Queen Secret Menu.

This is one of the most popular Secret Menu items because it was a fan favorite while it was on the normal menu. So, after the limited time offer was pulled from the menu, customers searched high and low to figure out what the heck was in this blizzard. Here you have it: The Midnight Truffle Blizzard contains a base of vanilla soft serve blended with dark chocolate fudge. Pieces of truffle bites are mixed in, as well. 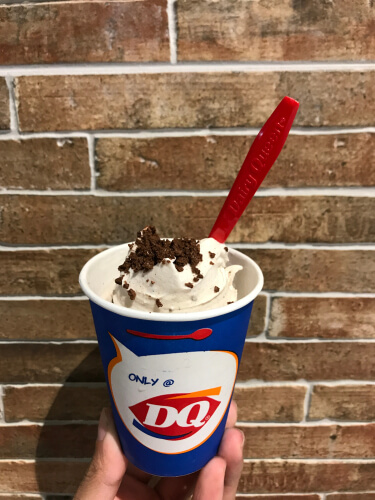 If you want a classic comfort treat, order the Chocolate Chip Blizzard. This treat has a base of vanilla ice cream and has chocolate pieces blended into it. Note: the pieces are not chocolate chips – they are chocolate chunks created out of the chocolate dip that is used for chocolate-dipped cones.

This treat is not one of the Dairy Queen Blizzards that originated on the Secret Menu. It’s been offered on the regular menu before but not as a permanent menu item. However, that shouldn’t stop you from attempting to order it, which is why we’ve added it to our list. The S’mores Blizzard is a blend of vanilla soft serve, marshmallow, hot fudge (chilled), and graham crackers.

If you’re in the mood for one of Dairy Queen’s classic treats, try the Rootbeer Float. It’s not a secret what’s in it, but it is one of the most beloved Dairy Queen Secret Menu items.

Relive your childhood with the Peanut Butter and Jelly Shake. This Dairy Queen Secret Menu item is made by combining a peanut butter shake with strawberry toppings.

The Hawaiian Blizzard was discontinued from DQ a while back, but you can still order it at most locations! This secret menu item is a simple blend of vanilla soft serve, coconut, pineapple, and banana.

If you have not tried an Oreo Blizzard at Dairy Queen, chances are you live under a rock. It is one of their bestsellers and will probably be on the menu until the end of time. If you’re a fan of it, try order the Mint Oreo Blizzard, which simply swaps the vanilla ice cream for mint.

If you’re a coffee lover, you’ve got to try this rich, creamy blizzard. It’s a blend of DQ’s coffee syrup and vanilla soft serve. What a beautiful combo. Keep in mind – there isn’t much caffeine in this concoction, but it takes just like the frozen (and sweetened!) version of your favorite cup of joe!

For an even tastier treat – swap the vanilla ice cream for an Oreo blizzard. You won’t regret it.

You know that fluffy marshmallow sauce at DQ? If you want to eat it my the spoonful, you finally can. Just order a Marshmallow Creme – a vanilla soft serve sundae topped with an added serving of marshmallow creme.

DQ French fries are decent, but we’ve got a simple way to take them to a new level. Ask for an order of Cheesy Fries, which combines the queso that normally comes with pretzel sticks, shredded cheese, and an order of fries. If you’re not sure about this one, just try ordering fries with a side of queso to dip them in.

Moment of truth: you can order a grilled cheese at nearly any fast food restaurant, even if it is not on the menu. However, we felt obligated to list it here. If you’ve ever ordered a meal from DQ, you know that they come with a side of buttery Texas Toast, which just so happens make the most extraordinary grilled cheese. 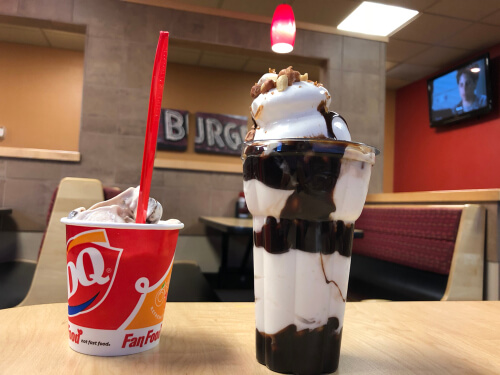 Ordering a parfait may not be the first thing you think of when you head to DQ, but this classic secret menu item is a no fail option if you’re in the mood for a sundae. The Peanut Buster Parfait has graced the Dairy Queen menu in the past, but it has been discontinued at most locations. Fortunately, you can still order it because the three ingredients are available at every location – vanilla soft serve, hot fudge, and crunchy peanuts.

If you think a Vanilla Blizzard sounds a bit bland, you’d be right. While you can order a Vanilla Blizzard all on its own, we’ve included it because it’s the gateway to creating any kind of blizzard you want. Sometimes, if you order from the Secret Menu, the DQ worker may not know exactly what you’re talking about. If this is the case, all you need to do is order a Vanilla Blizzard and ask for all of the ingredients to be added in, whether it’s marshmallow, chocolate chips, hot fudge, or Oreo pieces.

To learn more about DQ deals and discounts, check out our Dairy Queen Happy Hour page.