You are here: Fast Food Prices > Environment-Friendly Restaurants Chipotle and The Flame Broiler: A Gimmick?

Restaurants will do anything to get more customers. Every slant, promo or gimmick that restauranteurs can get their hands on, has been used just for them to pull customers in. They have every trick up their sleeves too, from price slashes, two-in-one promos, to all-day buffets. Admittedly, these promos work for most of us because they ease up the budget and let us eat more.

The latest craze nowadays is political correctness. Fast foods like Chipotle and The Flame Broiler have jumped on the bandwagon too, claiming that they have our best interest in mind. But just how true are such claims?

The Flame Broiler started with Young Lee, an entrepreneur who thought that fast food chains weren’t serving healthy food. They started out as a small joint, serving simple folk with simple and lean food. Also, their culinary concept is fresh with Asian fusion in mind. At present, they have around 170 establishments and is still growing.

They have delicious food that draws a lot of customers and a lot of health buffs as well. Their bestsellers are the veggie and chicken on brown rice, half and half, or half chicken and half beef and vegetables and special sauce. Calorie count is also low as the rice bowls would only be from around 500 to 600 calories per bowl. 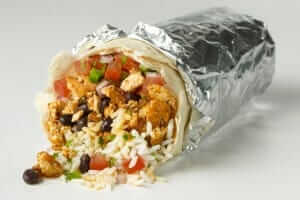 Customer feedback is mostly positive, with a lot of people giving praises to the freshness of chicken and beef, and more people drooling over brown rice. Most reviewers have ordered chicken, and they love the fact that it’s not greasy or deep-fried. Those who ordered half-and-half commented on how the Angus beef was juicy and tender. The special flavoured sauce was indeed addicting, they claimed.

However, there are also people who complained that the food was not as good anymore. There were bad reviews stating that they didn’t have much selection. Some even said that their order hardly came with vegetables, as they previously had. They also commented that the service was not good, and the staff not so helpful. There were problems with parking too.

Another restaurant who claimed to be eco-friendly is Chipotle. This restaurant is a Mexican grill fast food. They claim that they serve the freshest beef compared to other fast food restaurants. Their philosophy is to serve environment-friendly and farmer-friendly food, or as what they call “food with integrity.” This fast food started in 1993 in Colorado, and is now found all over the world with branches in the United Kingdom, Germany and Canada.

Chipotle specializes in burritos, tacos, rice bowls and salads. Compared to the Flame Grill, they have more food to offer and a larger variety of toppings such as beans, salsa, sour cream and lettuce.

Chipotle’s specialty is the burrito, or a tortilla wrapping around adobo-marinated meat, black beans, salsa, and cheese. Their tacos have basically the same contents as the burrito, the only exception would be the added lettuce and taco shell. The bowl is a concoction of cilantro-lime rice, pinto or black beans, meat or guacamole, salsa and cheese or sour cream.

But the bad reviews are so overwhelmingly disappointing. Many have given comments to the restaurant online, and they said that the restaurant is just not good anymore. The meat is not fresh, as they claimed, and it felt like the staff was not even happy with being there. Employees were not dressed properly and did not look responsible. Some customers complained that they did not get their pre-ordered meal. There were also comments that some outlets did not have enough supply.

If you go to management and complained about their poor service, they will toss a free meal and not do anything to repair the problem. Most of the complaints of people who reviewed Chipotle came from poor customer relations. And eventually got turned off with their food. This makes customers wonder about the restaurants’ boasting of “integrity”.

In the end, whether restaurants make giant claims on political correctness, integrity, and respect with food, their real intentions will reflect on their food and service. It would be better off for a smaller chain, like The Flame Broiler, to have a simple menu, and stay with their principles of freshness and of the food being organic. The Flame Broiler is smaller than Chipotle but they receive more good reviews than Chipotle, which seemingly have just thrown their backbones out.

The bottom line is that whatever gimmick fast foods release to the market, customers should always know better – and some of them don’t care about what political inclinations the restaurant might have. The customer will still look for quality and value for money, whether the restaurant is eco-friendly or not.