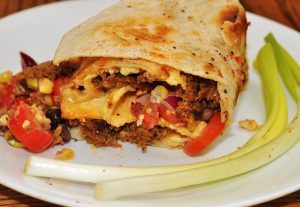 Chorizo is fully-cooked and cured Mexican pork. It’s spicy and often served with breakfast or in another dish. It’s slightly similar to sausage, except sausage is raw and seasoned with fennel or anise, resulting in a less spicy flavor. Chipotle had only changed its main menu once, in 2014, when it added tofu sofritas. But in 2016, the Mexican grill added chorizo to the menu in five different markets. With successful responses, the chorizo was released in all stores nationwide. Let’s see how it’s stood the customer taste test in this Chipotle Chorizo Review.

Though chorizo was initially received well, its success was short-lived. Chipotle announced in September of 2017 that it was removing chorizo from the menu and replacing it with queso. But this move wasn’t popular with customers who didn’t particularly like the chain’s version of queso at that point. Remember that it took a couple of attempts to find a queso recipe customers enjoyed.

Chipotle’s chorizo was a great addition to many Mexican food flavors, giving one more delicious meat option for burritos, tacos, and burrito bowls, and it could also be combined with other signature ingredients. While it wasn’t a favorite item, it sold well and received decent reviews, so why remove it? Chipotle customers felt that if the chain were going to discontinue menu items, then it should replace them with better ones – and the newly-released queso wasn’t cutting it.

A year after this disappointing news, Chipotle decided to re-release their chorizo in 2018. Chris Brandt, chief marketing officer at Chipotle, said, “As part of our overall commitment to menu innovation and delivering the craveable food our customers love, we’re spicing things up and bringing chorizo back to our menu.”

While there is only one type of chorizo at Chipotle, it can be added to any dish, including burritos, burrito bowls, tacos, and salads.

Prepared with a blend of pork and white-meat chicken, Chipotle’s chorizo is made with real ingredients. It’s seasoned with paprika, toasted cumin, and chipotle peppers, then seared on a hot grill to give it a perfect char. The chain uses Responsibly Raised pork and chicken in its chorizo, meaning that the animals are raised in more humane ways, just like their other meats.

The chorizo texture was a bit firm but crumbly, a tad on the dry side, tender on the inside, but fairly easy to eat. You might compare it to tough, seasoned ground beef with Mexican flavor flair. It’s salty and seasoned with cumin, paprika garlic, onion, and a bit of heat, but not too much so that it burns your mouth. You’ll detect a slight smokiness as well, and it tastes pretty good in a burrito or a burrito bowl.

Unfortunately, Chipotle’s chorizo is one of the least healthy protein options on the menu, as well as the fattiest. One 4-ounce serving has 300 calories and 13 grams of fat. The sodium level is also pretty high compared to the other options. One serving has 810 milligrams. The one good thing about the chorizo is the protein content, but the chicken has just as much protein with half the fat and calories.

The chorizo is just one more protein option, and if it’s available, why not try it? It might not be the most popular meat, but it offers a flavor variation that’s just different enough to be excited about. I like to even spice out with sour cream and cheese, but the flavor combinations are endless at Chipotle. I’d say it’s worth it to try at least once.

The chorizo is heavily seasoned and salted. So while you might have heard that you shouldn’t add a lot of toppings with chorizo, in this case, I’d recommend doing the opposite. Take some of the saltiness away by adding lots of other veggies, toppings, and condiments. You’ll still get that flavor kick without the overwhelming spices. I’d recommend ordering chorizo in a burrito bowl or a burrito. But then again, those are my favorite menu items anyway.

Have you been able to catch Chipotle Chorizo when it’s available on the menu? How do you prefer to eat it, and how would you compare it to any of the chain’s other protein options? We’d love to hear in the comments below.