You are here: Fast Food Prices > Taco Bueno – The Best Tex-Mex in Town

There are literally dozens of different establishments in the country that focus on Mexican cuisine as well as its Tex-Mex off-shoot. Some have been successful while others have withered and died amidst the competition. If there’s one that has stood strong against the test of time, it’s Taco Bueno.

Taco Bueno focuses on Tex-Mex dishes but it doesn’t serve the greasy, unhealthy variety that most people are familiar with. Taco Bueno utilizes the freshest ingredients, ensuring that each dish represents the best of its kind.

Only at Taco Bueno will you find the richest flavors blended into some of the most genuine Mexican recipes this side of the border. If there was any fast food chain that knows what it is and is proud of it, it’s Taco Bueno. It’s worked for five decades and Taco Bueno doesn’t seem like it has plans of changing this approach.

The History of Taco Bueno 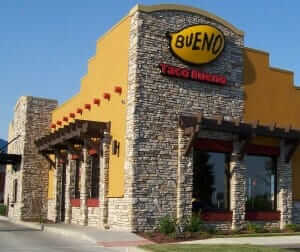 Taco Bueno has a very rich history that began all the way in the early 1960s. The founder, Bill R. Waugh, lived in Texas and was well exposed to the Mexican dishes making their way up north. A lot of Americans were altering the dishes and this gave birth to the Tex-Mex people know and love today.

Unfortunately, a lot of these early Tex-Mex recipes weren’t as good as they should have been. Not only have they altered the original recipes a little too much but they’ve also ruined the health benefits and rich flavors that the originals were known for.

Bill R. Waugh, an art graduate from the Abilene Christian University, understood this and wanted to blend the two together to create the perfect Tex-Mex establishment – it would focus on Tex-Mex food to satisfy customers of all places but it would use only the freshest of ingredients.

That was when Taco Bueno was born.

The first branch opened in 1967 in Abilene, Texas. From 1967 and throughout the 1970s the franchise quickly grew. But starting in 1981 the company began to switch hands multiple times.

In 1981 Taco Bueno was bought by Unigate, a British food manufacturer. This lasted for fifteen years because in 1996 the company was then sold to CKE Restaurants, the same corporation that owned Carl’s Jr.

Then in 2001 CKE Restaurants sold Taco Bueno to the Jacobson Partners for a total of $72.5 Million in a move to get out of debt. By 2005, Taco Bueno was again sold off, this time to Palladium Equity Partners.

Taco Bueno features a Throwback Thursday gig where they offer items that were previously removed from their menu for one reason or another. This promo, which began in late 2014, has already seen four old items revived in their menu choices.

For the longest time Taco Bueno featured lemonade as one of their signature drinks but this has been replaced with the addition of Piña Colada smoothies. Taco Bueno has also added limited offer menu items such as their special Southwest Empanadas, Bueno Bowls, and Chorizo.

A Look into the Taco Bueno Menu

One of the best seller hits from Taco Bueno is the “Mexidips and Chips”. Two bowls of corn tortilla are layered with guacamole, queso, and refriend pinto beans. It is one of the most popular hits from the company is a fan favorite amongst regular customers.

If you are looking for healthier choices then you will have to look into the Bueno Choice Menu. All the items in this menu contain less than 450 calories are a great fit for people who want Tex-Mex food but in a healthier variety.

For burrito lovers there is the Big Ol’ Burrito or BOB. This is a 12-inch flour tortilla filled with lettuce, cheddar cheese, tomatoes, chili sauce, sour cream, and the customer’s choice of diced steak, diced chicken, or taco meat.

There is also a breakfast menu which includes choices such as chorizo, egg burritos, and breakfast quesadillas. The addition of the breakfast menu was to cater to people not looking into heavy, meaty meals early in the day but still in hope of getting something Tex-Mex.

Yes, there are many other establishments selling Tex-Mex food but only Taco Bueno offers genuine recipes and fresh ingredients that no other chain can boast of. It’s different because it approaches Tex-Mex with respect instead of just cashing in on the current craze for Mexican dishes.

While it may have gone through a lot of changes and had seen difficult years under different owners, it has survived through the decades and is now one of the fastest growing chains in the country. There are over 170 locations now open and it doesn’t look like Taco Bueno is going to slow down any time soon.