You are here: Fast Food Prices > History of Zaxby’s

It is true that in order to make it big, you are going to have to dream big, and this is exactly what two childhood friends did while playing a game of basketball in the early 90’s. As both Zach McLeroy and Tony Townley would gladly narrate to you, Zaxby’s was born out of their desperation for good tasting chicken wings along with the lack of restaurants or fast food chains which offered such product that would suit their taste buds. This is when the idea of establishing a chicken place in Statesboro, Georgia came about, giving birth to a franchise which has gained popularity and a loyal fan base in south eastern United States ever since.

What started out as a casual dining restaurant near the Georgia Southern University campus has since expanded to 600 locations, all spread out in 15 states, and expanding farther.

One of Zaxby’s main edge over the competition is how it strives to be different, and it does so in many ways that can be imagined. One visit to their website and you would know that its founders are doing their best to stand out from the rest by being more nonchalant yet still maintaining the obligatory air of professionalism which every establishment should have. Product names, for example, are offered a casual twist by coming up with monikers such as Zappetizers, Zalads, and Kidz Mealz. Sauces are called Nuclear and Insane to denote varying levels of spiciness. As such, the customer is not bored with such a gimmick that makes name recall relatively easier. In the end, it is that casual feeling which they instinctively apply to the overall experience, making it seem as though they have just had a meal in their very own home, with them naming the food items themselves. 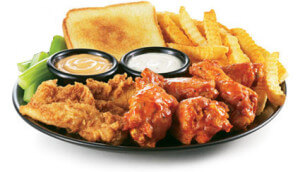 The success of a restaurant lies primarily on the food choices on offer on the menu, and Zaxby’s has found its niche when it comes to chicken fingers and chicken wings. What seems to be rather popular, though, would be the dipping sauces that come with these chicken dishes and which range from the mild Zax Sauce to the very hot and spicy Insane and Nuclear sauces. Chicken offerings aside, sandwiches (Cajun club, Zaxby’s club), salads (House, Caesar, Cobb), as well as various appetizers (fried mushrooms, onion rings, tater chips) are also available in different varieties. Meals usually come in various plate combinations, offering a complete dining experience with most of the food groups necessary to complete your lunch or dinner set.

Perhaps one aspect of dining at Zaxby’s which makes the experience memorable would be the interior design. Conceptualized by two childhood friends who initially did not have a clue on how to operate restaurants, most of the concepts involved in the establishment of Zaxby’s have been the brainchild of two wandering brains which seem to have made stuff up as they went along. The result has been effective so far, with each branch or franchise differing from another in terms of interior design, but staying true to the idea of incorporating a familiar theme that would remind customers of their own local experience. As such, seeing a Zaxby’s fast food branch decorated in accordance with the local university theme, for example, would not be uncommon at all, reflecting the communitarian perspective of its owners, which reminds you of home.

Both McLeroy and Townley have made it a point to lay good standards as far as franchising is concerned, streamlining basic processes to make it easier for the franchisee to become financially independent through a more efficient system as far as business operations are concerned. While the menu and the main product offerings are bound to remain the same, the look of the premises is totally up to the franchisee, in the condition that the identity of the brand is retained whilst earning profits that would keep the business up and running for more generations down the line.

With over 600 locations in several states, one could say that Zaxby’s has really come a long way since its humble beginnings as a little restaurant near the Georgia Southern University Campus. Kentucky, South Carolina, and North Carolina followed suit in opening their first Zaxby’s branches in the 90’s. However, it was in the 2000’s when expansion went to full throttle, with the decade witnessing the establishment of one branch after another in Alabama, Arkansas, Florida, Indiana, Louisiana, Mississippi, Tennessee, Texas, and Virginia. The latest addition to the family would be the new franchises in Missouri and Utah, both of which have just opened in the first few months of 2014, and there are just no signs of slowing down.