You are here: Fast Food Prices > Cinnabon’s Products Continue to Capture the Taste of the Nation

After a great year in 2013, Cinnabon, Inc. again made a splash in 2014 because of its record growth. Its plan of opening 315 locations for this year is achieved because of the support of their patrons. That can only mean one thing: their food really tastes great.

Cinnabon is a chain of baked goods kiosks and stores in the United States. Its stores are typically located in high pedestrian traffic such as airports and malls. It is known for its signature cinnamon roll.

About half of the domestic franchise and product growth of this fast food chain is attributed in the travel sector, such as airports and train stations, fuel, convenience and travel plazas.

One of the factors in this remarkable growth is the face lift given to the stores, and the addition of food items that exudes not only good taste, but fun and playful spirit.

A Glimpse at the History of Cinnabon 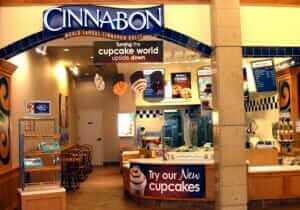 Cinnabon is actually an offshoot of the Seattle-based Restaurant Unlimited chain operated by Ray Lindstrom. Ray wanted to create the perfect cinnamon roll in the world. He hired Jerylyn Brusseau to create the signature recipe.

The first store of Cinnabon opened on December 4, 1985. It was located in Federal Way, Washington in Sea Tac Mall. Cinnabon’s first bakery started by serving only its Cinnabon Classic cinnamon roll.

The first franchise of the restaurant opened in Philadelphia on August 1986. This was the first store that is not inside a mall. It was located at the Detroit Metropolitan Wayne Country Airport.

In 1998, Cinnabon was bought by AFC Enterprises, Inc. for $65 million. Later, in 2004, AFC sold the company to FOCUS Brands, Inc. for $30.3 million. FOCUS is owned by Roark Capital Group, an Atlanta-based private equity firm.

Aside from its store locations across the country, Cinnabon also has a number of international locations some of which are in Poland, Pakistan and Cyprus. Its largest franchise outside of Canada and the United States is located in Stars Centre in Cairo, Egypt.

Aside from airports and malls, Cinnabon stores are also found in college campuses, military bases, amusement parks, and casinos.

Cinnabon serves oven-hot, aromatic and fresh cinnamon rolls. But that’s not all. This restaurant also serves other baked goods and specialty beverages. One of the popular food items on this restaurant menu list includes Minibon, a smaller version of the Cinnabon classic.

You will also love the Minibites or Cinnabites which are bite-sized versions of the Cinnabon Classic sold in packs of four.

There is also the Chocobon, a traditional cinnamon roll with chocolate sauce. This restaurant also serves CinnabonStix, which are sticks of baked Danish pastry dough covered in sugar and cinnamon, often dipped in frosting.

Other food items on their menu list include Churro, a baked churro with Makara cinnamon filling, and Center of the Roll, which is the center of a traditional cinnamon roll cut into bite-sized pieces and topped with cream cheese frosting.

There is also a special cinnamon treat called the CinnaPretzel, which is a soft pretzel made with cinnamon roll dough complete with a cinnamon roll at the bottom of the pretzel.

Recognition Given to Cinnabon

A good product like Cinnabon will certainly have its share of awards. One of the awards given to this restaurant is the New Product Award given by the Food Marketing Institute in its 2005 Retailer Choice Awards ceremonies held on May 12, 2005.

“The FMI show in Chicago is the largest food show of its kind in the country and is attended by major retailers and wholesalers from over 100 countries, and there are over 1000 large and small food company exhibitors,” he added.

“To be selected by our customers with so many other companies also showing new products is a tremendous honor. This prestigious award highlights our strategy to be an Intensely Different company producing Intensely Different food products,” enthused Mr. Freeze.

Innovation is the Key

Cinnabon’s innovation is its key to success. At the year’s end, about 75 per cent of Cinnabon’s domestic bakeries will display a redesigned image. This new image places new products on the center and beside classic fresh-made bakery sweets.

Storefronts now have teal accents, espresso wood finishes, subway tile and LED energy efficient lightings. There are also store tech upgrades such as the digital menu boards, which will be on display in 50 high traffic outlets