You are here: Fast Food Prices > All about Imo’s Pizza

St. Louis, Missouri has one great thing going for it and that’s the legacy of Imo’s Pizza.

Imo’s Pizza is a pizza restaurant with roots in greater St. Louis, Missouri. The chain is known for its version of St. Louis-style pizza which features homegrown Provel cheese as its primary topping. Provel cheese was created to meet the demand of Italian pizzerias in St. Louis. They needed a pizza cheese that breaks off without any fuss – no stray cheese strands – that cuts off in one clean delectable bite. Provel cheese proved to be a trifecta of cheddar, Swiss, and a special kind of provolone with a low gooey melting point. This was special ingredient alone made Imo’s Pizza a popular choice for pizza lovers. Today, Imo’s Pizza is the 35th biggest pizza chain in the US. 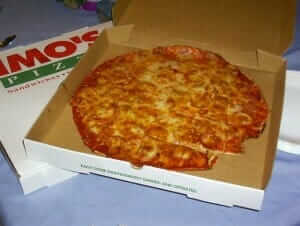 Ed and Margie would have date nights every Friday waiting for their late-night pizza order at just one of the many local Italian pizzerias on Hill Street in St. Louis. They eventually got tired of waiting, and they decided to start their own pizza place at Thurman and Shaw Avenues in St. Louis that actually delivered pizzas directly to their customer’s doorsteps. It was the start of something big as people loved the idea of pizza delivery.

Even though, the pizza store was starting to pick up, Ed kept his day job as a tile setter, but managed the pizza orders at night. The couple’s first kitchen even had a used oven, two fridges and a fishing tackle box as their cash vault. Nine months later, they opened another pizza outlet, and the rest is history. By the mid-80s, Imo’s Pizza had 30 stores and opened the business to franchisers.

Imo’s pizza has a great selection of toppings to go with that thin and crispy crust. But they do have a thick crust special if you prefer that. Let’s do a roll call on the toppings shall we? There’s cheese, pepperoni, hamburger, Canadian bacon, sausage, bacon chicken, onion, green pepper, mushroom, tomato, jalapeno, anchovy, black olive, pepperoncini. Veggie lovers will delight in having mushroom, onion, green pepper, black olive, tomato, cheese on their pizzas as well. For alternatives, you can also enjoy their delicious toasted ravioli with cheese and tomato. They also have something unique to offer on mornings, a breakfast pizza – a whopper of a meal with egg, sausage and bacon as toppings.

Customers have no problem ringing in their cards whether they’re there for dine-in, pick-up or opting for pizza delivery; Imo’s pizza accepts major credit cards such as Visa, Mastercard and American Express. Their pizza prices are affordable and not as pricey like fancier Italian pizzas, but their quality is far better than other fast-casual dining places that offer pizza and other pasta fares.

A Taste of St. Louis

Locals will always tell you to try a St. Louis-style pizza before you leave Missouri particularly Imo’s Pizza, it’s really has that great melt-in-your-mouth awesomeness that any good pizza fanatic will find difficult to say no to. And it comes in squares, not in the classic pizza wedges.

The family secret recipe also comes into play with Imo’s Pizza success; Grandma Imo made the pizza sauce in the first outlet on Hill Street. The tomato sauce is slow-cooked to perfection for over four hours before its spread on any pizza crust. This process reduces the acidic taste of the tomato paste, making it quite palatable by pizza standards. And in the early days in St. Louis, this was something new and novel as their other concepts, Provel cheese and pizza delivery. You might say Imo’s Pizza definitely revolutionized fast-food early on by whipping out pizzas for take-out. It made delivering fresh hot, right-off-the-oven pizzas an industry standard.

Imo’s Pizza also lives by their family’s golden mantra: “Don’t cheat anybody, make the pizza like you want it made, and stick with helping local people. We want people to know that the money stays in St. Louis.”

Today, Imo’s Pizza is still run by the same original family, but mostly by their children. They hire around 3,500 to 4,000 employees across the St. Louis area. They really want to give back to the community that helped them make Imo’s Pizza a success.

Imo’s pizza is very connected to its roots, its culture and community, people raised in the area have deeply-held beliefs about their pizza and that’s real customer loyalty. Louisians really swear how delicious Provel is, and they are quick to attest to its appetizing lure. Imo’s pizza is worth a try and worth a bite if you’re in town. It is that kind of comfort food meant to appease anyone’s pizza-loving heart.