Smashburger just announced the return of their Turkey Burger. The Turkey Burger at Smashburger consists of a turkey patty with American cheese, sliced tomatoes, lettuce, red onions, pickles, ketchup – and of course – the restaurant’s signature Smash Sauce. And for the hungry, you can order a Turkey Double Bacon Smash, which includes the same ingredients as the original – only with a second turkey patty and bacon slices. 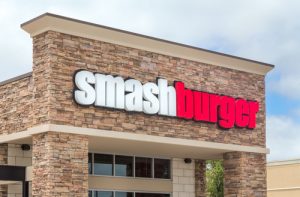 The Turkey Burger was first added to the Smashburger menu in 2017, in the wake of the beef-alternative frenzy. Since then, the fast food industry has been solely focused on meatless vegan burgers, so it’s nice to celebrate another protein source for once. Oh, and just in time for Turkey Day!

The Turkey Burger won’t be available at all Smashburger locations, and it is only on the menu for a limited time. In fact, Smashburger recently rolled out an entirely new menu they claim is “Bigger, Better, and Bolder.” In addition to the return of the Turkey Burger, Smashburger’s new menu items include the 100% Certified Angus Beef Burger and the Crispy Chicken Sandwich.

Smashburger is known for its selection of beef, chicken, black bean, and now turkey burgers, that are often paired with popular menu items like SmashFries, Cripsy Brussel Sprouts, Tator Tots, and Haystack Onions.

And if you don’t feel like getting in your car to drive to the nearest Smashburger, you’re in luck. The burger chain just announced via Twitter that they are now offering delivery on their website.