You are here: Fast Food Prices > The Philly Connection – Philly Cheesesteaks in Georgia!

Philly Connection has a very appropriate name – cheesesteaks are often accredited to Philadelphia, Pennsylvania but this small but feisty establishment is found in Georgia. With that in mind, connecting the locals with the pride and honor of Philadelphia’s signature cheesesteak is a golden idea.

Now everybody can get a taste of the iconic Philly Cheesesteak and they won’t have to drive out far from Atlanta. It connects people through the sole concept of an iconic dish and it does so with style, a comfortable and cozy ambiance, and the opportunity to branch out and franchise. 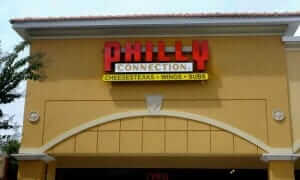 Right after the first branch opened the company began to expand and in three years several more opened in nearby locations. By 1988 the company started to franchise and now it is has grown into one of the most successful small-time businesses in the Southeast.

In 2009 the company became official partners with Save a Smile, a foundation dedicated in researching for treatment concerning child born defects.

Best Sellers on the Menu

The best seller on the Philly Connection menu is The Original, a 100% Philadelphia Cheesesteak through and through. It contains delicate slices of choice steak, grilled onions, as well as delicious white cheese.

The steak is sautéed in a very special, very secretive marinade that makes Philly Connection’s cheesesteak stand out from the rest, even from its hometown of Philadelphia where cheesesteaks are common. Philly Connection does like to advertise this secret marinade sauce often but it has never yet revealed what the sauce is made of, making it one of the top ten most secretive recipes in the business.

Then there’s the “My Cheesesteak” option which is also gaining a lot of popularity with the brand. It’s a unique spin on the traditional cheesesteak because this time the customer has a choice of whether they want white American cheese or if they want to use Provolone or even Pepper Jack instead.

It also allows for a wider range of toppings such as pizza sauce, jalapeno peppers, and even mushrooms and pepperoni. Anchovies, banana peppers, lettuce, and red onions are also on the list of additional toppings.

Last is the Chicken Cheesesteak, which substitutes the lean meat with chicken meat. This is perfect for people who don’t normally eat beef or are watching their diet more closely than others.

All of the main cheesesteaks come in three sizes: five inches, seven inches, and ten inches.

While Philly Connection focuses mostly on their cheesesteaks they do offer salads, subs, and desserts. A very popular item is the Beer Battered Onion Rings side dish. It’s not appropriate for younger kids but lots of adults will really get a kick with this one, which is probably why it is so famously paired with the aforementioned My Cheesesteak menu item.

The salad that Philly Connection offers allows customers to choose their own meat, their own cheese, and their own salad dressing. This type of customization is not really seen anywhere else except for Subway but here it is with much healthier food options. It also allows for customers to get the type of cheesesteak they want without having to break the original recipe, which is still on the menu.

Philly Connection is one of the few restaurants that serve a real Philly Cheesesteak; other restaurants tend to overdo their items with so many toppings that they have turned it into a sub sandwich littered with peppers, leafy green veggies, and others. In doing so, they have ruined the original concept.

A real Philly Cheesesteak uses very thin, waffle slices of top round or rib-eye choice of beef. Once the meat is brown it has to be scrambled and then topped with Provolone cheese. Once the cheese has melted the mixture is sandwiched by Italian Amoroso rolls.

That is the exact same style that Philly Connection utilizes which guarantees their cheesesteak is the real deal. The one thing that makes them stand out is their secret marinade sauce that makes the beef extra juicy and delicious.

In September 2014 the company celebrated their 30th anniversary and this was also when Philly Connection began partnering with food truck sellers to allow further food truck franchising opportunities. Now people wanting to franchise don’t have to do it with a big budget – they can be accomplished entrepreneurs with just a Philly Connection food truck, serving on the go.