You are here: Fast Food Prices > 13 Of The Best Fast Food Tacos

Deciding on a taco can be hard. Not only are there so many options when it comes to choosing a place to grab a taco, but then to choose just one (or a couple) off an entire menu? Next to impossible. This is why we’ve created a list of the best fast food tacos according to taco-lovers around the web.

Where does one even start ordering from Taco Bell’s virtually limitless menu? To narrow down your options, if you’re looking for something “outside of the norm” when it comes to a taco, consider the Doritos Locos Tacos.

The Doritos Locos shell is flavored with nacho cheese Doritos, then stuffed with seasoned ground beef, lettuce, shredded cheese, and sour cream. That’s surely a different taco we can wrap our hands around.

The taco bell crunchy taco is another classic and fan-favorite. It’s one of Taco Bell’s traditional tacos, filled with seasoned meat (you can swap beef for chicken and add in things like beans or even Fritos) and instead of being wrapped in a soft shell, is encased in a crunchy corn shell.

But beware – it’s nearly impossible to stick to one or two of these crunchy tacos. They’re as greasy as they are delicious, so we wouldn’t blame you for opting for a combo meal so you have the chance to indulge. The crunchy tacos come in several combos, including the Mexican Pizza Combo, the Quesadilla Combo, the Cheesy Gordita Crunch Combo, the Crunchwrap Supreme Combo – and of course, the combo the three crunchy taco combo! 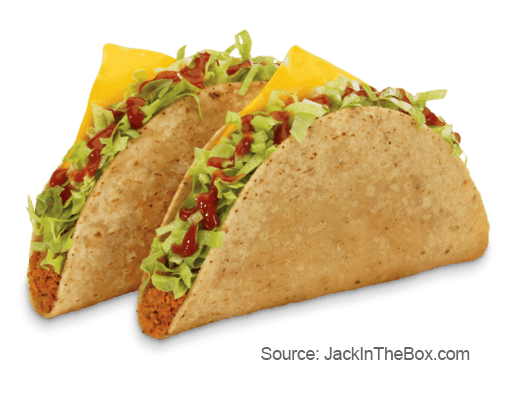 Although Jack-in-the-Box isn’t strictly a taco-only joint, their tacos rank high on the list of Best Fast Food Tacos. Choose from the classic Monster Taco, a large, seasoned beef-filled hard shell taco, or the Bacon Ranch Monster Taco to spice things up.

While Jack In The Box Tacos have been called nastier names than you’d find in the Mean Girls burn book, they are also highly acclaimed as one of the best fast food tacos in America. The fast food joint sells more than 500 million of these tacos each year – so they’re clearly doing something right.

The Del Taco is another favorite on Del Taco’s menu, but you’re still left with a few choices even after you choose their taco (hey, sometimes this is a good thing!). Enjoy the standard seasoned beef Del Taco with a crunchy shell or a soft shell. If seasoned beef isn’t your thing, you can always  choose a soft or crunchy Del Taco filled with ground turkey instead. Both come with shredded cheese and lettuce to round them out.

Oh, and we should probably address the elephant in the room, as well – the fries in the background. One of Del Taco’s signature combos is the #1 – two Del Tacos, crinkle-cut fries, and a beverage. While this seems like an unlikely pair, it’s one of the best sellers on the menu.

Bonus tip: You get two free Del Tacos when you download their app.

Taco Bell wins again with its soft taco as a fan favorite. As Taco Bell states, it’s the crunchy taco’s “much softer brother…It’s the kind of taco that will bring flowers to your mom when it’s invited over for dinner.” Sounds delightful (and delicious), huh?

The traditional soft taco comes with seasoned beef wrapped in a flour tortilla, but you can certainly enjoy it with other meats. Its classic toppings are shredded lettuce and cheddar cheese, but it’s fully customizable. This top seller can also be ordered in place of the crunchy taco combo meals that we mentioned above.

Del Taco doesn’t dub its soft taco the “much softer brother” like Taco Bell does, but it sure does promote it as one of the more popular menu items. In fact, Del Taco isn’t just for the average Joe – celebs like Chrissy Teigen openly share their loyalties to the Chicken Soft Taco. In a Tweet, Teigen stated “I will now share my favorite things… Chicken Soft Tacos with Del Scorcho at Del Taco.” If it’s good enough for Teigen, it’s good enough for us.

The Chicken Soft Taco is served with seasoned chicken breast, shredded lettuce, and tomatoes, wrapped in a soft flour tortilla and topped with a creamy chicken soft taco sauce.

Can’t decide whether you want a crunchy or soft-shelled taco? With the Taco Bell Double Decker Taco, you don’t have to choose. As a bonus, you also don’t have to worry about not getting full: the Double Decker is, of course, wrapped in two shells and includes filling beans alongside seasoned meat, shredded lettuce, and cheese.

The Double Decker at Taco Bell prompted the start of a shift in their menu. For a while, Taco Bell offered might expect from a Mexican fast food chain – tacos, burritos, and nachos. However, Taco Bell loves to experiment with new and dare we say it – kind of weird – menu items like the Double Decker Taco. But, it made our list of the best fast food tacos, so it must’ve achieved their goal.

Carne, who? Before we jump into why this guy made our best fast food tacos list, let’s cover the basics: carne asada means grilled streak – that is all. Del Taco’s Carne Asada Taco features carne asada wrapped in warm corn flour tortillas, and topped with roasted chile salsa, diced onions, fresh cilantro, and hand-sliced avocado. Talk about a juicy mouthful.

Side note: People love this taco so much that you can find Del Taco’s carne asada in a ton of their menu items, from Carne Asada Burritos to crinkle-cut fries topped with the seasoned meat, guac, tomatoes, and sauce.

Chipotle is known better for its burritos and bowls, but their tacos are a must-try if you’re a fan of the build-your-own fast food joint. If you’re looking for customization and variety in your taco, look no further than Chipotle’s soft tacos. Choose from steak, carnitas, chicken, barbacoa, chorizo, sofritas, or even tofu for your protein choice, then add toppings like salsa, rice, beans, fajita veggies, and sour cream. Wrap it all up in a soft shell, and you have one of the best taco options in your hand.

The Taco Bell Ground Beef Soft Taco is traditional – and fans love it that way. There’s no need to add anything to the seasoned beef, shredded cheese, and lettuce (unless you want to!) sandwiched between a soft tortilla shell.

But, if you’re like most people, a couple tacos are not enough to fill you up for long. Luckily, Taco Bell pairs these soft tacos with its other best sellers in combo meals to give you a variety. If you can’t decide what sounds good, we love the Quesadilla Combo with a soft taco, as well as the Cheesy Gordita Crunch Combo and the Quesarito Combo.

The Taco Bell Volcano Taco is what you need to order when you’re feeling rebellious and in need of “different.” And by different, we mean spicy.

While officially considered “discontinued,” you can still get a version of this spicy taco by ordering a Fiery Doritos Locos taco and adding creamy jalapeño sauce, nacho cheese sauce, queso sauce, and extra hot sauce. It’s that good that the community has figured out their own way to keep it on the menu.

If you want to spice up the Doritos Locos Tacos at Taco Bell even more, you can go for their Cool Ranch Doritos-flavored taco. Yes, the shell is actually made with Doritos Cool Ranch chips.

Let’s think about this for a second – the unveiling of the Taco Bell Cool Ranch Doritos Locos was inevitable, wasn’t it? As soon as consumers tasted the original Doritos Locos, their minds wondered: what’s next? Taco Bell never ceases to amaze us with their creativity and resourcefulness (some call it strangeness, but to each his own). The Cool Ranch taco is a prime example of how the oddest invention can turn into a best-selling menu item.

Chipotle rounds out our best fast food tacos list with the Cripsy Taco. Just like their soft taco, you get to build your own meal with the meat and toppings of your choice.

You get three of these cripsy tacos (corn shells) in each order, and according to Chipotle consumers, the fresh and seasoned ingredients are delicious and keep you full for longer than competitors’ tacos.

Hopefully, we’ve helped you along your journey of finding the best fast food taco for any occasion or craving. For more delicious Mexican food, check out the Top 10 Best Mexican Fast Food Joints.