You are here: Fast Food Prices > The Battle of the Ice Cream Giants – Culver’s vs Dairy Queen

The battle between Culver’s and Dairy Queen is just as epic a battle as McDonald’s vs Burger King or Chipotle vs Subway (although Subway isn’t technically a Mexican restaurant). Which one should you go to in order for you to satisfy your craving for cold soft desserts?

One thing to note is that we left out Baskin-Robbins in this comparison, but we will consider doing more ice cream restaurant comparisons in the future, which will definitely include Baskin-Robbins. 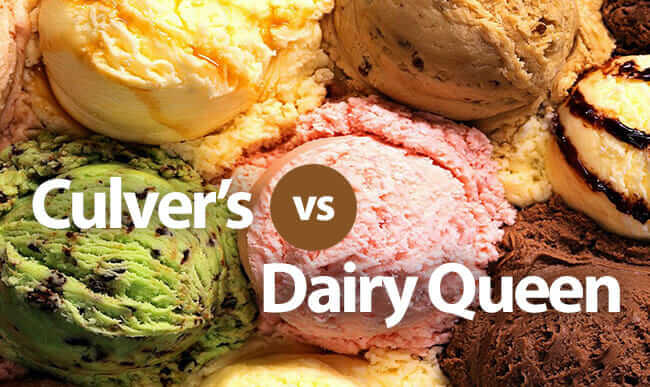 If you were to look at the vastness of their experience, then Dairy Queen wins by a bigger margin. It is the older of the two companies, with Dairy Queen being founded back in June 22, 1940 by John Fremont McCullough. Culver’s didn’t rise up to the challenge until July 18, 1984 and was founded by the Culver family, notably George Culver, his wife Ruth, son Craig (also a key member of the company’s management) and daughter-in-law Lea.

Take a look into the pages of history and you will notice that Dairy Queen started a lot of conventions that most fast food companies follow today. One such example is the concept of franchising. It was Dairy Queen that became one of the leading pioneers back in 1940 and 1941, expanding quickly from 10 stores (in 1941) to over 100 by 1947. To this date there are roughly over 5,700 Dairy Queen outlets all over the world. In comparison, Culver’s now has roughly over 475 outlets across the United States.

Every Culver’s branch is also relatively the same. They have the same fast food formula in every store, just like McDonald’s and KFC. One store is a general replica of the next. Dairy Queen, however, has five main types:

This is again another aspect where Dairy Queen tops the competition in this Culver’s vs Dairy Queen mash-up. Culver’s is known for offering slightly expensive food when compared to other fast food outlets and soft serving stores. Just take the basic chart of Culver’s menu:

Remember that these prices reflect an average. Prices might change depending on your location but these are the standard prices that most Culver’s outlets go by. Now in comparison, look at the chart of Dairy Queen’s menu:

Simply looking at the prices alone will tell you that Dairy Queen offers much more affordable meals. This comparison hasn’t even touched the specialties that both restaurants offer. Remember that the main attraction to Culver’s is their frozen custard while Dairy Queen specializes in ice creams and their grilled burgers.

Some may say this is unfair because the serving size of Dairy Queen’s sundae is not as large as that of Culver’s. However even if you were to double the serving size of DQ’s sundae it would still end up in Dairy Queen’s favor. While the number of carbohydrates and fat will not immediately double, calories will and even then they are still a good 170 calories less than that of the Caramel Cashew Sundae. If you were to add the cashew and the cherry topping to Culver’s serving then you will amount to well over 900 calories per serving. That is a lot of unhealthy business for one sundae.

So who wins in in the battle of Culver’s vs Dairy Queen? Without a doubt victory goes to Dairy Queen and for many good reasons. You have to accept the fact that Dairy Queen has been around for a much longer time and they have a good grasp of what sells and what doesn’t. They have already expanded all over the world and they wouldn’t be able to do so if they weren’t that good of a company. True, they aren’t the healthiest fast food and soft serving joint in the world but they are a lot healthier when compared to others.

Culver’s just happens to be a tad too unhealthy, expensive, and less popular, with only 470 or so outlets in the United States there are still a lot of areas that don’t even recognize the brand yet. There is a lot of potential with Culver’s but in this case of Culver’s vs Dairy Queen, the older brand still wins by a long shot.