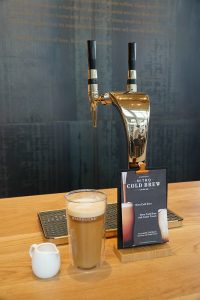 Trends in the coffee world continually evolve, and Starbucks works hard to keep up with trends that appeal to artisan-coffee lovers. Personally, I love that something new comes out every few months- so many combinations of flavors and interesting processes. Life should be exciting right? What was once a technique beloved by beer brewers has turned into one of coffee’s most popular trends, and now you can find Nitro coffee in most major cities, coffee shops, grocery stores, and even gas stations. Starbucks’ version, the Nitro Cold Brew is a nitrogen-infused coffee that weaves art and science into one very unique blend.

Nitro Coffee first mad a splash in coffee shops across the US a few years ago, and it was so popular that Starbucks took a chance on the beverage by introducing it at its Seattle Reserve Roastery in 2016 where it quickly grew to become the second favorite drink served, right behind the Cafe Latte. Since then, it’s spread to almost half of Starbucks’ US-based cafes, and it’s only growing from there.

The Nitro Cold Brew was originally made black and available in a tall and grande size. It’s served without ice so it contains more caffeine than their traditional cold brew coffee, and it has so much caffeine that a Venti size isn’t even an option. However, they do offer it in an 11-oz can which contains 235 mg of caffeine. This product is distributed by Pepsi Co and is available at Target and Amazon.

Since the initial release, Starbucks has developed a few more flavors and varieties with varying caffeine levels, each available in a tall or grande.

Starbucks’ Nitro Cold Brew is a new take on their signature Cold Brew, except that it’s infused with nitrogen for a smooth, creamy texture. After handcrafting the Cold Brew recipe, baristas pull the nitrogen tap allowing it to mix with the Cold Brew coffee and deliver an entirely new coffee experience. It’s cold right out of the tap and served unsweetened without ice. If it sounds fascinating, it is. But what does it taste like?

The texture of the Nitro Cold Brew is similar to a Guinness, which is also infused with nitrogen. It has a silky, smooth texture with the same taste and rush as a really strong coffee. The process of making the Nitro Cold Brew involves placing ground coffee and water into a big tub and letting it steep in cool water for about 20 hours. It then stays chilled in the Nitro Cold Brew keg (another similarity to Guinness), and then it’s poured into a glass. A cup of cold brew appeals to anyone who likes a cup of straight black coffee, but the nitrogen gas naturally enhances the taste, giving it a velvety chocolate texture and a full-bodied sip. Drinking it straight from the tap ensures that the foamy, cream top is not disturbed.

A cup of Nitro Cold Brew has only 5 calories, zero carbs, zero calories, and zero grams of sugar. Similar to a regular coffee or cold brew, it’s safe to drink on a Keto diet. It’s creamy like an iced latte, but dairy-free, so it also gets the green light for vegan and paleo diets as well.

The Nitro Cold Brew is such a great idea. You get the rush of strong coffee without the carbs and sugars that come with other coffees. It’s a full-bodied drink comparable to beer, but without the carbs or alcohol.  The price is fair, and you can enjoy a glass at any time of day – no need to wait until Happy Hour for a foamy tasty drink.

I would definitely recommend trying the Starbucks Nitro Cold Brew, And now, with so many different flavor options, you can try each of them without counting calories or carbs. All of the desirable flavors are strong, and the acidity is low. I kind of wish I had a nitrogen machine myself.

At Starbucks, a grande (large, 16 fl. oz.) Cold Brew Nitro will range in price from $3.25 to $3.95, depending on the market and location. This means it costs a bit more than Starbucks’ cold brew (which launched at $3.25 for a grande) and around a dollar more than a regular iced coffee. I’d say it’s worth it.

Have you tried the Nitro Cold Brew? Does it taste as similar to a Guinness as everyone says, or would you compare it to something else? Let us know in the comments below.