You are here: Fast Food Prices > Where to Get the Best Vegan Fast Food Items

The fast-food industry wasn’t built for vegans – that’s no shocker. The hamburger empires we all know and love were, instead, made for the masses – the everyday person without time to worry about what’s in their food. But the vegan? Not so much. However, there’s been a shift in the industry, as more and more people (and Instagram bios) boldly claim the vegan title. Whether you’re rolling through the nearest drive-through or sitting down for some 5-star cuisine, you can typically find at least one meatless, eggless, and dairy-free option to suit your diet. But don’t worry – we’ve narrowed down the search for you. Here’s a look at the best vegan fast food items. Enjoy! 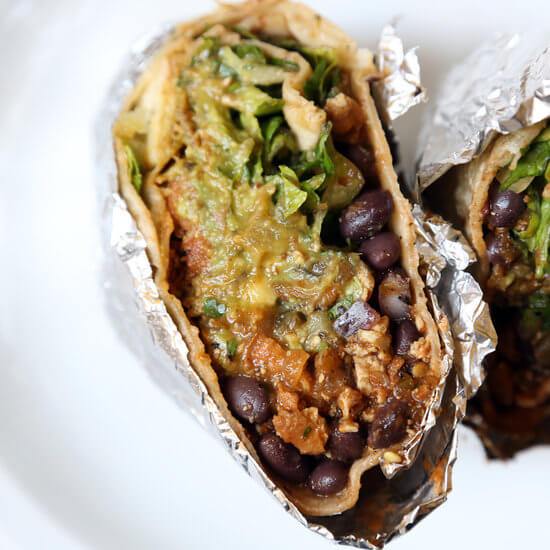 This Mexican grill offers sumptuous tacos but they also offer vegan-friendly menu items. These include their recently rolled out Sofritas Burritos present in selected areas such as the San Francisco Bay area and Washington, DC. Sofritas Burritos have shredded tofu and additional items such as beans, lettuce, and brown rice. Their veggie fajita burritos have a flavorful combination of grilled onions and peppers and an added plus to this item is that this is more affordable than those with meat!

Surprisingly enough, Dominos has one of the healthiest vegan options out there, the Thin Crust Pacific Veggie Pizza. The only catch? It’s only vegan when you order it without cheese (but we’re sure you’re used to that by now).

Yes, even this fast food place offers a healthy Veggie Burger. Kids love it, and adults benefit from it. These are meat-free burgers which can satisfy the burger cravings without sacrificing the flavor. Paired with one of their side salads, this can be a surprisingly healthy vegan meal.

You read that right. BK’s French Toast Sticks are vegan and absolutely delicious no matter what your dietary needs are. Plus, they’re a favorite of Jenna Dewan’s, so they must be good, right?

Although known for their heavy servings of meat-filled subs, they also have the Veggi Delite which can be paired with their 6 types of bread. You can even experiment with their different sauces. Subway consumers are actually on the move for them to include the meat substitute called Tofurkey which makes for an interesting addition to the Veggie Delite.

Taco Bell has a lot of vegan-friendly menu items which are filled with beans, You have the freedom to choose beans instead of meat, and anything with a usually meat filling can be replaced with this vegan item! remove cheese, sour cream, ranch sauce.

Carl’s Jr. has a delicous and unique option for vegans – their veggie burger. But, instead of a normal veggie patty, it’s fried zuccini (tastes amazing, take our word for it)! Plus, Carl’s Jr. has been backed up by PETA as a friendly place to offer fried vegan food since they do not fry them in the same vat of oil used for meat products.

Although the word “dairy” is mostly banned for vegans, Dairy Queen actually has dairy-free Arctic Rush options that can be enjoyed. In some of their locations, they have the “Star Kiss” vegan ice cream which can be a sweet treat for vegans.

In the world of fast food, Wendy’s is known for great service, flavor, and some vegan items to choose from. They serve a well-sized baked potato and the Deluxe Garden Salad which can be coupled with the Italian dressing sans the cheese.

People who aren’t even vegan rave about this slider, which can be topped with a number of White Castle’s sauces, like smokey BBQ, mustard, salsa, sweet chili, hot sauce, ketchup, and Nashville-inspired sauce.

Whenever you order from fast food places and you would like vegan items, make sure to specify this to the person you are ordering from. Follow these tips to ensure you have a satisfying fast food vegan meal:

If you’re an active vegan – or thinking of becoming one – check out these plant-based fast food options!