You are here: Fast Food Prices > Chipotle vs. Taco Bell – Who Wins?

Just like the previous fast food restaurant comparison articles we wrote such as McDonald’s vs. Burger King, Wendy’s vs. Arby’s, McDonald’s vs. Wendy’s, and Arby’s vs. Lion’s Choice, we are putting up the two Mexican-inspired restaurants head to head.

In this edition, we will be looking at pros and cons of the Chipotle and Taco Bell, including their prices, nutrition, taste, and food quality.

We realize that these two restaurants have drastic differences, however, we figured it would be fun to look at them side-by-side and see how they compare. Most people that eat at one of these restaurants do not eat at the other, so we’re not going to try to convince people to break their habits or restaurant of their choice. 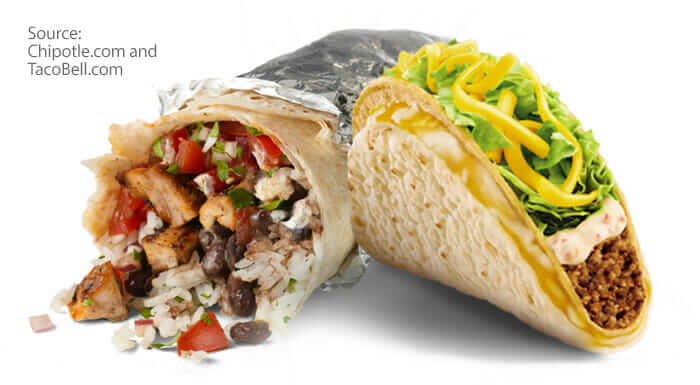 Chipotle, or officially known as Chipotle Mexican Grill, is a fancy fast food restaurant that allows and encourages customers to choose all the ingredients for their tacos, burritos, and bowls.

It is a similar model to sub sandwich restaurants like Subway and Quiznos where you go down the line and pick the ingredients you want.

Taco Bell on the other hand has a similar model to other fast food restaurants. It has a large menu with many items and most aren’t quite as customizable. One big advantage Taco Bell has over Chipotle is that most of their restaurants are open till 2 AM or later.

Chipotle prices are similar to other higher-end fast food restaurants. You aren’t going to find a dollar menu anywhere here. However, as the old saying goes, you get what you pay for.

Taco Bell prices are very much opposite of Chipotle. You can find plenty of items under $2.00 and they offer convenient taco packs that are even a better value. Taco Bell restaurants also have drive-thru’s so you can be in and out quickly.

It is very hard to say what the nutritional content of your meal will be at Chipotle since your meal is custom ordered. It highly varies based on the type of meat you choose, veggies, cheese, and sauces. As you could imagine, loading up your burrito with everything they have will increase the calories rapidly.

When it comes to Taco Bell, you can view the nutritional information for their entire menu. As you can see, their food is made fast and it’s made with price in mind, so the quality will suffer a bit. Some of their meals are deep fried so the calories and fats start adding up quickly.

Taco Bell does offer a limited “Fresco” menu, which includes healthier options with lower calories and fat content. If you are health-conscious and watching your calories closely, we’d recommend trying a Fresco item next time you’re at a Taco Bell.

There’s no doubt about it, if you’re mindful of the ingredients you’re putting in your food at Chipotle, it will end up being a healthier choice overall.

This is perhaps the one category where the winner is a clear choice. Chipotle sources their foods from local farms where the livestock is raised following their humane guidelines and the vegetables are mainly organic as well.

Taco Bell has many different food sources, and while they’ve worked hard to improve the quality of their suppliers, it still lacks the local farm quality that Chipotle has.

One of the most subjective categories of judging food, the taste of these two restaurants is barely comparable. Not because one is highly superior to the other, but because they offer a slightly different style of food.

Although they’re both heavily inspired by Mexican food, Taco Bell is more of a Tex-Mex food, while Chipotle aims to offer genuine Mexican foods.

The taste will depend on what style of food you like more. Chipotle tends to have more home-style Mexican taste, while Taco Bell takes a different approach to their foods. It tries to blend the traditional American and Mexican foods to create weird and delicious creations such as the Doritos Locos Tacos.

While it is always hard to decide which restaurant is better, in this comparison, we are going to give Chipotle just a slight edge due to being superior in nutrition and quality.

As we’ve mentioned above, Taco Bell prices are so much cheaper that in many cases, it is a better choice. Everyone has their favorite food and you should try both restaurants to decide which one you truly like more.

One tip: Don’t let others influence your decisions.

I’ve seen many people take radical positions on this subject, and it is simply a mistake to do so. There is no reason why you can’t like both restaurants. They offer foods that are different enough to crave at different times.

Our suggestion is to go to Chipotle during the day with your family, and then grab some Taco Bell late at night when watching a sporting event with your friends.