You are here: Fast Food Prices > Arby’s vs. Lion’s Choice?

Arby’s is a fast food restaurant that is available in almost every region of the country. And although Lion’s Choice is limited mainly to the St. Louis region (and spread sparingly across Midwest), we feel like it is a strong competition to Arby’s.

Regardless of which restaurant we think offers better food, we recommend anyone traveling through the St. Louis area to stop by a Lion’s Choice restaurant to try the locally beloved roast beef sandwiches. You will not be disappointed.

Arby’s is a fast food restaurant founded in 1964 in Youngstown, Ohio by Forrest and Leroy Raffel. Although they offer a large variety of food, they are primarily known for their roast beef sandwiches.

The reason Arby’s has gotten popular is because it offers something different. They’re not your average burgers and fries fast food chain. When it comes to roast beef sandwiches, they are pretty much the only player in the game nationally. There are some smaller roast beef sandwich chains in certain locations, and Lion’s Choice is one of those we’re comparing to Arby’s in this article.

The roast beef used in Arby’s sandwiches is sliced fresh daily which helps add that fresh taste. If you looked at a sandwich in the pictures, the roast beef looks more like deli meat because it is sliced in larger pieces, then folded into the sandwich.

Most people have never heard of Lion’s Choice. It is a restaurant established in Ballwin, MO in 1967 by Marv Gibbs and Clint Tobias. Even though there are only 23 locations, everyone that has tried their food has something positive to say about it.

Lion’s Choice roast beef sandwiches are very unique. They are very simple in design as they only have the bun, roast beef meat, and gooey and liquid cheddar cheese.

Let’s start with their roast beef meat. It is absolutely delicious and tender to chew. You won’t find any gristle or fat in this roast beef. One thing Lion’s Choice figured out is that roast beef is best when a little pink.

Unlike Arby’s all-brown roast beef, Lion’s Choice is cooked to perfection and not a second longer. This creates a very soft and tender meat that’s easy to chew and tastes like no other. 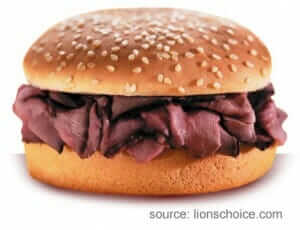 If you couldn’t tell from our praise of Lion’s Choice above, the winner is pretty clear. Lion’s Choice roast beef sandwich is better than Arby’s in every area except price. Lion’s Choice prices can be pretty high for a fast food restaurant, but it wouldn’t be fair to expect a higher quality and better tasting sandwich to be low in price.

Arby’s has found a recipe that works time and time again and its sandwich deserves recognition, as it is the only restaurant that relies mainly on its roast beef sandwich on a national scale.

We strongly feel that you should try both Arby’s and Lion’s Choice roast beef sandwiches to determine which one you like better.