Whether it’s mid-July or the dead of winter, ice cream is a staple on any fast food menu. But with every restaurant selling you on their latest Blizzard-look-alike, how do you decide which one is worth your money? We’re not here to tell you which is the best soft-serve ice cream because, well, that’s just boring and you can handle more than that. We’ve got it all – cones, shakes, sundaes, and whatever the heck a concrete is. We’ve judged our choices on flavor, texture, and toppings. And truth be told, this may be the toughest competition we’ve seen since we’ve started our Power Rankings series.

If you plan to make a meal out of it, we’ve included the best food pairings for each ice cream option. Pinkies up. 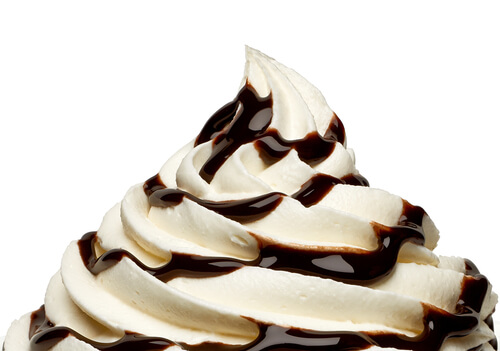 Culver’s ice cream flies way under the radar, but we’re here to give it the spotlight it truly deserves. From sundaes to Concrete Mixers, cones, dishes, shakes, malts, and floats, they’ve got quite the selection as far as best fast food ice cream goes.

Their frozen custard is “made throughout the day so it’s always rich and creamy.”

Culver’s is the King of Comfort Food, from chicken sandwiches to tenders and fries. Their ice cream sundae also fits the bill for food you’d want to eat after a broken heart or snuggle up with during a Netflix binge. The best part about Culver’s Sundaes? They are completely customizable, starting with one to three scoops of either chocolate or vanilla ice cream. Then, choose two toppings from their massive list, including Reese’s, Oreo, Snickers, M&M’s, Crunch, Heath, Butterfinger, and Andes. You’ve also got options like “Ooey Gooey” sauces, from Salted Caramel to Marshmallow Crème, Hot Fudge, and Butterscotch. The list goes on with fruit, nuts, and the essentials: cookie dough, brownie pieces, and whipped cream.

If you don’t want to customize it, they’ve got a Classics menu for you to choose from, which includes the Turtle Sundae, Caramel Caramel Cashew Sundae, Fudge Pecan Sundae, and the Banana Split.

Pair it with: Chicken Fingers. You decide which to eat first.

Of course Cold Stone made the list of the best fast-food ice cream. But fair warning: it’s best to be hungry before you step foot into Cold Stone. Their rich, filling custard may pop the top button of your pants off, but it’s worth it.

Good things stand the test of time, which is why we chose Cold Stone’s Peanut Butter Cup Perfection. When else is it appropriate to eat two Reese’s Cups, a giant spoonful of peanut butter, and chocolate fudge all in one sitting? Case closed.

Oh, and one more thing: Cold Stone is inevitably pricier than other fast food ice cream. But you don’t see DQ gently massaging your Blizzard and topping it with hand-chopped strawberries, do you? One of the very best things about Cold Stone is how generous they are with their portion sizes. We all have human-error to thank for this. Sometimes, when you ore a “Like It” (small), they scoop out too much ice cream and toppings onto the counter and have to put your serving in a “Love It” cup. No upcharge.

Pair it with: More ice cream?

There would be something fundamentally wrong with Shake Shack if they didn’t serve good ice cream. Their shakes are certainly delicious, but it’s their Concretes that we’ve got our eyes on. Made with frozen custard, a Shake Shack Concrete is a sundae on steroids. They change up their menu frequently, but some of the most popular Concretes are the Shack Attack, Downtown Butter Brown, Vice Crispy Treat, Brooklyn Pie Oh My, and the Fudge-eddaboutit. Not only are the names witty, but they taste like a dream. Each concrete is made with freshly-spun frozen custard that the restaurant claims is made with no artificial growth hormones. Shake Shack also promises that their ice cream is made with real sugar – not corn syrup.

While we’re impressed with each and every one of their concrete creations, we’ve got to give the prize to the Shack Attack, made with a base of chocolate custard and spun together with fudge, cookie dough, chocolate chunks, and sprinkles.

We’re still dumbfounded every time a DQ worker flips a blizzard upside-down and nothing falls out. Maybe it’s some sort of witchcraft, or maybe, they just have ice cream down to a science. Either way, the Oreo Blizzard is by far the best on the menu, though you can’t really go wrong with any ice cream and candy combo. It is virtually impossible for the combo to taste bad – we will take that truth to the grave.

Pair it with: Cheese Curds. They taste like they came straight from the county fair.

It’s hard to perfect mint chocolate chip ice cream, but Baskin Robbins has gotten closer than any other fast food ice cream. Most mint-flavored ice cream tastes like frozen mouthwash, but not this one. It has just the right about of mint that it’s enjoyable, not just tolerable. The flecks of semi-sweet chocolate add a much-needed balance to the custard, and there are plenty of chunks to go around. As an added bonus, Baskin Robbins Mint Chocolate Chip ice cream contains no artificial dyes, so you can be certain that beautiful hue of green is totally natural.

Pair it with: Dunkin Donuts Croissant. Most Baskin Robbins locations are connected to Dunkin.

If you’ve never heard of the Wendy’s Black and White Frosty, it’s probably because it doesn’t technically exist. It’s an unofficial menu item, combining two delicacies: the Chocolate Frosty and marshmallow fluff. The only downside is, you can’t ask for it in stores – you have to create this masterpiece at home. Simply buy a jar of marshmallow fluff at the store (any brand will do). Then, order a plain ole Chocolate Frosty from Wendy’s and take it home. Grab a glass and layer the two ingredients, starting with a scoop of the Frosty at the bottom, followed by a layer of marshmallow fluff.

We know it’s a bit of a hassle having to prepare this one yourself, but it’s worth all the extra legwork.

Pair it with: A side of fries to dip in your Frosty

Sonic may not be the first place you think of to grab the best fast food ice cream, but they’ve got an entire menu dedicated to shakes and sundaes that insiders refer to as “Frozen Zone.” They change up their ice cream menu quite often, but one treat we hope they never take away from us is the Oreo Peanut Butter Shake. It is something reminiscent of the Parent Trap scene where one Lindsay Lohan marvels at the other dipping an Oreo cookie into a jar of Jif peanut butter. You’ll feel just as awestruck when you taste this rich milkshake.

If you’re a peanut butter fan, you can’t go wrong with the Oreo Chocolate Shake or the Oreo Cheesecake Shake, all topped with whipped cream and a cherry.

Pair it with: Soft Pretzel Twist with Cheese

Back in the day, Steak ‘N Shake used to serve something called a “Side by Side.” One side of the shake was one flavor, and one side was another. Maybe they decided dividing the flavors wasn’t worth all the hassle, but we sure do miss it. In its place are regular milkshakes – half the fun, but just as delicious. Our vote goes to the Chocolate Banana Shake for its simplicity and classic flavor. While you may not think of banana as an ice cream flavor of choice, it’s surprisingly refreshing in this blended beverage and is complemented well by the rich chocolate.  No other fast food ice cream can pull off such a dreamy combo.

If you’re a fan of this one (you will be), you’ve got to try the Strawberry Banana and Ultimate Banana Milkshakes.

Pair it with: Frisco Melt

Chick-Fil-A is known for nailing the classics – the chicken sandwich, the nuggets, and the fries, and when it comes to their ice cream, their reputation is no different. Chick-Fil-A’s Ice Dream Cone is simply vanilla soft serve swirled into a sugar cone – no toppings necessary to enjoy this one. And while it may look just like any old vanilla cone, there’s something about Chick-Fil-A’s Ice Dream that tastes better. In fact, Ice Dream is the foundation of most of the desserts at Chick-Fil-A, serving as a base for their milkshakes and Frozen Lemonade.

Pair it with: Original Chicken Sandwich

The easiest way to get your hands on McDonald’s ice cream is to hand-make it yourself. Their McFlurries are decent, but when tracking down an operating ice cream machine is as hard as catching Zapdos, what’s the point?

We debated even putting it on the list because it is nearly impossible to find a location where the ice cream machine isn’t “broken.” And by broken, Will Doyle from Twitter means “I used to work in McDonald’s. The ice cream machine was never broke. It just takes three hours to clean, so we used to say it was broke so we didn’t have to serve you.” Following this viral tweet, current and past McDonald’s employees chimed in to confirm the validity of Will’s statement. So, there you have it. We’ve been lied to together.

Pair it with: French Fries

Burger King tries to dip its toes in literally every area of fast food (cough, cough tacos), but they end up being a Master of None. Exhibit A: their ice cream. The only available option is vanilla soft serve, which is a flop to begin with, but it only gets worse once you are handed a deformed, already melting white blob that sits upon a stale sugar cone. If you are going to order dessert from BK, go for an Oreo Shake or apple pie instead.

Pair it with: An ice cream cone from anywhere else