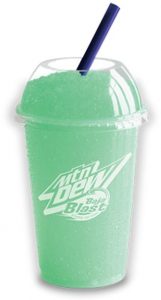 Freezes are frozen slushies made with various sodas available at Taco Bell. Through the years, there have been many flavors – the “Kickstart” Freezes were developed as breakfast-themed or late-night-themed drinks; the “Game Fuel” Freezes tie in with video game releases and promotions; international flavors are region-specific; and there is a long list of discontinued flavors. However, one that’s stood the test of fast-food time is the Taco Bell Baja Blast Freeze, a Mountain-Dew based slush that’s so delicious to sip on, you have to watch out for that delayed brain freeze.

Taco Bell released its Baja Blast in 2004 as a chemically-formulated drink designed to taste better with their food menu. In 2012, Taco Bell began offering a Baja Blast Freeze in select locations. It’s a flavor variant of the Baja Blast, a Mountain-Dew-based slushy soda similar to the franchise’s Frutista Freeze line which was released in 2008 (and later discontinued in 2013). The Baja Blast Freeze was so popular that it became part of the permanent menu in January of 2013, where it joined numerous other Freeze flavors. In 2019, Taco Bell released a limited time Baja Blast Birthday Freeze full of candy sprinkles. I can’t imagine how that paired with a taco!

Frozen slushy drinks seem to gain popularity by the year, but we consumers like choices and flavors, so it’s up to the fine people behind the fast-food and convenient-store scenes to keep us interested. Taco Bell’s Frutista Freeze’s were the inspiration behind the Mountain Dew Baja Blast Freeze, and it’s the only Mountain Dew Freeze available – exclusively offered at Taco Bell restaurants. The name was inspired by Baja, California, known for its beaches and fun, free lifestyle.

There’s only one Mountain Dew Baja Blast Freeze and you can find it exclusively at Taco Bell. But if Mountain Dew isn’t your jam, the franchise offers other flavors including Electric Blue Raspberry, Citrus Cherry, Maui Burst, Electric Apple, or Berry Burst. There are also seasonal, limited-time promotional flavors, but availability varies by location (stateside and internationally), so check with your local Taco Bell and see what surprises they have.

The Mountain Dew Baja Blast is a light blue-green colored, tropical-lime-flavored variation of the soft drink. Frozen and slushy, it pairs well with your favorite Taco Bell meal, Or even better, sip it poolside on a hot day.

The Baja Blast Freeze tastes like Mountain Dew with a limey flavor. It’s not tart or sour, so it’s easy to sip. But beware- this drink comes with a delayed brain freeze if you drink it too quickly. The consistency is a lot like a (virgin) frozen margarita- it’s light and cold, and the chunks of ice are generally small enough to fit through the straw. I love the light lime-blue color of this drink- it reminds me of beaches in Mexico, and since it was named after the Mexican state on the Baja California Peninsula, I’d say it’s appropriate.

Mountain Dew Baja Blast contains 4.50 milligrams of caffeine per fluid ounce, which isn’t much considering an 8-oz cup of coffee has over 90 milligrams of caffeine. It also contains 41 grams of carbs and 41 grams of sugar, and that’s pretty much average for a 12-oz can of soda. While it’s not off-the-charts bad for you, there’s not any nutritional value in this drink. The Baja Blast Freeze is more of a treat to quench your thirst and cool off on a hot day.

I enjoyed this Freeze enough to experience that delayed brain freeze- and it’s a doozy. But it’s probably the best Mountain Dew flavored drink available, with its tropical lime flavor infusion and frozen margarita texture. It’s like drinking a virgin margarita with your Tex Mex Crunch Wrap Supreme or your Grilled Steak Quesadilla. It’s a fun drinking experience that brings you some of that beach nostalgia without the sunburn or hangover- it’s less expensive too. Treat yourself to a little fun and enjoy it. It’s worth a taste.

If you’re a Mountain Dew fan, this is the perfect drink for you. It tastes just like the soft drink, with an extra touch of lime flavor. It’s not expensive, it’s fun to look at, and it even resembles a frozen margarita- what’s not to like? The nutritional value is low, but besides the sugar, it’s not terrible for you. Overall, it’s an enjoyable drink on a hot day. Even if you can’t drink it by a beach or a pool, it’ll bring a smile to your face in the office or on the go.

Taco Bell’s Baja Blast Freeze is priced at $1.99 for a medium, which is the same price as their previously-released Frutista Freezes. However, Taco Bell began offering Happy Hour specials in 2013. Between 2 PM and 5 PM daily, you can purchase medium drinks for $1 as well as Loaded Grillers, Freezes, Sparklers, or any medium drink.

Does the Taco Bell Mountain Dew Baja Blast Freeze live up to its hype or would you prefer a regular Mountain Dew soft drink?