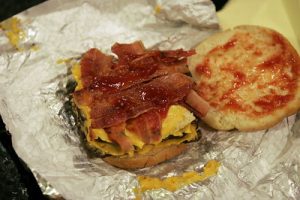 Wendy’s Baconator is one of those burgers you want to gorge on when you’re so hungry you could eat a pig. Or a cow because honestly, this burger is heavier on the meat patties and lighter on the bacon – just six small slices, which would equal 2 or 3 slices had I bought them at the store and cooked them myself. But I’m getting ahead of myself. The Wendy’s Baconator is packed with flavor and remains a customer favorite for over ten years.

Wendy’s customers asked for a more “craveable” burger, so in August of 2007, the fast-food franchise delivered just that, the epic Baconator – a double-bacon, double-patty cheeseburger that keeps carnivorous customers coming back for more.

Are there Many Variations?

The Baconator burger can be ordered in slight variations, but taste pretty much the same: the Baconator or the Son of a Baconator, a smaller version of the same thing. Wendy’s also offers a couple of other Baconator menu items, such as Baconator Fries and the Baconator Breakfast. Imagine starting the day with that! At least you would have the day to burn off the calories.

Let’s Dig Into the Meat of the Baconator

Wendy’s Baconator is made using two quarter-pound 100% beef patties, two slices of American Cheese, six pieces of crispy Applewood smoked bacon, ketchup, and mayo. If you love a thick, dense burger you can indulge and sink your teeth into, then this is perfect. It is quite a challenge to finish eating it – I couldn’t.

To begin with, the size is a bit misleading, because it looks like a small burger – smaller than what you might imagine a Baconator to be. I pictured a gigantic burger full of meat, and I didn’t realize when I ordered it that there isn’t even a hint of vegetables unless you count the ketchup, which I don’t.

When I opened the Baconator, I expected to find quite a bit of bacon. The advertisement says six strips, but I found them to be rather small. Three small strips are laid on top of one patty with a slice of American cheese, and three small strips are laid across the other patty with another slice of cheese. The bacon is hickory-smoked in flavor and pretty crispy, but for a burger named after bacon, I was a bit surprised that bacon wasn’t oozing out of the buns. I could taste the patties much more than the bacon. Where was all the bacon?!

The Baconator is advertised to have lightly toasted buns, but my buns were fresh and squishy. A toasted bun would have been a great idea to help hold the weight of it, but these fluffy buns were the lightest part of my dining experience. Both buns are smothered in ketchup and mayo and packed up to be a meat lover’s fast food dream.

Is the Baconator healthy? Definitely not. At 950 Calories, it’s comparable to the caloric intake of five Krispy Kream Original Glazed Doughnuts, seven Starbucks Mocha Frappuccinos, or almost two KFC family-sized mashed potatoes. It is also the same calories as 190 leaves of spinach, but somehow I don’t feel like these are measured the same.

Wendy’s Baconator has 1,920 mg of sodium which is significantly higher than the American Heart Association’s daily recommended sodium intake of 1,500 mg per day. Ingesting too many high-sodium foods can lead to high blood pressure, kidney stones, and constipation. You could counteract the effects of excess salt and high blood pressure by eating foods high in Potassium (3,500 – 4,700 mg per day), like those spinach leaves that we mentioned before or eight large tomatoes. The Baconator has neither of these, so be sure to prepare a salad for yourself that day.

Should I mention the 62 grams of fat? Let’s just say it would take 4.4 hours to walk it off.

If you love meat layered on top of more meat, heavy oils, and American cheese without a hint of crispy fresh veggies, then this is the burger for you. It comes out hot, hearty, and dripping with flavor. There are times when that’s exactly what you may crave, and in that case, this is a winner. If you’re looking to eat a filling burger with a bigger variety of tastes, textures, and veggies, this may not be the best choice.

The Baconator is a bit pricier than most comparable fast food burgers, and it doesn’t include any crisp, cool veggies to lighten the density. I couldn’t finish the burger or enjoy fries with the meal because it was all too much. My stomach was a bit rumbly for the next couple of days, and in the future, I would pass on eating the Baconator again.

Let’s Hear From You

We are curious to know if you can finish Wendy’s Baconator. If that’s not a challenge for you, what about finishing the combo meal, complete with fries and a drink? Let us know how you felt afterward, you carnivorous champion.