Low calorie fast food is becoming more and more popular as people are finally realizing they need to do something about their expanding waist lines. While nobody necessarily has more time to prepare healthy meals during their hectic as usual days, now healthier options are being made more available by everyone’s favorite fast food restaurants.

This isn’t just a list of salads either – lots of healthy fast food choices feature grilled chicken or other lean meat prominently. It might not be easy to find a good alternative to your favorite meal but once you do, you can eat great and lose weight.

While McDonald’s doesn’t really offer much variety on their salad menu, you can always bring something from home and add it to the mix without them knowing if you want to. They have the usual Caesar salad which isn’t anything too special and they don’t really make an effort to spice it up either. Their chicken salads come with either grilled or crispy chicken and this is where you can cut the calories of your McDonald’s meal in half. Grilled meat is immeasurably healthier than fried – keep that in mind when dining outside of McDonald’s as well and you can cut calories with ease. For about $5, you might get full. 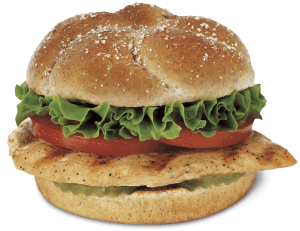 You might not think of salads when you think of Chick-fil-A, but then they don’t make a big deal of advertising the low calorie options on their menu. They have a perfectly average cole slaw which is admittedly awesome with fresh fried chicken. The carrot and raisin salad gets more mixed reviews however. While eating at Chick-fil-A, you must take advantage of the fact you’re eating one of the leanest meats on the market and go for grilled instead of fried whenever you can. The chicken soup and side salad combo is surprisingly good but costs about $8.

Not feeling like eating a salad? Try their yummy grilled chicken sandwich instead.

If you’ve never heard of Captain D’s before, that might be because it doesn’t quite have an international reach like some of the bigger fast food companies. Also unlike the majority of fast food restaurants, Captain D’s has lots of low calorie fast food options. This is a natural side effect of focusing on fish as you main dish. Many different kinds of fish are low in fat and calories. The way the meat is prepared can add a lot more calories to the meat than were present beforehand. This is where you need to be careful. However it’s cooked, a solid meal starts around $6.

Long John Silver’s has a bit more reach than Captain D’s so more people have heard of this other restaurant which specializes in fish; fried, broiled and baked. They do shrimp and other seafood too and the bounty of the sea is historically thinner and healthier than the land animals we eat. One particular item to avoid is the hush puppies – these are literally rounded balls of deep fried dough and nothing else. Frying the fish is bad enough but adding something like this can wreck a whole day’s worth of calorie counting. Meals start around $7 a piece.

While Chipotle might not offer food which is exactly healthier than other fast food options, the thing of it is they use flats, tortillas and other thin alternatives to bread. There are lots of calories in the typical bun and by flattening it out, cutting carbs out of almost any sandwich is a thing of ease. Burritos, tacos, tortas and bowls are all better alternatives to the traditional sandwich because they contain fewer carbohydrates even with all the other ingredients that make them great still present. This is a step in the right direction for low calorie fast food at least. You can eat for about $6.

You might not think it at first, but Dunkin’ Donuts is actually a pretty good choice if you’re looking for low calorie fast food. Granted, they do have some delectable donuts, all of which score understandably high on calorie counts. However, they also have selections like the egg white flatbread sandwich, as well as other biscuits, bagels and more. That first selection is especially healthy and makes a great small meal to get you going in the morning, really the perfect breakfast. Much of the food offered at Dunkin’ Donuts is healthier than the donuts they sell. Getting grub costs less than $4 here but if you’re looking for some coffee too you should expect to pay more.

Jack in the Box does a few things other fast food companies just don’t do. One of these is grilling food. This adds quite a lot of flavor to any sandwich without adding many calories. When you think about it, the extra carbon added by charring the edges on food is also a great source of extra fiber. That’s something grilling has which other food prep methods just can’t match. Jack in the Box also offers a good selection of turkey sandwiches and turkey is one of the leanest birds around. You could spend as little as $2 or as much as $20 here and there are deals for big meals too.

It might not sound like the place to get great grilled salads but Steak n’ Shake has a better offering of fresh, green food than most fast food restaurants. Typical grilled and fried chicken salads are on the menu but in addition, a Southwest and Apple Pecan variety are also offered. If you want to spoil yourself with a big, greasy and thick steak burger, being able to get some healthy food in the same place is pretty nice. The water in the lettuce will cut through the grease in the sandwich at least, something which will make each bite more enjoyable. Meals here start around $6 but they do have a 4 Meals Under $4 menu which is also great if you’re looking for cheap low calorie fast food options.