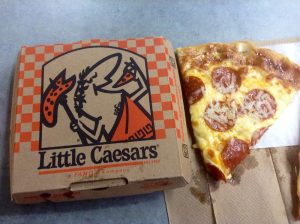 “Pizza! Pizza!” It’s probably the best-known fast-food pizza slogan ever – simple, to the point, and catchy – just like Little Caesar’s Pizza. The phrase refers to two pizzas being offered for the price of a single pizza from competitors.

And if there’s one thing Little Caesar’s does right, it’s offering fast, ready-made pizzas at a super low price.

Little Caesars was founded by Mike “Little Caesar” Ilitch and his wife Marian in 1959 in Garden City, Detroit, where this first location is still in business today. In the beginning, the couple served pizzas, hot dogs, shrimp, chicken, and fish. But soon, they decided to focus on pizza, and by 1962, they had sold their first franchise. By 1987, Little Caesars had locations in all 50 US states, and in 1989, they bought out the Mother Pizza chain in Canada and the UK, giving them a stronger foothold in those areas. You might remember seeing Little Caesars inside of K-Mart stores in the 1990s and early 2000s, and today, they are the fastest-growing pizza chain in the world, with more than 4,000 locations in the U.S. and 17 international locations.

Little Caesar’s offers over 30 types of pizzas. Their Classic pizzas like pepperoni, Hawaiian, veggie, and other main menu items are part of the “Hot-N-Ready” menu, created to make the more popular meals available immediately.

The franchise also offers several specialty or custom pizzas so customers can order exactly what they’re craving. In 1996, Little Caesars introduced a 3-foot-long rectangular pizza called Pizza by the Foot that has since been discontinued; however, its equivalent called “Pizza by the Meter” is a popular item in Saudi Arabia. The Deep!Deep! Dish Pizza is a Detroit-style pizza, and occasionally, the franchise releases limited-time offers like the Soft Pretzel Crust Pizza and the Bacon Wrapped Deep! Deep! Dish Pizza.

All this pizza talk had us internet spiraling a bit. And wondering… what kind of pizza would I be if I was a pizza? I mean, of course we did this Google spiral off the clock. Totally not while writing this and eating pizza. That would be too far – right?

Little Caesar’s has gone through many fun pizza ideas, but today, they’re mostly known for the “Hot-N-Ready” pizzas, Crazy Bread (garlic-parmesan breadsticks), Detroit-style DEEP! DEEP! Dish Pizza, and occasional limited-time offers. Interestingly, Little Caesar’s is the only national pizza chain that makes its dough fresh daily in each location. This is quite a feat considering the restaurants make a total of around three million pizzas a day.

The Hot-N-Ready pizzas area great in theory, but if they’ve been sitting around for any length of time, the freshness factor plummets. Remember the slices of pizzas under the warmer at Little Caesar’s inside of K-mart stores? They were made fresh that day but sat around too long? But you’re willing to eat it so you could fill your tummy and catch all of those K-Mart Blue Light Specials? It’s like that. I’d recommend picking up a Hot-N-Ready pizza only during the busy hours, so you know the turnover is fast, and the pizza is fresh. As for the toppings, I’ve never met a pizza topping I didn’t like. The pepperonis aren’t as crisp as Dominoes, but they still have a nice flavor. The veggies are fresh, the marinara sauce has a good tangy, spicy flavor, and the crust is doughy but tasty. If you aren’t a fan of doughy thick crust, choose a thin crust pizza. The cheese also had a good flavor, but it doesn’t taste the same once it’s re-heated. This is probably because Little Caesar’s uses a pre-shredded, low-water-content cheese to keep the cost low, but it’s still tasty and stringy when you take a bite.

However, the good news is, there’s a vegan option. That’s right- no meat, no cheese, no dairy, and no eggs. It takes just a bit of modification, but not much. The regular crust and the regular marinara sauce are vegan already, so when ordering your pizza, just ask for the Classic pizza without the cheese; then load up on veggies.

I’ve enjoyed Little Caesar’s pizza since I was a kid, and my parents always liked it because it was so inexpensive. It was always the pizza that parents would buy for birthday parties, and everyone was always happy. Now my kids enjoy it, and maybe now I like it for the same reason my parents did- it’s inexpensive, made fast, and can feed a lot of kids on a budget. It’s available across all US states, and you can even find locations internationally, so it’s readily available all over the globe. It tastes pretty good for a fast-food pizza, and there are lots of options to fulfill any taste preference.

I’ve also eaten the vegan version with friends of mine who are vegan. For extra taste, we brought our own avocado and Himalayan sea salt. (My vegan friends always seem to have an avocado with them!) Little Caesar’s pizza doesn’t particularly stand out in flavor, but it’s a solid choice for the price and its wide availability.

The nutritional facts vary depending on each pizza, but making it simple, here is the nutritional info on a Large Hot-N-Ready Classic Pepperoni Pizza.

Little Caesar’s is known for its $5 hot and ready pizzas, but this deal only applies to the cheese and pepperoni pies. Any other pizza will cost you a little more and will need some time for preparation. How is it possible to make a profit on such a cheap pizza? The chain has fine-tuned its ingredient list and taken a short-cut with its cheese. It’s pre-shredded and made with low water content, which allows it to be stored for much longer. Besides the $5 Hot-N-Ready pies, Little Caesars also offers a $6 “ExtraMostBestest” Pepperoni and occasional promotional deals, which you can find out more about on their website. Prices vary by location, but some deals include a 3-piece Stuffed Crazy Bread for $3.49 from 4-8 PM daily.

Are you a fan of Little Caesar’s pizzas? What are your favorite toppings? What has your experience been when ordering a Hot-N-Ready? Was it, in fact, hot and ready, or did it miss the mark? We want to hear your thoughts in the comments below.