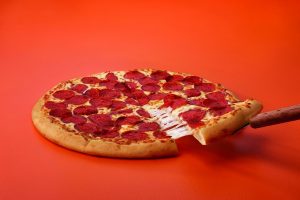 Little Caesars is most well known for its Crazy Bread and its $5 Hot N’ Ready pepperoni pizza. Both are made quickly and can satisfy a crowd in a snap – think backyard birthday parties or potlucks. They’re also perfect for a quick inexpensive pizza to accompany you while you Netflix and chill. Just when you thought Little Caesars couldn’t come up with a better option, they surprised us all in 2018 when they introduced the $6 ExtraMostbestest Pizza with the most pepperoni and cheese of any large round pepperoni pizza at the very best price. We’ll find out where the idea came from and how healthy this pizza is (or isn’t) in this Little Caesars ExtraMostBestest Review.

Little Caesars came up with the best value of any pepperoni pizza offered by any of the other major national pizza chains at only $6. It’s topped with even more of the chain’s famous fresh, never-frozen mozzarella and muenster cheese blend and over 50 pepperoni pieces per pizza. You can actually count on that.

Senior Vice President of Marketing at Little Caesars, Ed Gleich said, “People love their toppings, so we’re taking it up a notch to give customers the most pepperoni and cheese at the best price,” There was only one goal in mind- to launch a pizza that had the most cheese and the most pepperonis at the best price nationwide. The idea was that if customers could get this much value, why would they buy pizza anywhere else?

They’ve definitely accomplished their goal, and people really do love this value pizza.

When the ExtraMostBestest was first introduced, it was only available with cheese and pepperoni. Since then, the company has expanded its offerings to include even more cheese and more toppings. Now you can create your own ExtraMostBestest Pizza with the toppings of your choice. These options include pepperoni, bacon, beef, Italian sausage, ham, green peppers, onions, and mushrooms. Most stores also offer black olives, jalapeno peppers, banana peppers, and pineapple.

You can think of it as an upgrade to the Hot N Ready pizza because you can custom-order your pizza via the Little Caesars mobile app and, if you like, pick it up at stores that have Pizza Portals.

Pizza prices may vary depending on toppings and location, but the pepperoni option begins at only $6. What a deal.

While the number of pepperonis and the value has increased, this pizza doesn’t taste much different than Little Caesars’ classic pepperoni pizza. It felt slightly thicker and heavier which was likely due to the additional cheese, but I’m not complaining because other chains often lack in this area, and I love a gooey, cheesy pizza. The only issue is that if it sits around too long, it gets a bit soggy. If you can’t eat it right after ordering it, or you have leftovers, I’d recommend re-heating the pizza in a pan or skillet to give a little firmness to the crust.

While the Little Caesar’s ExtraMostBestest pizza is considered the best value for the best price, it can’t claim the title of being the healthiest. Most menu items are high in calories, saturated fat, and sodium. So if you’re going to indulge, do so in moderation or stick to plain pizza without high-calorie toppings. Little Caesars does offer healthier veggie toppings like green peppers, onions, mushrooms, black olives, jalapeno peppers, and banana peppers, which would be a better option than pepperonis. If you have dietary restrictions, you might also consider ordering a thin crust pizza instead of this thick crust with mounds of cheese. You can enjoy a few slices now and then, but moderation is key.

Little Caesars gets 5 points for value. No other pizza chain has been able to create a similar pizza with as many toppings at such a low price. The dough is made fresh in each store every day, and the cheese is advertised as “fresh, never frozen.” While you might want to consider the nutrition factors, this is a tasty fast-food pizza that can be ordered and eaten in a jiff. For what it is, it’s the best value out there, and I think it’s definitely worth it.

This is a great go-to pizza for a fast Friday night dinner or to satisfy a bunch of kids. Yes, I have experience there. It’s not the healthiest pizza but eaten in moderation, I don’t have a problem with it. I love the mound of cheese and I especially enjoy the extra pepperonis. As a southern girl, I like to pour Tabasco sauce on my pizza, and it’s the perfect comfort food.

The nutrition will vary slightly depending on which toppings you choose. The information below is based on a pepperoni pizza since it’s the most popular option.

You can create Your own ExtraMostBestest pizza beginning at just $6 for a large. Remember the Hot N Ready pepperoni pizza is only $5, so for just $1 more, you get 80% more pepperonis and way more cheese. You’ll get pepperoni with almost every bite. You can also customize your ExtraMostBestest with other toppings. The price may vary slightly, but not much. It’s still an incredible value for a large pizza.

Are you hungry after reading this Little Caesars ExtraMostBestest Review? Take advantage of their new delivery service and let us know what you think of the ExtraMostBestest in the comments below.