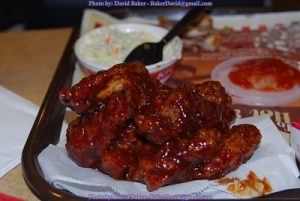 It’s funny to think about how wings were created by accident in 1964 and now they’re a huge part of our fast-food culture. What was once the part of the chicken butchers threw away has grown into the main meal feature at social gatherings, games nights, and happy hours. In 2019, the National Chicken Council projected that Americans would eat more than 1.3 billion chicken wings during the Super Bowl- that’s a lot of wings! So if there’s ever a time to be in the wing game, it’s now.

We love wings so much that fast-food restaurants all over the country are trying to get a piece of the sales pie, and it would seem that it would be a natural step forward for a fast-food chicken restaurant. KFC has introduced wings a couple of times, but finally in the fall of 2019, just before football season, the franchise announced that its Chicken Wings would be part of the permanent menu. KFC even used its new menu item to promote its partnership with Grubhub for online ordering and delivery, which applied to over 2,600 locations.

KFC uses real chicken breast-not chicken wings- which means “technically” these aren’t really wings at all. They’re more like chicken nuggets with buffalo sauce. While that might be a letdown to big wing fans who love bone-in wings as I do, the good news is that the chicken is nicely sized chunks of juicy quality meat.

The Buffalo sauce is tangy and slightly spicy, with hints of cayenne pepper and spices. The breading is crispy and the sauce is messy, but since you can eat these with a fork, there’s no need for hoarding all of the napkins. The BBQ wings are sweet and sticky, but not as crispy. The smoky flavors in the BBQ sauce mix well with the sweet honey and the salty breading, so these wings have a really tasty flavor to them.

The Nashville Hot wings are spicy and delicious- but of course, because it’s the same sauce KFC uses on their Nashville Hot Chicken, that’s been a big hit among KFC fans and Nashville Hot Chicken fans alike. They’re flavorful and have a nice kick, which is what you want from a hot wing. The Original (no sauce) wings are just plain, simple boneless chicken wings. There’s plenty of meat, and the breading is well-seasoned, salty, and crunchy since there’s no sauce to contribute to sogginess.

The biggest complaint I have about these boneless wings is that the meat has a bit too much fat on it. I’d prefer less fat and more consistency in the crispiness of the wings regardless of sauce.

Deep-fried in oils, wings aren’t usually the healthiest options at fast-food restaurants. Eating three wings from KFC provides the same amount of calories and sodium and more fat than one chicken breast. The classic (no sauce) wings have fewer calories than the others, but what’s the fun in that? While wings aren’t the most unhealthy menu items (we’re looking at you Chicken Pot Pie and Famous Bowl ), they aren’t the healthiest either.

If you’re trying out all of the wings at every fast food restaurant, you’ll want to try these too. They aren’t the best wings out there, but they have their pros and cons. I’d recommend the Nashville Hot wings because the taste is more unique than any other flavors at KFC or other restaurants. The other flavors are just ok- not too special.

I’ve enjoyed tasting almost every item on KFC’s menu, and while the wings are average, I’d probably not order them again. They are big and crunchy boneless wings, but I prefer bone-in and lots of flavor variations. The price is fair and the nutrition is what you’d expect from a wing. But I’d prefer to order my wings elsewhere and let KFC do what they’re best at- making delicious crispy chicken breasts with savory homestyle sides.

The wings start at $3.79 for a 5-piece, going all the way up to 48 wings for $36.99. These are fair prices for boneless wings, as some other restaurants are almost double (unless there’s a special deal or happy hour).

Have you tried KFC’s Wings? How would you compare the taste and texture to one of your other go-to hot wings restaurants? Let us know your thoughts in the comments below.