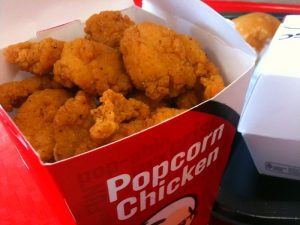 Popcorn chicken is nuggets of real chicken breast meat. While traditional nuggets are small round pieces of chicken deep-fried in a crispy batter, popcorn chicken is even smaller, resembling pieces of popcorn that you can “pop” in your mouth. While it’s advertised this way, you may notice that most of KFC’s popcorn chicken are not shaped like balls, per se, but they are still small enough to eat in one bite. Perhaps this is why they’ve rebranded their popcorn chicken under the name “KFC Popcorn Chicken Nuggets.”

Popcorn chicken is an American dish eaten for centuries because it was easy to prepare and pack into lunchboxes. It’s believed to have originated in the southern states during the time that slaves had to use every piece of chicken- including small bits-so tiny pieces of chicken were often fried together, and thus “chicken bites” were born. We’ve continued preparing this dish in modern times, but these days, it’s often about convenience. It’s easy to pop a small piece of chicken in your mouth while at a party or gathering or on the go. Naturally, KFC – a southern fried chicken fast-food restaurant – featured Popcorn Chicken on their menu in the early 1990s,  and it’s become so popular that they now offer popcorn chicken by the bucket. Every once in a while, they’ll even offer special deals, like Popcorn Chicken Buckets for 2, or the 80 Piece – Popcorn Chicken Nugget bucket. You’ll want to watch their website for promos.

KFC offers two types of Popcorn Chicken Nuggets. First, there are the traditional deep-fried nuggets, which are excellent for kids or anyone with a sensitivity to spice. Then there are the Spicy Popcorn Chicken Nuggets that are coated in a sweet, spicy rub. Both can be dipped in KFC’s Finger-Lickin’ Good Sauce, and both are excellent choices for sharing with groups or binge-watching Netflix on the weekend. Yes, I’ve done both.

KFC Popcorn Chicken Nuggets are made extra crispy with 100% white meat. While the hype is often centered around KFC’s chicken promotions and how many nuggets you can get in a bucket, the important question is, how do they actually taste?

Lucky for us KFC-lovers, the Popcorn Chicken Nuggets are just as enjoyable to eat as any of the other chicken offered by the fast-food giant. The chicken is pure white meat, and the breading is made using 11 different herbs and spices. Each piece of chicken is dipped into a fryer filled with canola oil and hydrogenated soybean oil for taste and crispiness, and I’ve yet to eat a KFC chicken that was anything less than crispy. The chicken is moist and tender, and each bite is tastier than the one before. You might eat the whole serving before you know it. KFC offers several sauces for dipping, including Finger-Lickin’ Good Sauce, Honey BBQ Sauce, Honey Mustard, Creamy Buffalo, Sweet N’ Tangy, and Buttermilk Ranch.

Chicken is usually a good source of lean protein, except when it’s deep-fried in high-calorie, high-fat batter, so as delicious as the nuggets are, they’re not healthy at all. To begin with, a large serving of popcorn nuggets contains over 600 calories. This is mostly due to the way the popcorn chicken nuggets are prepared and fried. Besides that, the chicken is also full of saturated fat, cholesterol, and sodium. One good news piece is that in 2017, KFC ended the use of medically important antibiotics in its entire U.S. chicken supply. This was important because the overuse of antibiotics in the chicken we were consuming caused serious problems in the effectiveness of these life-saving drugs for other animals and us. For that, we give this chicken 2 points for healthiness.

While the nuggets may not make it on your list of healthy foods, it does serve a purpose. It’s a quick meal that can feed a lot of people at a low price. It can be taken to potlucks, game days, parties, or gatherings, and it’s a quick way to feed a family if you’re on the go, in a hurry, or you feel like binging on crispy fried chicken. Depending on your needs, the KFC Popcorn Chicken Nuggets might be just the thing you’re looking for, and it won’t cost you but a few dollars.

I think this meal is great if consumed on a limited basis- maybe once a month or less. It’s not something I would feed to my family very often, and I’d definitely recommend pairing it with something more nutritious than KFC’s other high-fat, high-calorie side items. Drink lots of water and try not to eat all of the nuggets yourself- I know it can be tempting. Like all things, try to be balanced, and enjoy your crispy-fried foods in moderation.

The chain occasionally offers up their $10 Popcorn Chicken Bucket with over 70 pieces or other combo meals that feature popcorn chicken as well as other popular menu items.

Did you eat the KFC Popcorn Chicken Nuggets before 2015, when they were just “Popcorn Chicken”? Do you notice a difference in taste after their re-branding? What’s your take on the new nuggets? We’d love to hear your thoughts in the comments below.