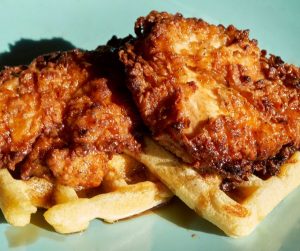 At first glance, I thought waffles and chicken were a strange combination – one is a sweet breakfast and the other is a savory lunch or dinner. But the beauty in this combination is just that – the sweet and savory flavors compliment each other in a delicious twist. KFC rolled out a limited edition version of Chicken and Waffles in 2018, but it was only available in three locations in North and South Carolina. Other restaurants have experimented with a similar meal box including Popeyes and Roscoe’s in California. But it became so popular that KFC brought Chicken and Waffles back to their menu in 2019 (for a limited time), rolling it out across the nation – and aren’t we all glad they did?

While chicken and waffles may seem a bit untraditional, it’s rooted in southern tradition. Food writer Adrian Miller wrote in his book Soul Food: The Surprising Story of an American Cuisine that German settlers ate chicken and waffles smothered in gravy as a Sunday dinner dish in the nineteenth century. By the early 1800s, a “Virginia Breakfast” gained popularity, which featured a combination of fried or baked meats with any sort of hot quick bread. This became the gold standard of plantation hospitality. Fast forward to 2018; KFC adopted this dish which was the perfect addition to their menu – customers love its unique twist on a classic meal.

Kentucky Fried Chicken offers dishes rooted in southern tradition with their extra crispy chicken, home-style sides, and buttermilk biscuits. The fast-food chain wanted to create a new spin on a southern dish while maintaining what makes chicken and waffles such a classic combo. After testing 15 different waffle variations, KFC chose the Liège-style waffle, which is sweeter and doughier than American style waffles, pairing seamlessly with KFC’s crispy fried chicken.

Types of KFC Chicken and Waffles

KFC offers three versions of this meal. The available options are chicken tenders, fried chicken, and a chicken sandwich with Belgian Liège-style waffle buns. They each come with a side of Mrs. Butterworth’s syrup. You’ll notice that the fried chicken and chicken tenders are no different from the other chicken menu items, but the waffles are sweeter than you might expect. You can even choose the type of chicken you want – drumsticks, thighs, breast, hot honey fried chicken, or a combination. The waffle sandwich is the most fun to eat- it makes you feel like a kid with a crazy concocted meal that your parents would have probably never allowed. It’s good to be young again.

When I’m looking for a savory meal, I tend to choose a meaty dish and a salty side, but this sweet and savory Chicken and Waffles combination is a welcomed flavor variation. We have to mix it up sometimes, right? Now that this option is back on the KFC menu to stay, let’s see if it’s worth the hype.

KFC chicken itself is delicious. The batter is crispy, crunchy, and flavorful, and it helps to lock in the juiciness of the chicken. You can choose the traditional fried chicken, or Hot honey fried chicken, which is a new spicy-sweet flavor. The Liège-style waffles are thick dense squares, with sweet doughy texture, with plenty of syrup and butter baked in. Just in case you want extra sweetness, each meal comes with a side of Mrs. Buttersworth syrup or honey (or both!). While the chicken and waffles baskets are tasty, the sandwich is the most unique – unlike anything else on the menu. Salty, filling, sweet, and savory all on one plate.

There are 1100 calories in a Chicken and Waffles Sandwich with syrup. The syrup is optional, but it also increases the calories and sugar content. And really, who would want to skip the extra sweetness? If you’re gonna do it, go all the way. The sandwich’s carbohydrate and caloric content are high, but it also has a fair amount of protein. As far as fried chicken nutrition goes, I’d consider it to land somewhere in the middle – between healthy and not. It also contains the following allergens:

This is such a fun change of pace, and because it only visits the KFC menu every once in a while for a limited time, it’s one of those meals you have to splurge on while you can. It’s not something you’d want to eat all the time, but you’ll enjoy the experience. The price is fair, the flavors are delicious, and you can find a KFC just about anywhere in the US.

A chicken and waffles basket meal will cost $5.49, while the sandwich costs $5.99. Considering the size and the contents, this is a great deal. It’s pretty consistent with the prices of KFC’s other items. For comparison, a 1-Piece Basket with chicken breast, coleslaw, and a biscuit is $5.49, and a Doublicious Sandwich Combo is $5.99.

To Waffle or Not to Waffle?

What do you think? Is a waffle sandwich a little too random? Or are you going to rush out and try one? We’re curious to know what you think of the KFC Chicken and Waffles, so let us know in the comments below.