Let us start off by saying that Dutch Bros is completely underrated. It’s a coffee shop based out of Grants Pass, Oregon, with character, influence, and one massive menu. From your classic coffees to more eccentric beverages, Dutch Bros has a truly one-of-a-kind menu. But as much as we love it, you know we’re not here to talk about Dutch Bros regular menu – we’re here on a more secretive mission. Today, we’ll unveil to you the latest Dutch Bro Secret Menu, full of caffeinated creations you’d never be able to order from its competitors.

There is a whole community that backs the Dutch Bros Secret Menu. For something that is supposed to be a secret, it’s quite well-known, so you shouldn’t have any issues getting your hands on one of these drinks. When ordering, feel free to use the title of the drink as it is, and your barista will likely know what you’re talking about. If they don’t, just pull up this guide to explain to the staff person which ingredients are in the drink.

Most Secret Menu drinks at Dutch Bros Coffee are available hot, iced, or blended, but there are some exceptions. For example, if you order a Rebel Energy Drink, it only comes iced or blended. No one in their right mind would want to drink a Blue Raspberry-flavored energy drink at 180 degrees, anyway. Drink sizes at Dutch Bros include 16 ounces, 24 ounces, and 32 ounces.

Like we said, Dutch Bros does things their own way, so some of their terminology may be confusing if you don’t frequent the coffee shop. Before we jump into the Secret Menu options, let’s take a look at a few key terms you’ll need to know to understand the menu. 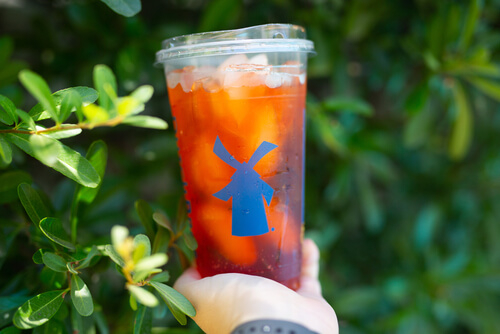 Americano – This beverage is comprised of an espresso shot(s) and water. Typically, a small drink contains one shot, a medium contains two, and a large contains three or four.

Breve – A breve is a variation of a latte. Rather than blending espresso with steamed milk, this beverage contains steamed half and half and espresso.

Freeze – A Freeze is a blended drink that contains coffee. It’s like Dutch Bros version of a Starbucks Frappuccino or a Dunkin’ Frozen Coffee.

Frost – A Frost at Dutch Bros has the consistency of a milkshake. It’s thick, creamy, and caffeine-free coming in flavors like Almond Bar, Amaretto, Banana Bread, and Birthday Cake.

Rebel – A lot of people wonder, what is a rebel at Dutch Bros? This chilled beverage is Dutch Bro’s own energy drink, which is stirred with other flavors to create fun and unique-tasting drinks. You can order a rebel iced or blended.

They also serve chai, cold brew, lattes, hot cocoa, lemonade, smoothies, soda, and tea – but you already know what those are. Now that you’re in on the secret (and not-so-secret) language of the underground Dutch Bros Secret Menu, let’s take a look at the different drinks customers can order. 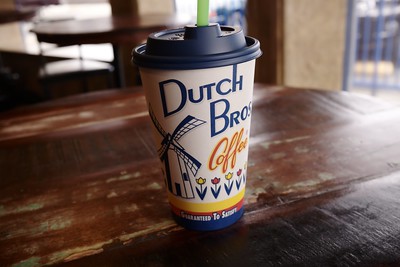 The holidays may be long gone, but this Chai Nog will fill you with all the warm-and-fuzzy feelings you get around Christmastime. Combining two classic favorites, this eggnog chai tea latte is a creamy beverage with hints of spice. It can be ordered hot, cold, or as a Freeze and is delicious when topped off with a bit of caramel sauce.

Thinking of making this drink the perfect triple threat? Add a shot or two of espresso to make it a Dirty Chai Nog.

There’s something about labeling something with the word “unicorn” that attracts people like a moth to a flame. This secret menu creation won’t turn you into a unicorn or anything weird like that, but it will make you feel all giddy inside and that’s really all you can expect out of a $7 beverage. Just order yourself a Rebel energy drink with strawberry and almond syrup and white chocolate sauce.

It takes a special kind of person to want to slurp down an entire 20 oz. drink that tastes like liquid cotton candy, but if that’s you – more power to you. This frozen beverage mimics the sugary treat you used to order (or maybe still) at the fair by blending white chocolate and blue raspberry flavors. And just like the real thing – it’s extremely sweet, so prepare your taste buds.

The Ocean Water Rebel is one of the most popular drinks on the secret menu. Blue Raspberry, coconut, and lime flavors are spun together with Rebel energy drink to create the perfect refreshment for any season. You can order this as an iced beverage or a Frost. (And yes, it’s gorgeous blue hue will make you want to book a vacation to the Caribbean, pronto.)

The Cure for what? A hangover. A restless night. A breakup. Whatever you need, really. This hand-crafted drink is a perfect blend of chocolate milk and cinnamon, spiked with a shot of espresso. It’s comforting, creamy, and caffeinated – just what you need to tackle a long day ahead of you. You can order it iced, blended, or hot (just ask for hot cocoa instead of chocolate milk).

We’d like to eat a Caramel Cinnamon Roll, but drinking one sounds nice, too. Customers who want to drown out the taste of coffee should try this perfect caramel concoction, made up of a blend of cinnamon, white chocolate, and caramel flavors. There are no limits with this one – you can order it as a Frost, Mocha, Latte, Breve, Freeze, Chai, or Hot Cocoa.

Customers also call this one Bob, for short, and you better believe it’s the most well-known secret menu drink among Dutch Bros customers and staff. From its legendary namesake to its delectable flavor, this is one secret menu item you’d be crazy not to try. The Bob Marley is a blend of Chocolate Mocha, Banana, and Coconut, and you can try it in any drink from – from hot to iced, blended, chai, or breve. And if you want to spice it up a bit, substitute the chocolate mocha for dark chocolate flavor.

Spoiler alert: you may see this drink on the regular menu at your local Dutch Bros. It became so popular that it has made its way off the underground menu at many locations.

If you want something that’s opposite of a Cotton Candy Frost, the Molten Lava Mocha might just be for you. It combines two mature flavors – chocolate and cinnamon into a beautifully rich, bold combination. As always, you can order this beverage iced, hot, or frozen. You can’t lose either way!

French Toast is a famous drink at Dutch Bros, but the Secret Menu took it to the next level, as all quality Secret Menus tend to do. It starts with the French Toast Base – white chocolate, brown sugar, and cinnamon, topped with strawberry sauce (or mixed in if you’d prefer an overall flavor).

If you are not a strawberry fan, you can adapt the French Toast drink any way you’d like by swapping the strawberry sauce for a dark chocolate, blueberry, or banana one. This one can also be served as a Frost, Mocha, Latte, Breve, Freeze, Chai, or Hot Cocoa.

Tons of our readers follow a ketogenic diet, so we were thrilled to find out that there are a couple of keto espresso drinks on the Secret Menu. One is the Iced Keto-Cano Sugar-Free Cookie, which is an americano with cream, sugar-free white chocolate, and sugar-free chocolate macadamia. Its sweet and creamy flavors contrast the bold espresso perfectly.

The other keto drink is the Sugar-Free Dream Weaver, which also starts with an iced americano base. It contains cream, sugar-free white chocolate, and sugar-free hazelnut. 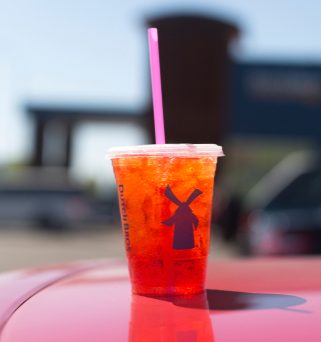 Our Dutch Bros Secret Menu rounds out with the Sunset Burst Italian Soda, a refreshing, bubbly drink that is a blend of passionfruit and coconut with blue raspberry drizzle. If it’s not summertime where you live, it will surely feel like it when you sip on this tropical beverage.

The name of this one doesn’t really give you any hints, does it? The Dirty Caterpillar tastes a lot better than it sounds (seriously, why would you want to drink anything related to a fuzzy bug?). This secret menu creation is like the liquid version of your favorite fall treat. Combining green apple and caramel flavors, it’ll transport you straight into October.

Just like the White Coffee Cookie Breve, this S’mores-inspired drink is full of caffeine – and sugar. It captures that familiar, cozy taste of a S’more with the pure bliss of coffee. To order one, just ask for a breve with chocolate macadamia nut, white chocolate, dark chocolate, and brown sugar cinnamon.

From breves to Italian sodas, Frosts, and Freezes, this underground menu is full of rich, flavorful Dutch Bros drinks you’d never be able to find on the regular menu. But unlike other restaurants, Dutch Bros’ list of secret drinks is always evolving and expanding. Do you know of a Dutch Bros Secret Menu drink that is not listed on our page? Feel free to comment below – we’re always looking for new and creative beverages to add to our list.

You can also check out the Starbucks Secret Menu and the Dunkin’ Secret Menu for more coffee creations.