If you’re like the rest of us, you have a go-to drink you always order when you go to Dunkin’ Donuts. But after asking for the same boring iced coffee, maybe you’re ready to try something else. We’ve got plenty of options for you to choose from on the Dunkin’ Donuts Secret Menu, but first, let’s go over the basics of this underground menu before we dive in.

Places like Starbucks often remind us that there’s technically no real secret menu, and the same concept goes for Dunkin’ Donuts – and pretty much any other coffee shop for that matter. This is because most orders are customized, so it’s not like customers need a secret menu to be able to ask for something unique. However, that doesn’t mean the Dunkin’ Donuts Secret Menu isn’t good for anything – quite the opposite, in fact. For many of us, crafting a one-of-a-kind beverage with the right swirls and flavor shots is rather difficult. But with the Secret Menu, you don’t have to think twice about it. You can use it as a guide to help you discover the most delicious, unique flavor combinations available at Dunkin’. 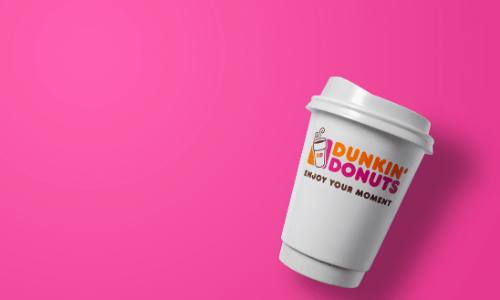 As you order a Dunkin’ Donuts Secret Menu drink, keep in mind that not all Dunkin’ staff will know exactly what you mean by a Captain Crunch Coolata or Nutella Surprise. This is secretive lingo that newer employees may not be familiar with – but don’t panic. The cool thing about the Dunkin’ Secret Menu is that you have a 100% chance of getting the drink you order – in theory, at least. Even if the worker doesn’t know about the beverage you are asking for, all you have to do is tell them the ingredients, and they should be able to make it for you unless it’s some limited-time flavor that is not in season anymore. Feel free to order in the way that you’re most comfortable, whether that’s asking for the Secret Menu item or explaining the ingredients that go in each item.

We just think more fun to be able to ask for a Nutella Surprise.

For those of you who live under a rock, a Coolatta is a frozen drink at Dunkin’, but it typically doesn’t have coffee in it. There are only three Coolatta flavors on the Dunkin’ menu (currently Vanilla Bean, Blue Raspberry, and Strawberry Coolatta), so the Secret Menu is a great way to expand that list and taste-test new flavor swirl and shot combinations. The Secret Menu Captain Crunch Coolatta starts with a Strawberry Coolatta base and is spiked with blueberry and raspberry flavor shots, as well as a bit of cream.

If you can’t decide between a refreshing iced coffee and a cozy hot one, opt for the Toasted French Vanilla Iced Coffee. It’ll give you those comforting feelings you get from sipping a hot beverage from a mug or sitting around a bonfire, but you won’t have to worry about burning your taste buds off. Just ask for iced coffee with french vanilla, toasted almond, and your choice of milk (we like almond or soy).

Dunkin’ Donuts blueberry flavor shots are one of the most underrated add-ons on the menu. You’d be surprised just how fitting blueberry can be with coffee, and the Coco Berry Secret Menu drink is a perfect example of that. Ask for a Mocha Iced Coffee with a shot of blueberry. It tastes like a blueberry muffin. You can order this one hot, but it definitely tastes best as an iced coffee.

If you’re looking for a dairy-free alternative, this beverage tastes great with almond milk, as well.

One of the best ways to get through a long a dreary winter? Getting your hands on this summery beverage. It’s creamy, sweet, and fruity with the texture of a milkshake. To get the Peaches and Cream Coolatta, order a Vanilla Bean Coolatta and ask for three peach shots. Easy peasy!

Dunkin Donuts’ Secret Menu is all about the sugary-sweet drinks, and this Snickers beverage is no exception. You can mimic the liquid-version of your favorite candy bar by ordering a coffee (hot, blended, or iced!) with hazelnut swirl and salted caramel swirl add-ins (one of each). Heck, add some whipped topping and chocolate drizzle on top while you’re at it.

You’ll notice a lot of Coolatta Secret Menu Drinks, and that’s not a coincidence. They are one of the easiest drinks to customize and get creative with because the majority of them start with a blank canvas – and by that, we mean a Vanilla Bean Coolatta. The Birthday Cake Coolatta is one of the most popular Secret Menu drinks (and one of the easiest ones to order), made from just two menu items. Ask for a Vanilla Bean Coolatta with hazelnut swirl, and you’ve got yourself a birthday treat.

You could probably guess how to order this Dunkin’ Donuts Secret Menu Item. Simply ask for a hot chocolate with raspberry flavor. The rich and sweet flavors complement each other impeccably well, and if you really want to get crazy, ask for a Raspberry Dirty Hot Chocolate.

If you’re an Almond Joy lover, you’ve got to get your hands on this Dunkin’ Donuts Secret Menu drink. It consists of toasted almond flavor, as well as one to two shots of coconut and one shot of mocha.

Spoiler alert: if this drink sounds familiar to you, that’s because it did not originate on the Secret Menu. The Almond Joy drink was released as a limited-time offer back in 2016. So while it isn’t technically a part of Dunkin’ Donuts lineup anymore, you can still order it any time of year.

Another throwback Dunkin’ Donuts drink is the Cotton Candy Coolatta, which has been featured on the regular menu in the past. Fortunately for sugar fiends, you may be able to get this blended beverage anytime from the Secret Menu. It has a Blue Raspberry Coolatta base with sour apple and watermelon flavors.

Not to burst your bubble, but there is not anything particularly surprising about the Nutella Surprise. It’s simply code for adding two Mocha Swirls and one Hazelnut Shot to the drink of your choice. It is, however, one of the best things to ever come from the Dunkin’ Donuts Secret Menu because it instantly makes any drink on the menu taste like candy. This secret is fairly well-known in the Dunkin’ Donuts community, so if you ask for an iced coffee with a Nutella Surprise and a splash of almond milk, the worker should know just what you’re talking about.

Many coffee drinkers avoid ordering hot cocoa because it doesn’t contain their drug of choice. However, when you ask for a Dirty Hot Chocolate from Dunkin’, you’ll get the best of both worlds because this beverage contains a shot of espresso. You may recognize this slang from the classic drink Dirty Chai, which is a chai latte with espresso – another drink you cannot go wrong ordering.

For those of you skeptical about eggnog, you’ll be glad to hear that the Eggnog Latte on the Dunkin’ Secret Menu doesn’t contain eggnog at all! It’s a makeshift beverage that combines Vanilla Chai and caramel swirl into a creamy, comforting drink that’s perfect for any time of year.

This one’s super similar to the Nutella Surprise, minus the almond milk. The Hazelnut Mocha Iced Coffee is a creation that Dunkin’ promoted a couple of years ago on their blog, but they never officially released it on the regular menu. Since there’s no fancy name, it’s less intimidating to order – just ask for your cup of coffee – whether it’s hot, iced, or frozen, and get a mocha flavor swirl and hazelnut flavor shot. It’s the perfect fall beverage if you wan’t to try something other than the Pumpkin Spice for once.

So, maybe coffee isn’t your thing. That doesn’t mean you can’t enjoy a warm, cozy drink this fall. The English Toffee Hot Chocolate is perfect for any sweet tooth. You’ll love the nutty, rich flavor (yes, it takes just like a Heath candy bar), and you can customize its sweetness, too. You can order it by name or ask for the salted caramel hot chocolate with French vanilla and toasted almond flavor shots. If you want it extra sweet, ask for more flavor!

Coconut and mint may not be the first thing you think of when you want a nice cup of hot chocolate, but trust us – this combo is legendary. It’s both refreshing and comforting – everything hot cocoa was designed to be and more. Neither flavor addition is overwhelming, so you can still taste the creamy chocolate. In fact, this is another secret menu creation that Dunkin’ wrote about in their blog back in 2018, so you know it has to be the bee’s knees. Just ask for a mint hot chocolate with a coconut flavor shot.

We’ll be the first to admit that this secret menu drink sounds way cooler than it actually is. Hear us out. The Upside-down Iced Caramel Macchiato is the exact same thing as a regular caramel macchiato, but its ingredients are blended together instead of in layers. You know the feeling when you take a sip of your beverage and you get bitter, creamy, but not at the same time? When you order your macchiato this way, it eliminates the extra step of having to stir your drink together. Some say it’s genius, some say it’s lazy. We’ll let you decide.

If you’re desperately trying to hold onto summer, this is the drink for you. You’re mind with slip back into the days of sunshine and no responsibilities when you sip on this fruity concoction. Apparently there are a few different recipes floating around on the internet for the Pina Colada Coolata, but this is the only one you’ll need. Just order a Pineapple Coolatta and add in a coconut crème pie flavor swirl.

If you’re new to ordering at Dunkin’, their terminology can be confusing, especially when navigating the Secret Menu. We’ll cover a few of the basics to help prime you.

What is the swirl at Dunkin’ Donuts?

For starters, a swirl is a cream-based flavoring that has added flavor, like Caramel, French Vanilla, Hazelnut, Mocha, Winter White Chocolate, and Buttery Toffee Nut. You can add swirls to any drink to customize it and make the flavor more indulgent.

What does Dunkin Donuts use for flavor shots?

A flavor shot, on the other hand, is less heavy than a swirl. According to the Dunkin’ Donuts website, a shot is “unsweetened and sugar free.” Available shots are French Vanilla, Hazelnut, Caramel, Toasted Almond, Blueberry, Raspberry, and Coconut, plus seasonal flavors.

Keep in mind, you can always customize your Secret Menu drink, just like you do with any other Dunkin’ Donuts order. We won’t judge you for coloring outside the lines. Feel free to swap a flavor shot for another, or regular milk for oat milk (coming soon, BTW). If you know of another underground drink at Dunkin’ Donuts that we didn’t mention on our list, let us know in the comments below so we can add it! We love to hear about new and creative beverages customers are crafting.

To learn more about deals at the coffee shop franchise, check out our Dunkin’ Happy Hour Page.