The day Chick-Fil-A discontinued its coleslaw was a sad day. Customers were left distraught, boycotting the restaurant for discontinuing one of the most beloved items on the menu. But if you remember that day as clearly as I do, you know the restaurant left us all with a parting gift – one that no fast-food restaurant would dare to give in any other circumstance. Chick-Fil-A, however, is a godsend (if you’ve ever read my Chick-Fil-A Mac and Cheese Review, you know just how much I believe this statement) and gave us a copy of their original coleslaw recipe.

So as much as I want to, I can’t take credit for creating this incredibly easy, refreshing recipe. However, once you try it, you’ll be thanking me for sharing it with you. There’s very little prep that goes into this dish – essentially all you have to do is combine the handful of ingredients and pop it in the fridge for a couple of hours to chill. It’s the perfect side for a cookout, complementing anything from burgers to hot dogs, fried chicken, and pulled pork. 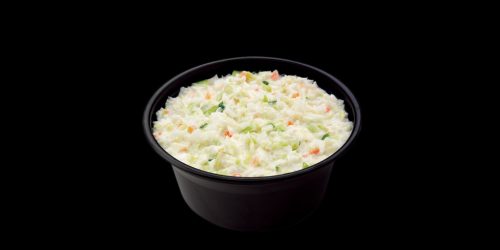 Will Chick Fil A Bring Back coleslaw?

Chick-Fil-A will not be bringing their Cole Slaw side dish back after discontinuing it in 2015. This is because the restaurant released the original recipe for the slaw for customers to make at home. Once the secret’s out, there’s no going back. Customers were awfully upset about the side dish being discontinued, making threats to boycott the restaurant if they didn’t bring it back.

Why did Chick-fil-a discontinue coleslaw?

Chick-Fil-A discontinued coleslaw because they wanted to make room for other sides. Since it was discontinued, they have tested out the superfood side, Kale Crunch side, and mac and cheese.

How bad is coleslaw for you?

Coleslaw’s nutritional value depends on which ingredients you use. Generally, it is not considered a healthy dish because it contains higher amounts of fat and sodium. However, if eaten in small amounts or as a side dish, it isn’t necessarily bad for you.

For more Chick-Fil-A recipes you can make at home, check out our Copycat Chick-Fil-A Sauce Recipe!