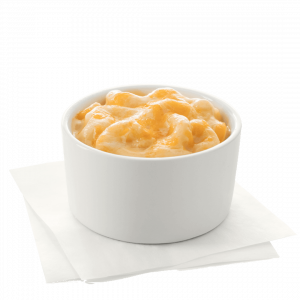 While I normally go into reviews with an open mouth and an open mind, I have to admit that I was sold on Chick-Fil-A’s Mac and Cheese before I even pulled into the parking lot. Here’s why: There are few things in life I love more than a bowl full of macaroni and cheese – my husband and Chick-Fil-A are both included on that list, though. For some, it would be like if your celeb crush asked you on a date. You would have the wedding planned before you even shook their hand. I’m not saying I’d marry Chick-Fil-A’s mac and cheese or anything, but the lust for this franchise is definitely there.

Moving on. Chick-Fil-A first rolled out the Mac and Cheese in August of last year, and it was the first new side they had released on the permanent menu since 2016. The restaurant capitalized on the world’s already-existent love for the side dish, dubbing it “quintessential comfort food.” And as many would assume, the launch was a raging success. Fans turned to Twitter to share their adoration for the new menu item. One user said “I promise someone’s grandma has to be making that Mac and Cheese at Chick–fil–A. Another said, “Chick-fil-A has Mac and cheese now…I will never eat Mac and cheese anywhere else again.”

And if I had a Twitter, I’d be right there with them.

Maybe I’m hyping it up way too much, so let’s take an in-depth look at the flavor profile, nutritional information, and value of Chick-Fil-A’s Mac and Cheese so you can decide for yourself. I’ll do my best to be impartial from this moment forward.

When Chick-Fil-a first announced the release of the Mac and Cheese, a representative of the restaurant claimed the new side dish will have a “homemade taste,” but if you ask me, there’s a lot more that goes into making something homemade than taste and taste alone. It’s about the initial smell, presentation, texture, and taste.

When I was first handed my medium-sized mac and cheese, I was pleased to feel heat radiating off the paper cup. I immediately found a place to park my Corolla because I’m impatient and wanted to take a bite while the cheese was still gooey. Upon peeling the lid off, I got a subtle waft of cheddar cheese, the delightful kind you get when you pull open the oven just a sliver to check in on the food’s progress. Before I took that first bite, I had to admire the crisp, thin layer of golden brown cheese baked on top, concealing the rest of the noodles underneath.

As I broke through the cheesy layer with my fork and took a bite, I was greeted with a familiar taste even though it was my first time trying Chick-Fil-A’s mac and cheese. I will say, they hit the nail on the head with the whole “homemade” thing. It really did taste like something my grandma could have whipped up for a summer cookout, especially compared to other fast food mac and cheese. It was far from KFC’s (in a good way), which is essentially noodles and liquid cheese sauce – no added texture.

As for taste, you can tell there are multiple kinds of cheese in the dish, though I couldn’t pinpoint which ones besides cheddar until I looked it up. Parmesan and Romano, too. The three blend well, creating a creamy, classic flavor, but there was just one thing missing. Okay, two things. Maybe a little paprika and some pepper. The best mac and cheese dishes I have ever had have a complementary flavor alongside the rich cheese taste, something to give it a bit of a kick, which Chick-fil-A’s lacked.

Don’t let anyone ever tell you mac and cheese is healthy. While the restaurant’s press release states the dish is baked fresh each day, that doesn’t exactly scream nutritious. With the main ingredients being pasta and cheese, how could it? However, the portion sizes are appropriate to eat with a meal, so it’s not like you’re ingesting five pounds of pasta like you might at Olive Garden (much love, OG).

I’m no dietician, but something tells me 1190 mg of sodium and 29 grams of fat isn’t necessarily healthy, but if you’re not concerned about either of those variables, a cup of mac isn’t going to hurt you.

When you look at what most fast-food chains have to offer for sides – chips, greasy fries, onion rings, and mozzarella sticks – it seems like a no brainer to at least try Chick-Fil-A’s Macaroni and Cheese.

While the dish is a bit more expensive than most fast-food sides, you’re getting your money’s worth because it is made fresh, is filling, and perfectly complements a chicken sandwich and nuggets.

As expected, I don’t have many criticisms about this dish. I will admit that it isn’t quite on the same level as homemade Mac and cheese (when done right of course), but it certainly is close. Plus, it far surpasses any other fast food Mac and cheese on the market. If you’re craving a creamy, filling bowl of authentic-tasting mac, Chick-Fil-A’s will not disappoint.

I did my best to be impartial, guys. But you can only be so objective when it comes to the Promise Land. I hope you enjoyed this Chick-Fil-A Mac and Cheese Review, and if you totally disagree with me, let me know in the comments below. A little debate never hurt anyone.