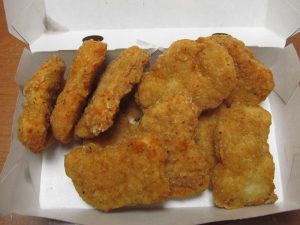 Chicken nuggets are a staple item for most fast-food restaurants, so how does Burger King stay ahead of the game- or at least on par with its competitors? Occasionally, the franchise changes its recipe – I’ve noticed a change in shape, size, and flavor over the years. But now BK has found a new way to keep up with the Joneses- by offering crazy cheap nuggets at bigger portion sizes. Ten nuggets for under $2 is a fantastic deal price-wise, but is it worth it?

Burger King has offered chicken nuggets since 1985, but things have changed along the way. They now sell 10 chicken nuggets at a crazy low price of $1.49, and sometimes this price hovers around $1. How is it possible to sell nuggets at this price and still make money? According to Burger King’s consultancy group, the idea is to bring in customers from other fast-food restaurants. With a value menu or a crazy good deal, they can get customers through the door, and then encourage them to buy other items. The franchise may lose a little money on nuggets, but they make up for it in other sales. And it seems to be working, as they’re maintaining their share, keeping up with competitors.

Burger King offers its Classic Chicken Nuggets as well as their Spicy Chicken Nuggets. Unfortunately, the spicy nuggets aren’t a part of BK’s permanent menu, but they enter the scene every once in a while to shake things up. This summer, participating locations offered an 8-pack of spicy nuggets for $1- a fantastic deal for those of us who like a spicy kick to our meals. If you have a craving for spicy nuggets during an offseason, try dipping regular nuggets in Burger King’s Zesty Sauce.

Burger King describes their chicken nuggets as “small bites with big flavor”. Made with white meat, the bite-sized Chicken Nuggets are tender and juicy on the inside and crispy on the outside. They got the “small bites” part correct. As far as the flavor, it’s decent, but is it all it’s advertised to be?

The nuggets are a bit smaller than some of the other chicken nuggets out there. The breading isn’t particularly thick, and honestly, neither is the chicken.  If they’re fresh off the fryer, they have a crunchy bite, but if they’ve been out for longer than a few minutes, the crunch-factor shrinks significantly. The plus side of this is that Burger King offers 10-piece nuggets because a 4 or 5 piece just won’t cut it. Taste-wise, the nuggets are decent. They have a good mix of salt and pepper seasoning, and the breading is mid-range crunchy. They’re not particularly exciting in either taste or appearance, but you can enhance the flavors with dipping sauce- I like the honey mustard.

Deep-fried chicken nuggets typically aren’t the healthiest food option. They’re high in fat and sodium, and the meat isn’t as “premium” as some advertisements may promise. However, Burger King’s Chicken Nuggets aren’t as unhealthy as some of their other items. They have more fat than the grilled chicken sandwich, but much less sodium and calories. While lean meat is a better protein source, these nuggets give you about 20 grams of protein- so that’s a plus. It’s a good idea to pair your nuggets with veggies or a salad if you want your meal to offer some nutritional value.

This is an incredible deal for chicken nuggets at $1.69 for 10 nuggets, even though they’re small and a little thinner than some of the other fast-food nuggets. Kids love them, and with fries and a drink, it’s a decent lunch option. Burger King is a convenient fast-food option, as you can find a location just about anywhere in the US and abroad, so if you’re looking for a quick cheap chicken nugget fix, this would be a good choice.

I’m not a huge fan of Burger King’s Chicken Nuggets. While the price is great for the portion-size, they’re not the best nuggets out there. The flavor isn’t memorable, and you need dipping sauce to give the nuggets some pizazz. The best part of the nuggets is that there are 10 of them, but I’d rather have 5 or 6 delicious nuggets that cost more than 10 so-so nuggets. However, my kids have never complained about them, and keeping kids happy and full is a plus!

While the 4-piece nugget is priced at $1.19, Burger King is offering their 10-piece for $1.49 competing with other fast-food giants like Wendy’s and McDonald’s. However, if you’ve eaten these nuggets before, you might notice that this price point has changed over the years. At one time, the nuggets were nearly $2, and at another, they were as low as $1. The price of chicken is at historic lows, giving Burger King and other restaurants some wiggle room to play with the price, working in favor of chicken-loving customers.

What’s your experience with Burger King’s Chicken Nuggets? If they’re not your favorite, does the price sway your decision? And which dipping sauce do you prefer? Let us know in the comments below.