You are here: Fast Food Prices > Best Chain Restaurant Steak Dinner in the US

Steakhouses may feel like a thing of the past, now that ordering the same thing from Door Dash three times a week is our new normal. However, it’s time to resurrect the beauty of cutting into a juicy, flavorful cut of meat. After all, you deserve to treat yourself after the year we just got out of. From your classic franchise steakhouses to more upscale options, I’m ranking the best chain restaurant steak dinners in America, and the best part is – most of these places are partnered with delivery services so you can eat your fancy meal in your jammies. Bon apetít!

LongHorn Steakhouse has always been and always will be my favorite steakhouse. It falls somewhere between upscale and casual and never fails to serve some of the best steaks at pretty good prices for what you’re getting. The options are endless, but I’m a huge fan of the Porterhouse, a giant 22 ounce bone-in strip and a tender filet. I normally order it Medium with a side salad with ranch and a Loaded Idaho Baked Potato. There’s just something about steak and potatoes that other sides just can’t compete with.

Okay, so Greystone Steakhouse is one of those places you go when you just got a holiday bonus or someone else is paying. It’s not cheap, but the steaks are damn good. The Filet Mignon with Bordelaise Sauce is one of the smallest cuts on the menu, but it’s still a whopping $48.95 just for the steak itself. So if you’re thinking about getting a side or appetizer, make sure you sell something nice on Facebook Marketplace first.

If that doesn’t tell you how snooty this place is, I’m not sure what will. 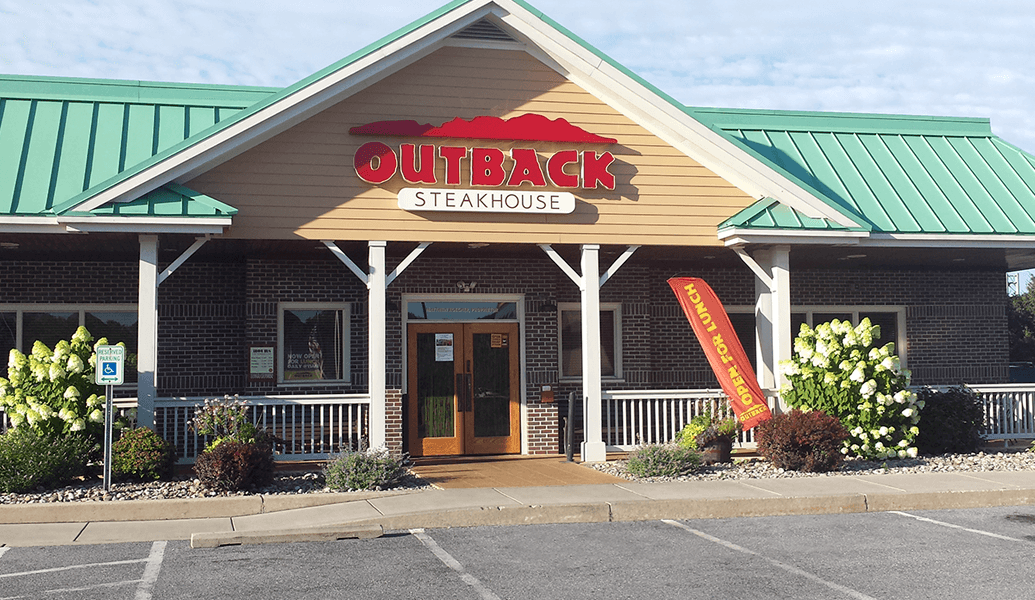 Moving onto the more affordable steakhouses… Outback is a great place. It’s fun, it’s loud, and the drinks are strong. What more could you ask for in a chain steakhouse? My pick on the menu is usually the Bone-in Natural Cut Ribeye. According to the menu, this guy is “extra marbled for maximum tenderness.” For us regular people, it’s just the (*delicious*) fat that’s in the muscle, which makes the steak super juicy and flavorful. If you’re not a bone-in kind of guy/gal, they also have an excellent (and boneless) ribeye on the menu.

Do not sleep on Medallions, you guys. These small filets are bomb and super tender. I’ve had tons of people tell me that they don’t like steak, but they love medallions. At Roadhouse, the meal comes with three three-ounce filets with a yummy Peppercorn sauce and seasoned rice. You also get to choose two sides, and I normally go for broccoli and a salad if I’m feeling healthy.

The Thunderbird not only sounds dope, but it’s Quaker Steak & Lube’s *signature* steak which automatically makes it even cooler. Okay, maybe not, but it is delicious. In fact, the restaurant recently bumped up the size of this bad boy, so it’s now a full 10 ounces. It’s a center cut top sirloin that’s aged for at least 25 days. If you’re not hip to steakhouse lingo, that just means the flavors will be more prominent. Some form of wizardry, I guess.

When I think BJ’s Brewhouse, I don’t usually think of steak. It’s more of a wings, beer, and pizza kind of place if you ask me. But on the right occasion, I’ll go for a nice ribeye to accompany by IPA. The Classic Ribeye is a healthy 14 ounces and comes with two sides. You know by know I’m a fan of a good ole house salad and baked potato, but if I’m feeling risky I’ll order a Honey Sriracha Brussels Sprouts.

Claim Jumper isn’t a steakhouse, per say. They actually claim to have “something for everyone” on the menu, which is great, but when I go there, my eyes go straight to the Country Fried Steak. I won’t order anything else, to be honest. The steak is Certified Angus Beef® that’s breaded, fried, and topped with house-made country gravy. Oh, and it comes with a side of mashed potatoes. Sure, they’ve got a ribeye, sirloin, and pretty much every other cut of steak, but how can you pass up a comfort meal like this? You can’t, that’s how.

I normally only have prime rib on Christmas Eve, but if I happen to be at Smokey Bones and notice it’s on the menu, I will order it every single time. There’s just something so satisfying about it paired with au jus and asparagus. There’s no other way to order it – I’m convinced.

If you’re a big steak fan, you’re usually into seafood, too. I don’t know what it is, but that’s my theory and I’m sticking to it. In all seriousness, Red Lobster has some awesome options if you’re in the mood for surf and turf. Naturally, I chose the fanciest one because who doesn’t want to order a New York Strip with Lobster? This menu option isn’t always available, but you can usually ask your server if they’ll make it anyway. They always have steak and lobster on the menu.