A classic burrito is a no fail fast food option. You get your favorite protein, veggies, and carbs wrapped up in one central location. You can eat it on the go, on your couch, or on a date. Smother it in queso or keep it lean, whatever your heart desires. Now that we’ve got you craving your go-to Chipotle or Freebirds order, it’s time to jump into the good stuff. Here’s a roundup of the best fast food burritos to broaden your horizons, from carnitas to carne asada and more. 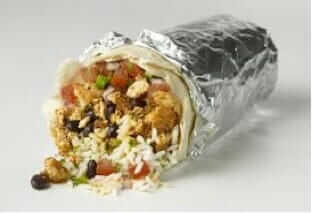 Most of us have a go-to Chipotle order that includes either chicken or steak, but the Mexican restaurant’s Carnitas Burrito is the way to go if you want to try something new and slightly less basic. The slow cooked pork is full of savory and sweet flavors with just a bit of a kick. You’ll want to pair your carnitas burrito with pinto beans, rather than black because the flavors complement each other flawlessly. From there, you can add anything and everything you want to your dish, but we always recommend going for the fajita vegetables, corn, pico de gallo, sour cream, shredded cheese, and lettuce.

Chipotle’s chips taste wonderful with the slow-cooked carnitas, too, so if you’re feeling extra hungry, order a side of tortilla chips and use them to scoop up and remnants of your burrito that end up falling out (you know they will). 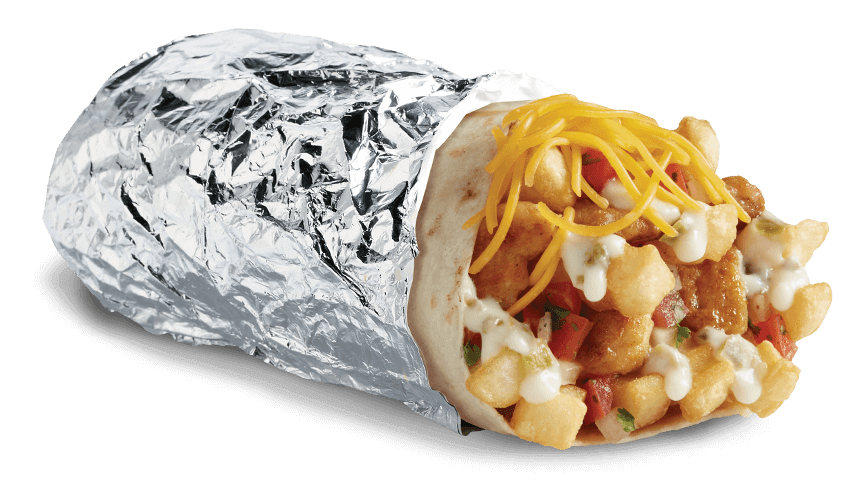 There’s less room for dietary concerns when you order the Epic Loaded Queso Burrito, but it’s a game changer. As the name suggests, this epic burrito may seem like it’s filled with an unlikely combination of ingredients, but once you taste it, you’ll understand. First, choose from freshly grilled chicken, carne asada steak, or Beyond meat®, as your protein. Then, the burrito is stuffed with Crinkle-Cut Fries, Queso Blanco, cheddar cheese, and pico de gallo, all wrapped in a flour tortilla.

For comparison, it’s about the same size as a Chipotle burrito, which is a hefty portion in the fast food word. The burrito typically goes for five bucks and weighs an entire pound, but it’s worth every penny. 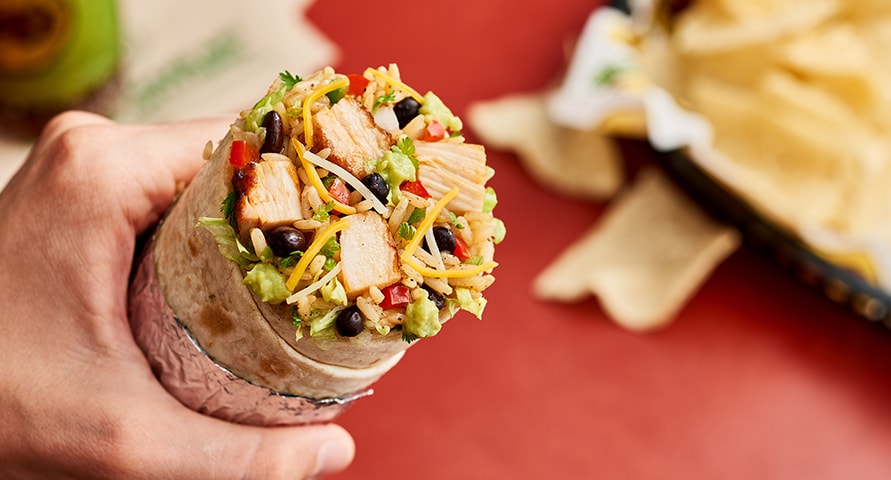 Moe’s doesn’t hold back with the Homewrecker burrito, as the name hints. It’s got all the basics and then some with handcrafted guac, seasoned rice, beans, shredded cheese and your choice of protein (options include carnitas, steak, chicken, ground beef or organic tofu). The size does live up to the title and can be rather challenging to eat it all in one sitting, but who doesn’t love leftover Mexican? Moe’s is pretty great at distribution when it comes to their burritos, too. None of the ingredients over power the other, and you get an even amount of everything in each bite. And if you’re feeling wild, add your side of salsa to the inside of the burrito for an extra kick. 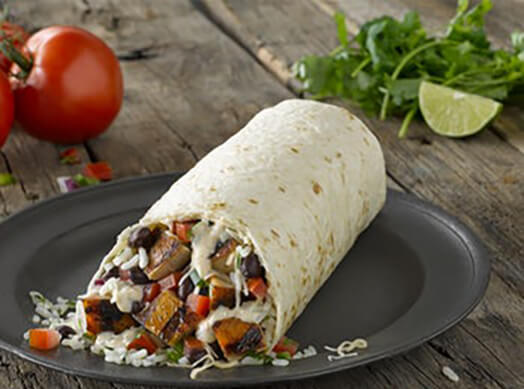 The Chicken Queso Burrito is new to Qdoba, but it’s essentially all your favorite ingredients all wrapped up in a tortilla. The burrito comes stuffed with all the goods – grilled adobo chicken, 3-Cheese Queso, pico de gallo, shredded cheese, corn salsa, cilantro lime rice, and black beans. You might as well add some guacamole on there, too because Qdoba doesn’t charge extra (unheard of, right?). Keep in mind, this burrito is listed as is a limited time offer on the Qdoba menu, but the restaurant isn’t axing any of the ingredients that goes into it, so if it disappears off the menu one day, just order a chicken burrito with all of the same toppings.

The Chicken Queso Burrito is a bit pricer than other fast food burritos, usually going for about $8 a pop. 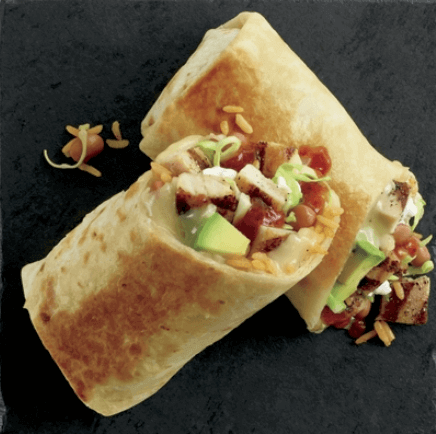 El Pollo Loco doesn’t have to try to be superior to other fast casual places – they just are. With unique and authentic flavors and ingredients, it’s hard to beat the home of fire-grilled chicken, and this burrito is just another display of its greatness. The Chipotle Chicken Avocado Burrito has those rich, fiery flavors mixed with fresh, crisp veggies for a one-of-a-kind flavor. It’s stuffed with rice, cabbage, salsa roja, avocado, Montery jack cheese, pinto beans, chicken, and sour cream. And if you’re not feeling chicken, this burrito would be killer with El Pollo Loco’s Baja Shrimp, too. 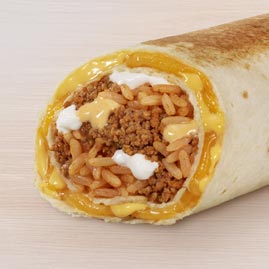 People love the Quesarito so much that they copied Taco Bell’s concept and put it on Chipotle’s secret menu. This mouthwatering combination of a quesadilla and burrito is a classic favorite at T-Bell, and while it may not be the thickest or healthiest option on our list, it certainly is the one that has the most loyal fanbase. The Quesarito comes with seasoned beef, seasoned rice, reduced fat sour cream, and chipotle sauce with shredded cheese and nacho cheese melted in the outer tortilla shells. You can also swap the beef for grilled chicken and add beans to it for added flavor/texture. It’s a cheap, yet filling option (sounds like the whole Taco Bell menu), and if you’re worried about still being hungry, add something from the $1 cravings menu. 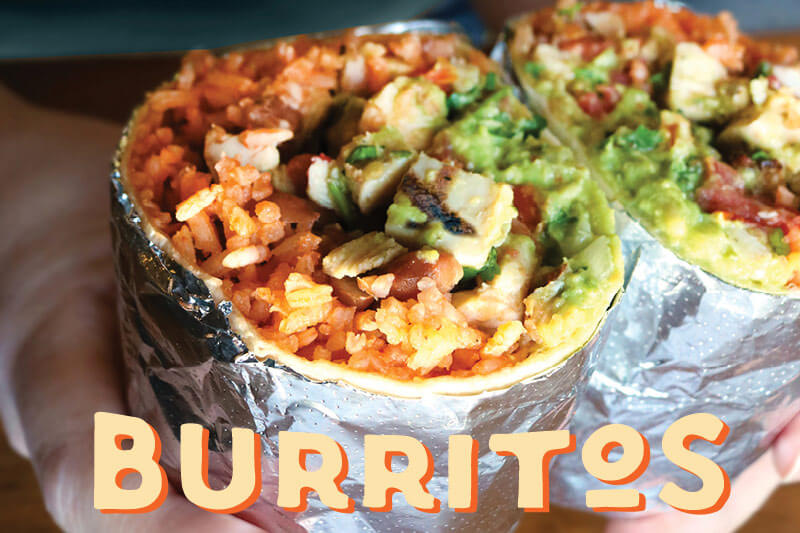 Freebirds is most famous for its enormous burritos. You can order a normal-sized one, but what’s the fun in that when you can walk away with a Super Monster that’s bigger than your face? And while you really can’t go wrong with ordering anything on the menu, the Slow Roasted Carnitas burrito is a 10/10. Just like Chipotle, Qdoba, and the others, you can fill your Freebirds burrito with anything you want, like Spanish or cilantro-lime rice, pinto or black beans, Monterey Jack or cheddar jack cheese, sauce (habanero salsa, creamy jalepeno, death sauce, hot tomatillo salsa, mild tomatillo salsa, fresh house salsa, BBQ sauce, or lime juice), and “freebies.” Freebies are just a fun way of saying additional toppings that don’t cost extra, and those include roasted garlic, sautéed peppers/onions, cilantro, diced jalpenos, pico de gallo, sour cream, white onion, shredded lettuce, mixed greens and ranch.

Overwhelmed yet? You can finish off your burrito with guac and/or queso for an added cost. 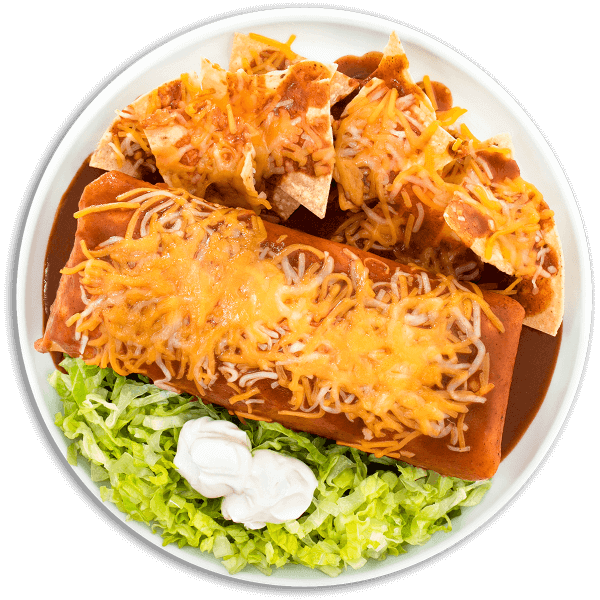 Sure, Baja Fresh has “regular” burritos on the menu, but we couldn’t pass up the opportunity to showcase this deliciously saucy alternative. Take any burrito on the menu and order it “Enchilado Style,” and Baja Fresh will turn your ordinary dish into a smothered burrito with red chile sauce, melted jack cheese, sour cream, and a side of chips. You can’t go wrong with choosing any of the burritos on the menu, either. Your options are the Baja Fresh burrito with guac, pico, and your choice of protein; the Mexicano Burrito with rice, beans, salsa, onions, cilantro, and your choice of protein; the Burrito Ultimo with grilled veggies, salsa, cheese, rice, sour cream, and protein; and the Roasted Veggie Burrito with peppers, chiles & onions, beans, cheese, lettuce, pico, and sour cream.

Craving a burrito in the AM? Check out these fast food breakfast burritos.