There’s something about starting off the day with a breakfast burrito that makes everything better. While they don’t tend to be the healthiest option, they’re loaded with savory, greasy meats, eggs, and cheeses, and depending on where you go to order one, you can even score a burrito stuffed with crispy hash browns or veggies. Dip them in sour cream, salsa, or hot sauce for an extra kick. And the best part of all is that the best fast food breakfast burritos are often one of the cheapest and most filling options, so you can start your day with a full stomach and wallet. 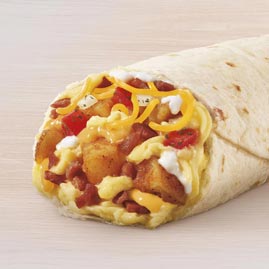 Many breakfast burritos lack a diverse flavor profile – but not Taco Bell’s Grande Scrambler.  Stuffed with bacon, pico de Gallo, sour cream, potatoes, shredded cheese, nacho cheese sauce, and scrambled eggs, you’ll find yourself full and satisfied with this breakfast burrito. And since you can customize all your meals at Taco Bell, try swapping the shredded cheese with a three cheese blend and adding jalapeño sauce and guacamole for an even more flavorful dish.

Del Taco is another fast food joint that knows how to whip up a savory breakfast burrito. It’s got all the basics of course – bacon, eggs, and cheese – but it’s loaded with other spicy, flavorful ingredients that give it an extra kick. You’ll bite into a piping hot tortilla stuffed with scrambled eggs, handmade pico de gallo salsa, cheddar cheese, red sauce, and hashbrown sticks, as well as your choice of bacon, chorizo, or carne asada. 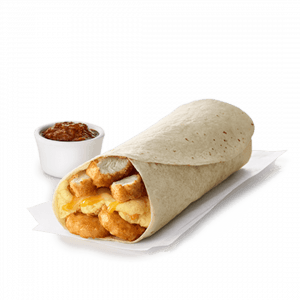 The Chick-Fil-A breakfast burrito is unlike anything else on our list. Rather than loading up on greasy bacon, Chick-Fil-A puts the spotlight not their signature chicken, paired with seasoned hash browns, scrambled eggs, Monterey Jack and Cheddar cheeses. The burrito comes in a flour tortilla with a side of jalapeño salsa. You can order grilled chicken strips or traditional nuggets in your burrito, but if you’r not a big chicken guy (or gal), you can sub it with breakfast sausage.

The burrito is a decent size, but if you want to round out your meal, try it with a fruit cup or parfait and iced coffee (theirs is the best.)

When Wendy’s decided to relaunch their breakfast menu this year after nearly a decade without it, the Sausage, Egg, & Cheese burrito made the cut, alongside a handful of other new items like the Honey Butter Chicken Biscuit. This recipe is relatively simple compared to the ones we’ve shared above, but it’s a solid option if you need a quick, tasty breakfast on the go. Just as the title insinuates, this breakfast burrito features seasoned sausage, scrambled eggs, and shredded cheese in a warm tortilla.

Cleanse your palate with a sweet and rich Frosty-ccino – the only excuse you need to have ice cream in the morning.

McDonald’s and Wendy’s sausage burritos may share similar titles, but this fast food breakfast snack is more than just a flour tortilla, scrambled eggs, and cheese. In addition to those ingredients, McDonald’s burrito is stuffed with a blend of veggies like green chiles, and red peppers. And like many cheap fast food burritos, this one is on the smaller end, so you’ll want to order a couple of hash browns if you’re super hungry. 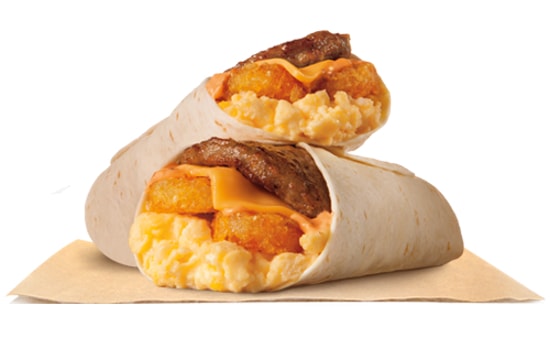 Speaking of hash browns, Burger King’s Breakfast Burrito Jr. highlights their crispy fried hash browns alongside seasoned sausage, eggs, melted American cheese, and spicy sauce. As you may have noticed, most of the burritos on our list don’t incorporate added sauce into their recipes, so this is a nice change of pace. It’s not too spicy, but you can always ask for it without the sauce if you’d prefer. And even though this guy has “junior” in the title, it’s honestly not much smaller than competitors’ regular-sized options. It is cheap enough, however, to order two and not feel bad about it. 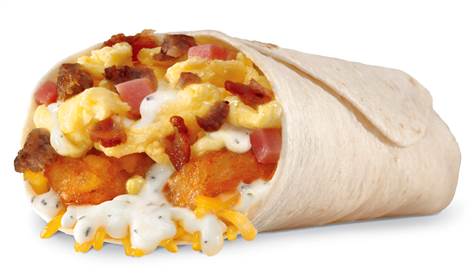 There’s something superior about breakfast burritos that feature multiple types of meat. Hardee’s Loaded Breakfast Burrito is a triple threat with crumbled sausage, bacon, and diced ham.Then, you’ve got the usual suspects like scrambled eggs, cheddar cheese, and a warm flour tortilla. Its paired with a zesty salsa that’s served on the side, but I like to unwrap the burrito and drizzle it on top of the other ingredients so it blends in with the flavors.

Wawa is the hidden gem of fast food. While it may be a rest stop more than a drive-through, the quick-stop joint serves of the most delicious fast food items, including breakfast sandwiches and built-to-order breakfast hoagies, melts, bowls, and burritos. It’s hard to choose one particular combination to highlight – customers can choose from protein options like Sausage, Applewood Smoked Bacon, Cheesesteak, and Veggie. There are a whopping 21 burritos on their menu, ranging from the Cheesesteak Egg White Omelet to the Applewood Smoked Bacon and Veggie Egg Omelet. 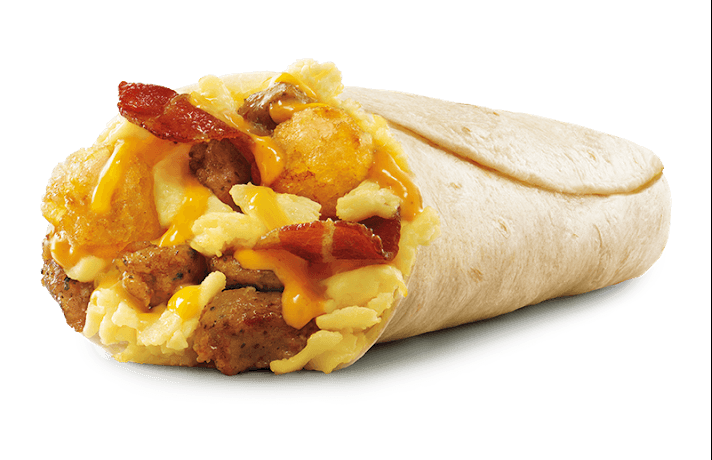 Sonic sells a few variations of the breakfast burrito, but this is the grand-daddy of them all, so of course we had to include it on our list. If you like a big breakfast, opt for this tortilla stuffed with eggs, bacon, sausage, golden tots, and cheese. Can’t do a burrito without veggies? Opt for the SuperSonic burrito, which contains sausage, scrambled eggs, cheddar cheese, golden tots, onions, tomatoes and spicy jalapeños.

Not in the mood for a burrito? Check out the best fast food breakfast sandwiches.