You are here: Fast Food Prices > The Best Burger Battle: Five Guys vs. Whataburger vs. In-N-Out

When it comes to fast food burgers, you’re probably used to eating at McDonald’s or Burger King, but most people would not consider those the best burger restaurants. That’s because there are three restaurants that top all others in the industry: Five Guys, Whataburger, and In-N-Out.

Although these three restaurant chains aren’t as widely available as McDonald’s, you should have access to at least one of them. But just a warning: Five Guys will probably be more expensive than any other burger from a fast food restaurant, however, it is well WORTH it! 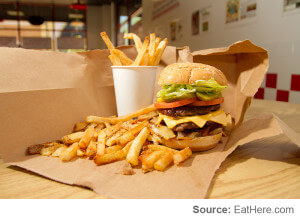 Five Guys was founded in Lorton, Virginia, in 1986, so it is not that old of a company. There are currently over 1,000 locations throughout the United States and Canada and many more are planned.

As mentioned earlier, Five Guys prices can be a little high if you’re not used to eating there. Their regular Hamburger is about $5.39, so you are probably shocked, right? However, keep in mind that the regular Hamburger has 2 all-beef patties and almost any toppings you want.  That’s only about $1 more expensive than the Double Whopper from Burger King.

What’s so special about Five Guys? The most important aspect is the freshness of their food. They do not start cooking till you order, which means you can see them make your burger right in front of you. Although their burgers are simple, you can add any toppings you want including:

Other than having tasty burgers, Five Guys also offers Little Hamburgers and Cheeseburgers, which come with only one patty. They also have a Veggie Sandwich, Grilled Cheese, BLT, Hot Dogs, and Fries. 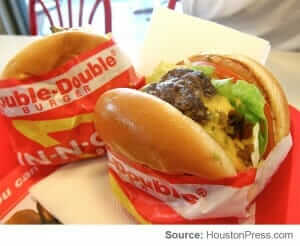 Whataburger is a much older restaurant than Five Guys as they started in 1950. There are currently over 700 Whataburger locations, which is slightly less than Five Guys, but they are mainly available in the southern part of the United States.

Whataburger prices are a little cheaper than Five Guys, however, if you get the Double Meat Whataburget, it will end up costing about $1 less than the Five Guys Hamburger so the price difference is not huge.

The burgers from Whataburger are similar to Five Guys, although they tend to be slightly smaller and the beef-patties aren’t as thick or meaty. The original Whataburger comes with mustard, lettuce, tomatoes, pickles and diced onions, but you can customize it how you like it. 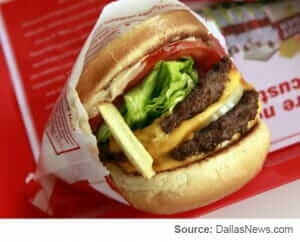 In-N-Out is a much smaller company than Five Guys and Whataburger with only about 280 locations in 5 states including California, Nevada, Arizona, Utah, and Texas. Having been founded in 1948, it is the oldest of the three companies.

In-N-Out food is CHEAP! By cheap, we mean it is very inexpensive. Depending on which location you go to, you can get their Cheeseburger or Hamburger for less than $2 or combos for less than $4. Their menu is very simple. They have Cheeseburger, Hamburger, Double-Double, French Fries, Combos, and drinks.  So while your choices are quite limited, the choices that are available are spectacular.

If you are looking for a cheaper burger, In-N-Out is a better choice than both Five Guys and Whataburger without a doubt!

So now that we know a little bit about each of these restaurants, how does their food stack up against one another?

You will usually get a different answer depending on whom you ask, but we think Five Guys has the best burger of the three restaurants. Their burgers are the tastiest, the meatiest, and you have many toppings to choose from. As a side, you can also get as many free peanuts as you want!

The second place would be Whataburger, however, it was close. Although we thought Whataburger tastes slightly better, we can understand many choosing In-N-Out instead. Both burger joints have their own special taste, but neither compares with Five Guys.

And the third place would be In-N-Out. Although In-N-Out has a loyal following that would argue that it’s the best burger in the world, we didn’t think so. Their burgers don’t tend to be as juicy or meaty as Five Guys. However, they make some great fries, which they’ll cut up right in front of you.

So there you have it. In our opinion, you get what you pay for, and the most expensive restaurant of the three tends to be the best tasting as well. And while the other two choices are not bad, we just don’t think they’re even close to Five Guys.

If you have all three of these restaurants near you, you should consider yourself lucky, as In-N-Out and Whataburger are not available in the northern part of the country.

Which of the three do you like the most? Let us know in the comments.