You are here: Fast Food Prices > How Much is a Whopper from Burger King?

In order to answer that question, we have to take several things into consideration. For one, there are a few different Whopper burgers, including the Whopper, Double Whopper, Triple Whopper, and Whopper Jr.  Occasionally, there are also specials such as an Angry Whopper, which is a Whopper with jalapeños. 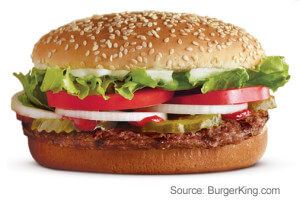 The Single Whopper is a 630 calories burger that contains Whopper beef patty, tomatoes, pickles, lettuce, onions, mayonnaise, and ketchup on a sesame seed bun. The Whopper is one of the manliest burgers you can get and its nutritional content shows that.

This 630-calorie burger has 25 grams of protein, 57 grams of carbs, 13 grams of sugar, 35 grams of fat, and 980 milligrams of sodium. As you can see, this is one meaty and heavy burger, so don’t go too crazy on it. One Whopper should be enough for your meal.

So how much is a Whopper?

As always, it depends where you live but the average price is around $3.49. For the Whopper meal, which includes small fries and small drink, it will run you about $5.79.

If the Single Whopper is not enough for you, Burger King also offers a Double Whopper. The ingredients are essentially the same except this time you are getting 2 Whopper burger patties.

The extra burger patty makes the Double Whopper an 830-calorie burger. Along with that comes 42 grams of protein, 57 grams of carbs, 13 grams of sugar, 50 grams of fat, and 1040 milligrams of sodium. If you choose the Double Whopper for your meal, it should absolutely be the only thing you eat for that meal.

How much does the Double Whopper cost?

The Double Whopper is about $4.39, which is only around 90 cents more expensive than the Single Whopper.

Ok, so we’re done with Whoppers, right? Wrong! For some unknown reason, Burger King makes a Triple Whopper. Yep, you heard that right. It has three Whopper beef patties.

The Triple Whopper is a whopping 1,020 calories and it is a ginormous burger. If you’re eating this, then it should be the only thing you eat that day other than a small salad or something similar.

What is the Triple Whopper priced at?

This mammoth of a burger will cost you about $5.29, which is another 90 cent increase over the Double Whopper.

Honestly, I don’t know who would eat a Triple Whopper, but I would be very careful in limiting your other meals for the day.

Finally we have a Whopper that goes down in size for once. The Whopper Jr. is smaller than the Single Whopper.

How much is the Whopper Jr.?

The Whopper Jr. in on Burger King’s value menu and it is priced at a reasonable $1.79. For that price, you get a very flavorful burger that isn’t loaded with calories and fat.

So how does the Whopper burger compare with the Big Mac from McDonald’s? The Single Whopper is about 50 cents cheaper than the Big Mac, however, it also has about 80 calories and 6 grams of fat more.

Which one tastes better? That is highly subjective and there are proponents of both burgers out there. My personal opinion is that the Whopper tastes better than the Big Mac, but again, it’s all about what you like.

So what do you think about the Whopper? Which one is your favorite? Do you prefer the Whopper to the Big Mac?

Tell us about it in the comments and feel free to leave suggestions for future articles. 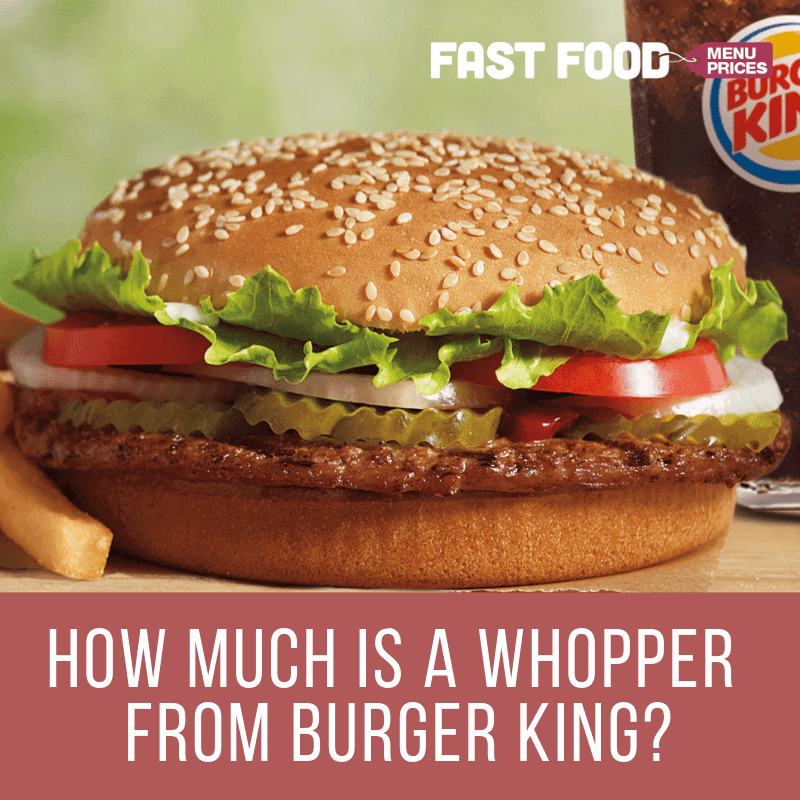