You are here: Fast Food Prices > Why Shake Shack is Worth Billions of Dollars

Shake Shack, a fast service restaurant chain established only in 2004 back in New York City, is now reportedly worth $2.8 billion. This number in itself is already impressive, but even more so when you realize that it’s about the same as what Wendy’s ($2.85 billion) and Papa John’s ($2.81 billion) are worth. Shake Shack’s high market capitalization comes as a surprise, considering that it is hardly comparable to both Wendy’s and Papa John’s in terms of size and spread.

In fact, a closer look at the numbers and seeing them side by side reveal quite an interesting comparative study.

Even though Shake Shack, Wendy’s, and Papa John’s apparently have the same market value, if you take a look at their other numbers you’re definitely in for a surprise.

1. Years in the Business

Shake Shack is by all accounts a ‘newcomer’ as a burger chain, as it opened only 11 years ago in 2004. It originally sprouted from a hot dog cart in Madison Square Park (Manhattan, New York City), and is really more of a neighborhood fixture in NYC.

On the other hand, Wendy’s has been in the market since 1969, when the first Wendy’s restaurant opened in Columbus, Ohio. That’s a good 46 years running, more than 4 times Shake Shack’s number of years serving burgers. Papa John’s was founded only in 1983, but that still makes it 2 decades older than Shake Shack.

If you look at it from the vantage point of number of locations, the numbers don’t make sense either. From the beginning, Shake Shack already said it wasn’t planning on becoming a massive chain. To date, there are only 71 Shake Shack locations nationwide, mostly concentrated in the East Coast of the United States. Internationally, Shake Shack has stores only in the United Kingdom, Russia, Turkey, and the Middle East.

71 locations is nothing compared to Papa John’s 4,600 restaurants worldwide and 6,500 Wendy’s locations in 29 countries around the globe.

Wendy’s annual sales of $2.06 B is 12 times the annual sales of Shake Shack. On same-store sales, there are growth numbers everywhere. Papa John’s for instance reported a 6.7% increase

The numbers beg a lot of questions, but it’s very clear that Shake Shack is worth a ridiculously large amount of money, regardless of how the other numbers look like.

The Reason Behind Shake Shack’s Worth 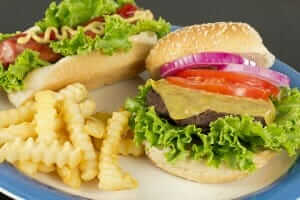 To understand why Shake Shack is worth so many billions, we have to remember that a lot of factors affect market valuation. It’s not just about the number of years you’ve been operating, or how much sales you earn year on year. Market valuation is also about how investors perceive your value to be, and how much investment the put in your company.

In the case of Shake Shack, when investors look at it they don’t see the meager 71 stores that’s currently in place today. What they see instead is the enormous growth potential that the chain exhibits. They look at Shake Shack’s current cult following and think about what this means for the future. Shake Shack is operating in the fast casual market, with stiff competition from both the quick service restaurants and the casual dining restaurants. But it might just be the owning of this space that sets Shake Shack apart and spells potential for its investors.

In terms of growth strategy, Shake Shack is planning to open only about 12 restaurants per year, and this is a far cry from the strategies that you see from Wendy’s, Papa John’s and other fast food giants like McDonald’s and Chipotle.

However, perhaps it’s also the novelty of Shake Shack that makes it so attractive to investors. Unlike a Wendy’s or a McDonald’s that you see in every corner of the world, you only very rarely get to treat yourself to a Shake Shack burger, and this actually gives Shake Shack an edge. Right now, it’s not cliché to be eating at Shake Shack. It’s actually cool.

It also helps to know that compared to the current offerings of the usual fast food restaurants, Shake Shack prides itself in ethically sourced food that is of only the highest quality. Its simple menu and excellent customer service also sets it apart from the rest, giving customers a true Shake Shack experience that they wouldn’t get dining at other restaurants. It’s clear that Shake Shack loyalists as well as investors value it highly, and it looks like the numbers say as much.