You are here: Fast Food Prices > Why Everyone Loves Tropical Smoothie

Are you a deli? Are you a smoothie bar?

To answer those questions, we have to look at the main concept behind Tropical Smoothie.

There are foods that make you feel good when you are eating them. Tropical Smoothie is in the business of serving food that will make you feel good while you’re eating them as much as they’ll make you feel good afterwards. So, Tropical Smoothie is a deli. It is also a smoothie bar. Maybe, it can even develop to be a TexMex later on as they have already started with tacos. For as long as they can find a way to serve something tasty and delicious, in a healthy preparation, they’ll probably include it in their menu. But at the moment, this is what they have…

Tropical Smoothie opens at 7 am and that give you enough time for a full hearty but healthy meal. They have three wrap choices. You can either go Ham & Bacon with Cheddar and low-fat Mozzarella, Grilled Chicken with Tomatoes and Spinach or, Cheese with Spinach and Pesto with all three choices squeezed in a toasted flour tortilla. If you want to go a little heavier, you can have the Peanut Butter Banana Crunch Flatbread. 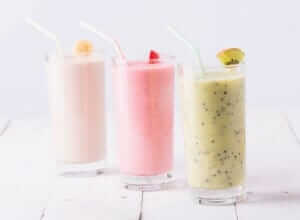 Before leaving for work, you can wash all these down with any of their Supercharged Smoothies in combinations of peanut butter-banana, blueberry-mango, strawberry-banana and others all supercharged with protein to get you through the day with enough energy.

What’s for the Rest of the Day?

Delicious smoothies are always available. Most customers love the popular flavors of their Classic Smoothies with combinations of kiwi-strawberries, mango-pineapple, strawberry-pineapple-orange, strawberry-lime and other delicious combinations that you can only have in dreams and of course, in Tropical Smoothie.

You can enjoy these favorite flavors with the choices of wraps, sandwiches and flatbreads on the deli portion of their menu. You can have a taste of the southeast with the Thai Chicken; that’s juicy grilled chicken with wontons, romaine, cilantro and Thai peanut dressing wrapped in tortilla, the exotic Jamaican Jerk Grilled Chicken with southern rice, black beans and asparagus swimming in Jamaican jerk sauce in a flour tortilla or, take a short trip to the mid-east with the Hummus Veggie: a middle-eastern delight with pepper jack, black beans and asparagus covered with light southwest ranch dressing in a garlic herb tortilla.

If you’ve come with a big appetite, you can fill up with the Rustic Turkey and Apple Club prepared with lean turkey, cheddar, gorgonzola, bacon, Dijon honey mustard and kale and apple slaw piled and served between thinly sliced seed bread.

What’s for the Slimmers and Dieters?

Now, if you are in the process of slimming down and you like to get the most out of what you eat and drink then, Tropical Smoothies’ Superfood Smoothie collection will provide you with the most nutritious and freshest blended superfoods. Enjoy your spinach, acai, pomegranate, cucumber, carrots, Goji and other healthy ingredients in delicious and refreshing smoothies.

Munch while you sip! The best way of enjoying your Superfood Smoothie is to munch on some crunchy leafy greens in between refreshing sips. The Tropical Smoothie salad selection includes the combination of spinach, candied pecans, gorgonzola, peaches, dried cranberries and raspberry vinaigrette for the Loaded Spinach. Or, can have the classic Chicken Caezar with a generous serving of grilled chicken, romaine, parmesan, tomatoes and Caesar Dressing.

One of things people love most about Tropical Smoothie is that they serve healthy food but they never compromise taste. If we take a look at the full menu what do they have?

They have 6 kinds of Wraps, 4 Toasted Sandwiches, 5 Toasted Flatbreads, 4 Tacos, 3 salads and 28 smoothies. Another set of restaurant owners, given the same 18 years of operation, would have used the shotgun approach of including as many entrees to their menu to entice more customers with diverse food preferences.

Tropical Smoothie chose anther road. They have been more cautious in improving their menu. Now, was this a good decision?

Offering less can be seen as a bad idea when you think about the opportunity loss. However, it also limits the possibility of disappointing customers with poor tasting entrees. Considering that Tropical Smoothie is a smoothie bar, they could have thrown everything in the blender and presented 100 smoothies; all for the sake of good health. But, they stuck with those that actually taste good. The same goes for their deli menu with its limited selection.

When you think about it, there is really a lot of sense in it. What’s the point of having 100 smoothies if more than half of them don’t taste good? And besides, most people just cycle within four to five of their favorite smoothie flavors so there’s no point in having more than 28. With Tropical Smoothies cautious approach, at least, those who will actually try all 28 flavors will not be disappointed.

Well, they serve great tasting smoothies, salads and sandwiches that make you even feel greater after eating them. And if you decide to go through the whole menu, you’ll find that none of the entrees is disappointing and everything there has its own bite of flavor.