You are here: Fast Food Prices > Which is the Best Pizza Chain Restaurant?

Pizza is a pretty popular dish. There’s something fantastic about mixing together fresh tomatoes, cheeses, meats and vegetables in a single food that really makes it work. Even fruit adds to the flavor sometimes, like with pineapple on Hawaiian style pizza. Odds are you’ve got a favorite combination of toppings yourself but not every kitchen prepares the same food the same way, or even with the same ingredients. The way things are now, the best pizza chain restaurant is probably Domino’s, Pizza Hut or Papa John’s. Each of these pizzerias has a national reach and they’re only so successful because they sell food people want to buy.

Just about everyone has heard of Domino’s before. They usually have some kind of special going where you can get as many medium pizzas as you want for $5 each when you buy three or more. The value is definitely there but some people don’t just want to eat pizza at a pizza place. Like many others, now Domino’s is stocking up on wings, pasta dishes and other tasty food choices to give people a more engrossing and enjoyable dining experience. It’s hard to say anything bad about this pizza restaurant chain but the others have great deals too.

Pizza Hut probably gets more business than either of these two pizza chains. For some, that would be enough to call it the best pizza chain restaurant out there. They always have some kind of deal going on and checking it out through their website is easy enough (www.pizzahut.com). They’re famous for the $10 large pizza with as many toppings on it as you want. All that meat, cheese and vegetables makes sure you get full on the pizza you purchased. Because of great offers on good food, Pizza Hut is doing well despite heated competition from other kitchens.

Papa John’s has been using the same slogan for years now; “Everything’s better when Papa’s in the house.” Some customers would certainly agree with that statement, or else there’s no way the popular pizza chain would still be in business. Whether they like Papa John’s more than the other two eateries listed here is debatable. As for specials, it’s hard to name any particular one. Papa John’s is always changing up their menu and adding new items and toppings as well as adjusting prices for their food so it’s probably best to check yourself before calling to order. 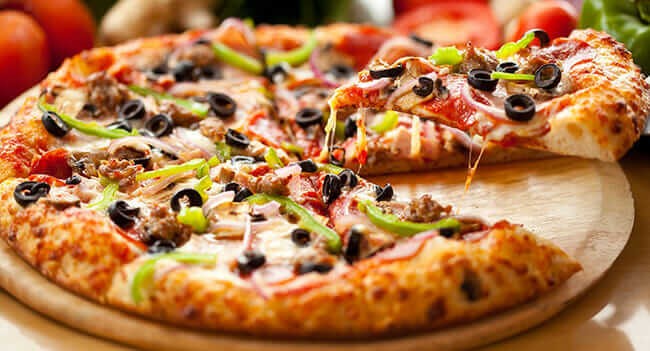 What about Domino’s? From a personal perspective, the sauce just doesn’t measure up to what these other two pizza chains are offering. It’s kind of sweet, like there’s a lot of extra sugar. This has the potential to really kill the whole pizza if you don’t get it while it’s hot. The delivery charges are low compared to these other two restaurants. With lots of locations all over the country, the odds are in your favor there’s a Domino’s near your home, office or other place of occupancy. They do have some fantastic ham and pineapple there even if the sauce isn’t great.

Pizza Hut could be the best pizza chain restaurant in the states right now. There are tons of locations, even some which specialize in simply making pizza and shipping it out. There are still plenty of Pizza Hut restaurants too but now people can get hot, fresh Pizza Hut pizza in the middle of the night too. That’s great news if you happen to get hungry after 8 or 9 PM, when the restaurants tend to close. That $10 deal for the large with anything on it may only apply if you come pick up the food yourself; this aspect of the deal seems to vary from place to place.

Papa John’s is known for their speedy service and reliability, delivering even when other chains have closed or stopped sending out drivers for the evening. They’ve certainly got some money too – they consistently advertise during the Super Bowl, something which is not at all cheap. Those commercials cost millions by the minute to air so they have cash to spend. That doesn’t translate into lower prices for the consumer though. Among these three pizza chain restaurants, Papa John’s consistently charges more for its food than the other two restaurants.

If you don’t have a lot of money but you do want to get a lot of food, Domino’s is probably the best choice for you. Sometimes cheap food is pretty damn good and you might get that feeling after eating something from Domino’s. You might also feel like you just ate some bad pizza, but when that food only costs half (or a third) of what you would pay to eat at another pizza chain, it is a pardonable offense. Domino’s is definitely the chain for people working on a tight budget.

Pizza Hut seems to have a more universal appeal than Domino’s, even if they don’t shell out the big bucks for promotions or high end advertising. The food is consistently good and affordable, plus you can find Pizza Hut restaurants just about anywhere. Big cities usually have several within a couple miles of each other to keep the waits bearable for deliveries. This company is very good at giving people what they want at a price they can afford to pay. If that’s the sign of the best pizza chain restaurant, then Pizza Hut wins this contest hands down.

Finally, the people at Papa John’s sure do talk a good game. The food though leaves something to be desired for some eaters. While there is no perfect pizza place and someone is going to complain at every restaurant, Papa John’s just doesn’t seem to get it. They’re great at pulling people in and getting them to buy their food, but many sites are just too small to allow for a dine-in experience. Would you believe some people still go out to get pizza and want to eat it where they buy it? Papa John’s wouldn’t. The locations are also far apart so deliveries can take a lot of time in some spots.

What is your favorite pizza chain restaurant and why? Let us know in the comments below.