You are here: Fast Food Prices > The Only Tuna Fish Sandwich Recipe You’ll Ever Need

Since there’s not a lot of tuna fish action at the local drive-thru, it’s all on you to produce the goods when you have a hankering for a good, old-fashioned tuna fish sandwich. But don’t even think about slopping a soggy glop of tuna onto some Wonder Bread and noshing at the kitchen sink so as to not to leave crumbs. No, indeed! Tuna is serious business, and you need to settle down and stop being so impatient. It may not be as fast as fast food, but it shouldn’t take you more than 15 minutes to make this perfect tuna sandwich, and that’s only if you’re taking your sweet time about it.

So take a deep breath, crack your knuckles, and get to work making… 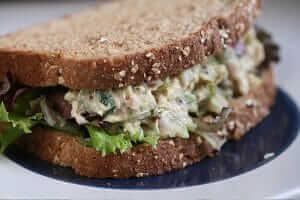 The beauty of the best tuna fish sandwich in the visible universe (and all eleven dimensions of space) is in its simplicity. It’s in the perfect balance of textures and flavors rather than in fancy—and wholly unnecessary—gourmet additions like capers or caviar or some such nonsense.

Step One: Pick the Bread

It starts with the bread. Something dense but not leathery, soft but which the heavy tuna salad won’t turn soggy. A hearty 12-grain, thick-sliced, squeezably soft loaf is best, especially if it’s punctuated with tasty seeds and nutty wheat germ.

Some would say that to be the best tuna fish sandwich in the visible universe (and all eleven dimensions,) that sandwich had better be made with the best cut of the biggest, most tender bluefin tuna in the Mediterranean Sea, lightly seared with cracked pepper and sea salt and shredded by hand. They’d be wrong. The B.T.F.S.I.T.V.U.(A.A.E.D.) is made with plain old canned albacore “white meat” tuna or skipjack “light” tuna. Opt for the flaked tuna rather than the chunked, if possible, and choose tuna packed in water over the stuff that’s packed in oil.

More important than the type of tuna you get is how well you drain it. And you need to drain it really well, or your tuna fish sandwich will be a sad, soggy mess. Now, draining tuna can be tricky if you use the drain-it-with-the-lid method. If you push too hard, the tuna juice squirts you in the eye, and the soggy tuna squishes out the sides. If you don’t push hard enough, you don’t properly drain the tuna, and you’re on your way to sogsville.

The very best way to drain your tuna is to fully disengage the lid with the can opener, but leave it in the can. With the open can on the counter, press the lid gently and s-l-o-w-l-y with four fingers, evenly spaced, until the vast majority of the liquid is sitting on top and you can’t push any further. Dump the liquid, and hold the can perpendicular to the sink while you press some more. Bring the can up as though it’s a rock and you’re going to smash something with it, and then bring it back down swiftly. The liquid will stream instead of drizzle out. When it no longer streams out, you’re done. Don’t cut your fingers when you remove the lid. Use a fork.

First, the mayo. Some like their tuna a little on the dry side, while others like it to resemble pudding. Somewhere in the middle should be just about right. Add your mayo one glop at a time to get the consistency you like. Add a little dash of salt, a pinch of pepper, and a little sprinkle of garlic powder. Mix it up.

Next, add some red onion, celery, and dill pickle: The Holy Trinity of tuna fish salad. These should be very finely chopped. They should be a little bigger than a sliver, but far smaller than a chunk. Properly done, these will provide a subtle crunch and a whisper of flavor in each sumptuous bite. Add as much of each as you like, but err on the generous side.

Spread a little mayo on both pieces of bread, even though there’s mayo in the tuna. Pile the tuna evenly on one slice of bread to a height of at least an inch. Add a couple slices of tomato and two layers of crisp iceberg lettuce. Put the other slice of bread on top. Don’t cut it in half. Voila!

Step Six: Down the Hatch!

It’s almost time to eat! Put that sandwich on a plate. Add some chips. Fetch a soda or a glass of iced tea and a napkin. Sit down at the table to savor your sandwich, or take it to the couch, or sit out on the patio—wherever you think you’ll enjoy it most. Relax, put your napkin on your lap, take a moment to admire your beautiful sandwich, and eat the everlovin’ heck out of it.