You are here: Fast Food Prices > Top 10 Reasons to Head to KFC or Taco Bell for Breakfast 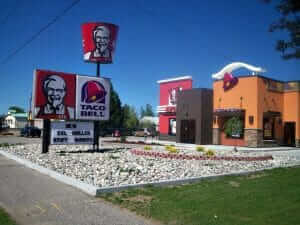 Breakfast is the most important meal of the day. When you eat your breakfast right, you’re powered up for the rest of the day. Eat it wrong, and who knows what else will go wrong. But the time for scrambled eggs and muffins is so passé, because what could be better for breakfast than something really unique?

The KFC/Taco Bell menu items for breakfast have evolved through the years, and depend on your location. But if it’s available in yours, you should definitely give it a go. This is not just because you won’t find them anywhere else, but because you want to start your day with something really memorable.

These are some of the most interesting items that have appeared in the breakfast menus of both KFC and Taco Bell, around the world:

A burrito can give you satisfaction like no other, so who says you can’t have one for breakfast? Taco Bell’s Grande Scrambler is all you need to get the energy for the day. Loaded with steak, eggs, potatoes, real cheddar cheese, nacho cheese sauce, reduced fat sour cream, and pico de gallo, this wrap is packed with goodness and it’s something that you can really start the day with.

Say you’re in a hurry and you want to take your breakfast on the go, perhaps as a neatly shaped sandwich. Now forget all you know about your typical breakfast sandwich, because Taco Bell has a hexagonal, handheld breakfast made especially for you.

So what exactly can you find inside? Basically everything you can think of that makes breakfast great: scrambled eggs, cheese, and even a hashbrown. This special California variety also has bacon, pico de gallo and guacamole to give that extra kick. The Breakfast Crunchwrap Country is a bit more standard, and gives you a sausage patty and Southern gravy instead.

KFC Australia has managed to combine 2 of the most popular breakfast staples in a single Twister. The breakfast version of the world-famous Twister is basically a warm tortilla that houses KFC’s Original Tenders, but with 2 pieces of short cut bacon, egg, cheese, and its signature BBQ sauce.

If you’re craving for a burger, you can now have one first thing in the morning when you go to KFC Singapore. In a sesame seed bun you’ll basically get fluffy eggs, crispy bacon, and a juicy tomato.

Pancakes are a breakfast staple, but why settle for the usual pancakes when you can have them special? KFC Singapore gives you something to look forward to as you start your day with three fluffy and golden brown pancakes filled with blueberries. This is served with butter and syrup, and of course a hash brown to complete the meal.

In Australia, you can head to a KFC and get a crusty bread roll filled with the goodness of breakfast. Bringing back classic favorites, you basically get 2 pieces of short cut bacon and a fluffy egg, both cooked in the store to give you the breakfast you want. They then add BBQ sauce to give you an extra kick.

Porridge is a local favorite in Singapore, and KFC has given it a unique twist to make it the special A.M. Porridge. Freshly prepared the local way with rice, chopped spring onions, and shallots, this breakfast porridge has chunks of the Original Recipe chicken fillet. Basically, it’s that warm comforting bowl of breakfast that’s enough to get you ready for the day ahead.

Back at Taco Bell, there’s a breakfast twist on your favorite grilled taco, where what you get inside are bacon, egg, and cheese. You’re also free to customize your grilled taco with several add-ons, if you’re willing to pay the extra price. You can add whatever you want; potatoes, guacamole, pico de gallo, nacho cheese sauce, Southern gravy, reduced fat sour cream, or creamy Jalapeno sauce.

A more simple breakfast burrito compared to the packed scrambler, this one’s perfect if you just need a little extra push to start the day. In a tortilla wrap you get crispy bacon, egg, and yummy cheese. At $1.79, this is all you need for a good start.

The Quesalupa is one of Taco Bell’s more unique offerings, and this one just got better because you can have it for breakfast. The chewy Chalupa shell that’s stuffed with melted cheese basically wraps around your bacon, eggs, and potatoes, then topped with even more cheese. You’ll never need to drag yourself just to have breakfast ever again.