You are here: Fast Food Prices > The Habit: The Best Burger Habit?

A burger joint that has managed to stay alive since 1969 deserves to be called a habit. The burger joint known simply as “The Habit” has been making waves in the fast-food industry. What originally started out as a family business has now grown into a nation-wide sensation that has been sweeping taste buds from different walks of life.

Focusing on a principle that aims to “respect the burger,” the Habit Burger Grill has earned the spot as one of the best fast-food restaurants in the United States. And in a country that is closely associated with fast-food, earning the title of the best in a bloody sea of competition is not without due cause.

This interesting principle is based on the premise that the burger is considered a tenet of American culture. And according to The Habit, you don’t just fry something as iconic as that. That’s why they grill their burgers over an open flame. This is what makes those signature black grill marks on their patties and buns. Using that principle, they have earned not just the esteem of their patties, but also of the American burger-consuming populace.

The Habit has two flagship burgers. The Charbuger and its older brother, the Double Charburger. As their names imply, you have a choice of a single or double patty full of the greasy good stuff. They pride themselves in using the leanest patties in the market. They are harmonized combinations of beef, tomatoes, pickles and onions that have been carefully fried to caramel sweetness. These burgers are the reason why The Habit was chosen as “the best burger restaurant” by American consumers. 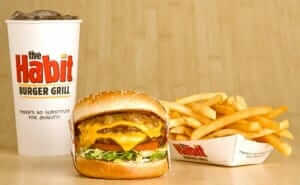 On top of these two signature buns, The Habit also hosts several other flavours such as the BBQ Bacon Charburger, Teriyaki Charburger and the Mushroo Char. All these names inspire a curiosity to try them all out even after you’ve come to love their classic Charburger duo.

The secondary items on their menu are not to be ignored as well. They have sandwiches and salads that are aimed at pleasing the patron who has had one too many burgers for the day. Their menu boasts of 6 distinct sandwich types that are all char-grilled on premium buns.

And since The Habit respects the burger, they wouldn’t dare sell burgers without French Fries. Along with their onion rings, The Habit plays host to some of the crispiest and tastiest fried sides in the market. The Habit claims to use only fat-free oil when frying to keep things on the healthy side. Couple that with Idaho potatoes and naturally sweet, white onions and you have the perfect side to what they claim to be the perfect burgers.

All those sumptuous burgers and fried goodness is also going to need the best malts and shakes. The Habit is no stranger to this principle as well. They use real ice cream in their shakes which you can get in strawberry, chocolate, coffee and even vanilla.

The Habit doesn’t cut corners with their burgers, but that doesn’t mean their char-grilled burgers are going to come at a hefty price. For about $7, you can have yourself a full meal consisting of their signature double charburger, a side of fries and a drink. For a place that provides daily-ground beef, the price isn’t that bad.

Just like any other burger joint, The Habit wants to expand. On top of having over 100 branches all around the country as of today, they also have food trucks that visit various localities to show people what true respect to a burger tastes like.

Several other reviews of The Habit would show that their patties contain a small amount of fat, about 15% percent fat for most patties. This shows how dedicated these people are to providing the best-tasting beef in town without the awkward taste of beef fat in your bites.

Another reason why The Habit was named one of the best burgers in the country is the fact that their burgers aren’t overpowered by the buns. Any enthusiast would despise a burger that had more bread than patty. That’s not how to respect a burger. It has to outweigh the buns. It has to be the main star of the show. And that is exactly how they serve it at The Habit.

It goes without saying that there are countless burger brands in the United States. Finding the right one takes time and dedication. But that time and dedication does not come from the consumer. It has to come from the griller who knows how to handle their patties. And The Habit is one such griller. As of today, The Habit is still expanding and providing high-quality burgers to the ever-changing tastes of American consumers.