You are here: Fast Food Prices > The Best Restaurants for Hot Wings in the United States

The Best Restaurants for Hot Wings in the United States

Buffalo wings, such as the KFC Hot Wings, are not made from buffalo meat but from chicken wings, an original creation of Teressa and Frank Bellissimo. Keep in mind that not all Buffalo wings are created equal, however, since it’s not just the sauce that matters in the well-loved dish – the perfect Buffalo wings are crispy on the outside, tender and juicy on the inside, and fresh from the fryer as well as completely coated in heavenly sauce.  Even the sauce should be the perfect balance between spicy and buttery without the unnecessary greasy feel in the mouth. 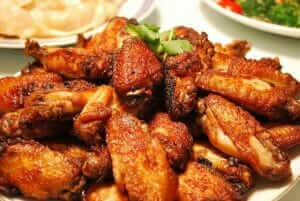 To say that it is not an easy task to get the perfect appearance, texture and flavor for Buffalo wings is an understatement. Fortunately, you don’t have to burn the house down just to experiment with the dish and you never have to go far and wide for it. You just have to live near one of these restaurants for the best Buffalo wings in the United States!

While Colonel Sanders may not have invented fried chicken or Buffalo wings, he was certainly an instrumental figure in making both of these dishes a part of mainstream American contemporary culinary culture. With the Nashville Hot Chicken, also known as the KFC Hot Wings, the sauce may be absent but you can be assured that it can give other Buffalo wings a run for their money.

The wings are coated with a crispy and crunchy exterior with just the right balance between spicy and fiery hot while its meat is the signature KFC texture – juicy, moist and tender with every bite speaking of the care with which KFC handles its chicken.  The chicken wings are also served piping-hot so their flavors remain intact while the meat is so tender that it can be pulled off the bone with ease.

The result: Chicken bones piled on your plate with the meat happily dancing in your tummy while you lick off the remaining flavors on your fingers.  You need not worry about the heat either as it will not require pitchers of water to take off although you can munch on the pickles for sweet, cool relief.

You will even overlook the lack of a sauce, as in the traditional Buffalo wings, since the spiciness is already incorporated in the batter.  Besides, when the chicken itself is as good as KFC chicken, sauces can become redundant.

The best thing about the KFC Buffalo wings: You can get them virtually anywhere in the United States from modest towns to metropolitan cities, thanks to the fact that KFC has thousands of outlets in America.

If you are looking for a non-fast-food experience, then head on over to Winger’s; although the mini-chain has significantly fewer number of locations than KFC, the Utah-based restaurant chain offers its Buffalo wings in two ways, namely, with and without the batter; just tell the server about your preference. The chicken wings are usually battered before deep frying with the finished product served with its addictive sauce, which you can buy in bottles while the chicken wings can be ordered by the bucket.

Ask for the restaurant’s craft beer to go along with your spicy Buffalo wings. You will also enjoy the classic rock music streaming from the speakers while enjoying your meal – truly, an ambiance unlike that in KFC restaurants.

Located near the Indiana University in Gables, Bloomington, BuffaLouie’s has a sporty counter-serve ambiance that college students love in their eateries. You should be prepared for a packed house because its Buffalo wings are among the best in the state, if not the country. You can choose from 17 homemade sauces to accompany your crispy and crunchy yet tender, juicy and moist delish chicken wings – or better yet, start experimenting with the basic Buffalo sauce before proceeding to the next ones.

Order the sandwiches and beer, too, which nicely complement the spicy chicken wings.  Watch television or talk with your friends while enjoying your meal.

Located in Chicago City, the Bird’s Nest is the home of plump, juicy and flavorful Buffalo wings that will have you coming back for more.  You can even share a single order as the wings are among the largest you will find in restaurants. You should order its famous blue cheese dip, which will bring out the nuances of the chicken wings while still remaining true to its flavors.

Other places for great Buffalo wings are the Three Dollar Café in Atlanta with their meaty, larger, and crispy chicken wings; the East Coast Wings & Grill in North Carolina wits 75 flavors for its chicken wings, not to mention its award-winning Buffalo-style wings; and House of Wings in Chicago with its super crispy, perfectly friend, and flavor-packed wings.  Now all you have to do is find the dining partner who will enjoy Buffalo wings as much as you do!