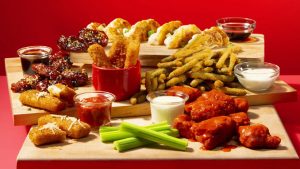 If you’re a fan of enjoying savory appetizers in a fun environment, what could be better than Endless Apps at TGI Friday’s? “Endless Apps” refers to limitless appetizers, and TGI Friday’s has a vast range of tasty appetizers that you can either enjoy before your meal or in place of a meal. The franchise has offered this deal for a limited time on more than one occasion, and it’s a welcomed addition to the menu – as most endless, bottomless, unlimited deals would be. While your tastebuds are warming up, let’s dig into this TGI Friday’s Endless Apps Review.

Crave-worthy appetizers have been a part of TGI Fridays since the beginning. The franchise introduced the Endless Apps deal for “people who don’t like to see a good time end.” You can pick out one appetizer, then another, then another until your heart and tummy are content. With this deal, customers can order unlimited refills. It was launched in 2019 for a limited time, but the deal was so popular that TGI Friday’s announced that the deal has made a comeback, and this time, it’s here to stay.

Unfortunately, not all of the appetizers listed in TGI Friday’s menu aren’t available in the Endless Apps deal. Only a few selected appetizers from the actual menu and a few other added items are available. These include the following:

Can’t decide which appetizer to choose? That’s the beauty of this deal – you can order more than one item. You’ll likely be allowed only to order one item at a time, but that gives you enough time to decide your ordering strategy. Do you order the newer items first and work your way backward to the classics? Do you order alphabetically? Do you opt for a more adventurous approach? Close your eyes and point at the menu. As the deal suggests, the possibilities are endless.

The Endless Apps are all delicious- I know, I’ve tried each of them. They’re all rich in flavor and packed with savory ingredients, mostly fried and saucy. My only complaint would be that every once in a while, something tastes like it’s been sitting in the kitchen too long, or it was re-heated. I’ve noticed this more with the loaded potato skins- almost as if they’ve been re-cooked or overcooked. I can overlook this as long as they’re loaded with cheese, bacon, and sour cream, which they are, but in a case such as this, my next order would be something less “heavy” and dense. The buffalo wings are always a great choice- the chicken is juicy and tender, and each piece is drenched in sauce. The Sesame Jack Chicken Strips are also on my list of favorites. Golden brown chicken breast strips are coated with crispy Japanese panko breadcrumbs and toasted sesame seeds, then tossed in their famous Jack Daniel’s sauce. I love this sauce with its sweet, barbeque flavors. Overall, I’d say you can’t go wrong with any of the choices.

Ordering the Endless Apps is like a party for your tastebuds, and like most parties, the food is delicious and non-nutritious. Most of the items are full of carbs, calories, and sodium. For example, the Boneless Buffalo Wings soaked in the sauce has 1,190 calories and 4,450 mg of sodium. You might think the crispy Green Bean Fries would be a better choice, but those come with 900 calories and 1,720 mg of sodium. The Fried Pickles only have 110 calories, but be careful if you start dipping them in rich sauces. If you’re looking for healthy, you might skip the appetizers altogether and go for a Cobb Salad (also savory and filling).

Some restaurants only offer their special deals on certain days or during specific hours. However, TGI Friday’s offers its Endless Apps all day, every day, even though it was previously only available from 9 PM to closing. Now you can pop in any time to get this deal, so it’s like Happy Hour every hour, every day. The options are some of my top favorites, my kids and friends enjoy them, and the price is unbeatable. This is a fantastic deal, and it’s definitely worth it.

For just $10, you can have endless refills and a wide array of choices, which makes this an incredible deal. The fact that you can order it any time any day makes it even sweeter. Paired with a $5 cocktail during Happy Hour, and you’re set.

Below is the calorie count for the appetizers available with this deal. For a complete nutritional list, visit TGI Friday’s nutrition page.

TGI Friday’s Endless Apps are only $10 per person. Considering each appetizer on its own is between $9 and $12, it’s quite a deal. You likely won’t be permitted to order one Endless App and feed a table of 4 to 5 people, but if there are just one or two people in your party, you might get away with one order. Just be sure to tip your waitstaff very well!

If you’d like to keep up with all the special deals and promos going on, be sure to join TGIFriday’s Rewards program.

What do you think about our TGI Friday’s Endless Apps Review?

Have you tried the Endless Apps deal? Which choice has been your favorite? Do you like to order one of each? Or do you prefer one dish over the others? We’d love to hear your thoughts in the comments below.